Dabo Has A Ball Gearing Up for Bowl 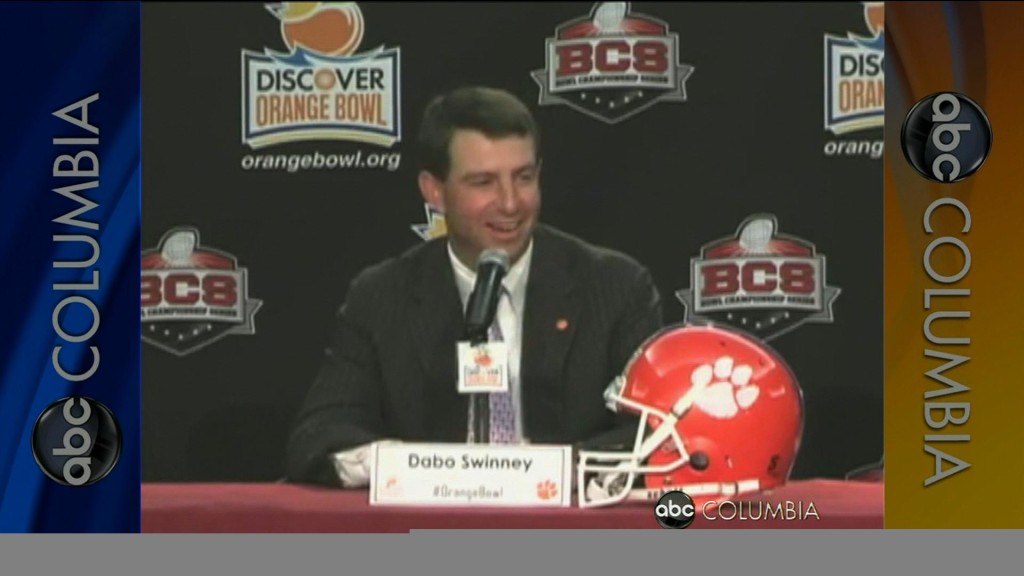 FT. LAUDERDALE, FL (Clemson Athletics) – When he walked into the Marriott Resort and Spa for the 2012 Discover Orange Bowl press conference Tuesday, the first person Clemson Head Coach Dabo Swinney saw was Danny Ford, who was sitting in a lobby chair drinking a cup of coffee. Of all people, Swinney was not expecting to see the former Clemson coach as he was walking in to speak to the 100 or so writers and photographers that had descended upon Miami, FL to cover Wednesday’s Orange Bowl against No. 23 West Virginia. Ford, who was inducted into the Orange Bowl Hall of Fame later in the day, was the head coach of the Tigers the last time Clemson made it to South Beach’s grand bowl game, a 22-15 victory over Nebraska in the 1982 Orange Bowl, which capped the program’s only national championship. “I told him they should have put him in the Hall of Fame at least 10 years ago here; we might have made it earlier,” Swinney said. “It is really neat to see how this has all come together. For this to be the year that Coach Ford is also being inducted into the Hall of Fame and Clemson makes it back to the Orange Bowl for the first time in 30 years and wins the ACC for the first time in 20 years, it’s special.” Swinney described the 1982 Orange Bowl as the program’s “greatest memory,” and says he is thrilled to be part of the team that brought No. 14 Clemson back to the Orange Bowl for the first time since that magical night on January 1, 1982. “So many people talk about it. Thirty years, that’s a long time. You’ve got kids that were here that are now grownups, and you’ve got grownups that are gray headed old men, and they’re writing you letters saying, `hey, man, I’d like to get back there one more time.’ ” The Tigers (10-3) are back and are looking to grab hold of the opportunity that awaits them should they beat a very good West Virginia team. Clemson tight end Dwayne Allen says the Tigers have approached this whole week in Miami as a business trip and says the team’s only focus is winning. Swinney backed up Allen’s claim, saying there were no curfew issues or any drama of any kind during the team’s entire trip to South Florida, which started on Dec. 27. “There’s a lot to balance here,” Swinney said. “I think we’ve done as good a job as we possibly can. I think our players have done a tremendous job. We’ve had no curfew issues, we’ve had nobody missing anything, and we’ve had no drama. Nothing! You know, that’s a real sign to me that they’re focused. “It’s a sign to me that the leadership has done a great job. We’ve been down here for quite a while, and to have 100 something 18 to 22 year olds storm Miami all at one time for a little over a week, that’s pretty impressive.” Now the question is, is that enough to bring down a good West Virginia team? The Mountaineers are extremely explosive on offense with weapons such as quarterback Geno Smith (3,978 yards) and wide receivers Tavon Austin (191 all-purpose yards per game) and Stedman Bailey (1,197 yards, 11 TDs). “They throw the ball for a million yards,” Swinney said. “It is like forty something times a game, and he’s completing 65 percent of his passes. We’ve got to be able to affect the quarterback, and the way to do that, one way is through coverage. You’ve got to be really disciplined with your coverage. People have to be where they’re supposed to be. You’ve got to change it up. If you just do one thing, they’re going to lock in on you pretty quick. They’ve got answers.” Clemson presents the same kind of challenge for the Mountaineers. Quarterback Tajh Boyd has thrown for 3,578 yards and 31 touchdowns, while wide receiver Sammy Watkins has broken just about every receiving record at Clemson and in the ACC with 77 catches for 1,153 yards and 11 touchdowns. But where the Tigers have the biggest advantage is with Allen. The Mackey Award Winner caught 48 passes for 577 yards and eight touchdowns this season. Covering an athletic tight end has been the Achilles heel for West Virginia’s defense this season, and even more now that strong safety Terence Garvin is out after having knee surgery last month. “Dwayne is 6-foot-4, 255 pounds, but he runs like a wideout,” Swinney said. “He blocks like a tackle and has really improved in other parts of his game as far as running with the ball after the catch and his flexibility. He’s got great ball skills. He’s got a high football IQ. So you put those things together, you’re going to get a very, very good football player. “It’s hard for people to match up with a guy like that. I mean, what do you do? Do you play nickel the whole game? Match up a little guy on him? Put a linebacker on him? He’s just a tough guy for defensive people to deal with, and you’d better know where he is. But in order to make him effective, you need other people.” And those people have made Clemson into a team, and for the first time in 30 years Clemson is back in the Orange Bowl. Now they have to seize the moment.