Clemson Drops Another To Duke 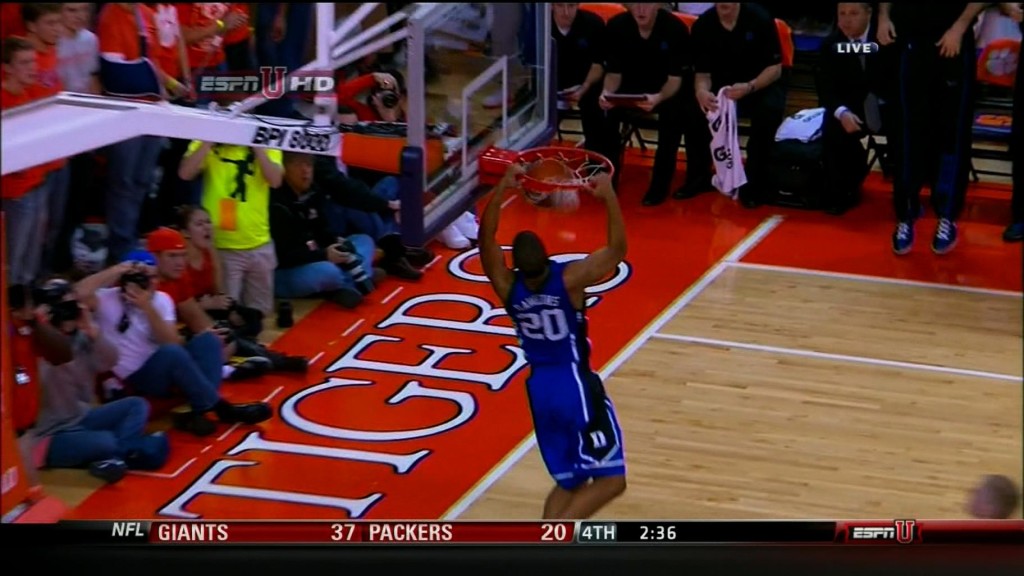 CLEMSON, S.C. (AP) — Andre Dawkins hasn’t always been counted on to make the winning plays at Duke. Maybe that will change after Dawkins’ performance at Clemson. Dawkins, a 6-foot-4 junior, has mostly come off the bench in his college career, starting 16 of 91 games at Duke. But Dawkins outshone the starters, making five 3-pointers and scoring 24 points to help Duke (No. 6 ESPN/USA Today, No. 8 AP) beat Clemson 73-66 Sunday night. This marks the 26th loss against Duke for Clemson in the last 28 times the two schools have met. Dawkins’ showing was all the more clutch since star guards Austin Rivers and Seth Curry combined for 13 points, less than half their usual production of almost 28 points a game. “Andre is capable of that if we do a good job getting him open,” Duke forward Mason Plumlee said. “He created stuff for himself as well. He met the challenge today and played just unbelievable.” The Blue Devils (15-2, 3-0 Atlantic Coast Conference) overcame a sluggish start to pull away from the Tigers (9-8, 1-2). Duke had to overcome a late rally by Clemson, which cut a 13-point lead to 68-64 in the final minute on two 3-pointers by Andre Young. But Dawkins made three foul shots down the stretch as the Blue Devils beat Clemson for the 26th time in the last 28 meetings. If Dawkins “has a bad night, we’re going to win the game,” Tigers coach Brad Brownell said. Milton Jennings had 16 points for the Tigers and Devin Booker added 12 points and 13 rebounds. Duke looked as if it had put the game out of reach when it opened the second half on a 14-7 run. Quinn Cook had a jumper and a 3-pointer and Seth Curry added a bucket. Miles Plumlee put back his brother Mason’s miss for two more points. By the time Dawkins made his third 3-pointer of the game, the Blue Devils were ahead 46-33. The Blue Devils were still in front by 10 points on Rivers’ layup less with less than seven minutes to go when Clemson put on a final charge. Andre Young hit a 3-pointer and K.J. McDaniel a basket to cut the lead to 65-61. After Dawkins answered with his final three, Young came back with another long-range shot to bring the Tigers within four one last time. That’s when Dawkins extended the margin with his foul shots and Clemson could not respond. Dawkins said he was comfortable in his role, providing Duke a spark in whatever area’s lacking during a game. “Pretty much everybody on this team can score the ball, so I doubt if you’ll see 20 points game after game,” Dawkins said. “But I think if I stay focused and keep working like I have, I can be a little bit more consistent than I have been.” Consistency has been Dawkins’ problem this season. This was his eighth showing in double figures this season, two points shy of his year’s best of 26 in a win over Michigan State in November. But he totaled 14 points in four straight games leading into ACC play. Duke coach Mike Krzyzewski said Dawkins is growing into a key player for the Blue Devils. “The last two games, Andre’s been terrific. He built on that coming into this one,” said Krzyzewski, who won his 915th college game. Mason Plumlee scored 12 points and Cook had 10 for the Blue Devils. Miles Plumlee had a game-high 14 rebounds. Clemson drew a large crowd to Littlejohn Coliseum, partly because of last week’s 20-point win over Florida State in the ACC opener and partly because of the football team’s visiting recruits. Duke gutted out a 61-58 win over No. 16 Virginia on Thursday night and was prepared for a similar struggle at Littlejohn Coliseum. The Blue Devils came in having won 10 of their past 11 games at Littlejohn Coliseum. Krzyzewski was so upset after Tanner Smith’s unchallenged drive to the hoop, he called timeout less than two minutes in and replaced his five starters. Clemson’s lead eventually reached 16-7 on Devin Coleman’s foul shot with 11:46 to go in the half. That’s when Duke began to find its offense. Ryan Kelly scored five points in a two minute span to draw the Blue Devils to 18-14. Mason Plumlee’s three-point play with 5:29 left gave Duke its first lead of the game, 21-20. Seth Curry followed with a high-arcing 3-pointer over Clemson’s 7-foot-2 center Catalin Baciu. Andre Dawkins closed the half with eight straight points and Duke took a 32-28 lead into the break. The Tigers lost a second straight ACC game after opening league play with a 79-59 win over Florida State last week.