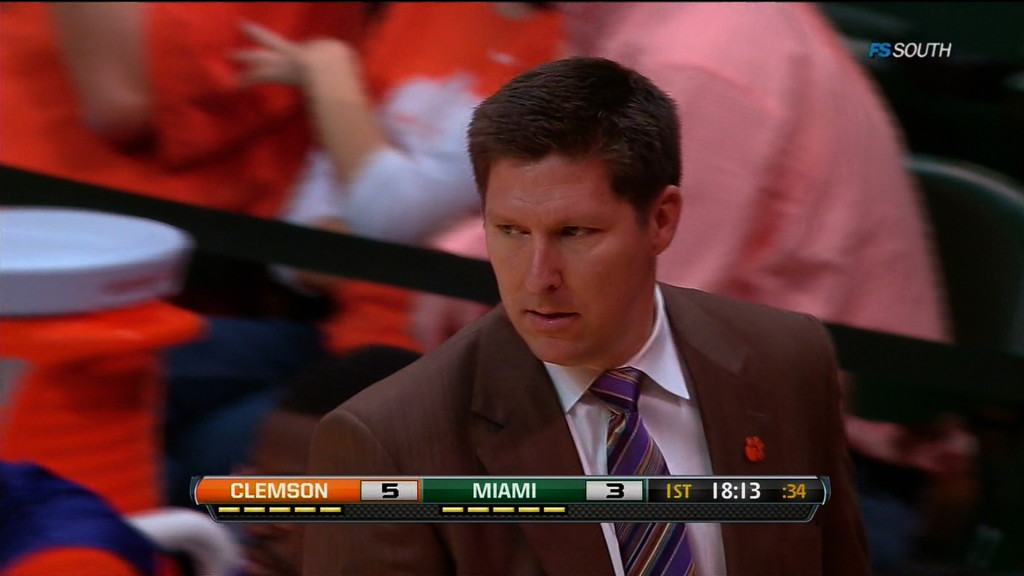 CORAL GABLES, Fla. (AP) — Malcolm Grant scored 16 points and made the game-clinching interception with less than 5 seconds left Wednesday to help the Miami Hurricanes beat Clemson 76-73. Hurricanes freshman Shane Larkin sank both ends of a one-and-one — his only points — for the game’s final points with 5.4 seconds to go. Grant then picked off a pass by Tanner Smith. Miami (10-6, 1-2 Atlantic Coast Conference) won for the first time in six games against Clemson since February 2008. The Tigers (9-9, 1-3) are on the verge of falling below .500 for the first time this season. Kenny Kadji had 14 points for the Hurricanes. Their point total was a season high against Clemson, ranked 19th in the nation in scoring defense at 58.6 points per game. The Tigers twice had the ball trailing by 3 in the final minute. Smith shot an air ball on a fallaway jumper before Milton Jennings scored on a follow to make it 74-73. After Larkin’s free throws, Smith had the ball in transition above the top of the key but threw a pass directly to Grant. Smith scored 18 points in the first 17 minutes but hurt his right hand. He continued to play and finished with 23 points, but he also had five turnovers. The Hurricanes shot 52 percent and had runs of 13 and 12 consecutive points. Grant shot 4 for 7 from 3-point range and had four assists. Trey McKinney Jones added 12 points and six rebounds. The Hurricanes took a seven-point lead early in the second half, but Clemson gradually erased the gap and went up 60-59 on a follow by Catalin Baciu with 8:20 left. The Tigers built the lead to 64-60, but the Hurricanes responded with a 12-0 run. Kadji’s two free throws put them ahead to stay, 65-64. That was the 11th and final lead change. Rion Brown scored on an alley-oop dunk for a 74-66 lead with 1:31 left, before Clemson made one final charge. The Hurricanes scored on six consecutive possessions during a 13-0 run that gave them a 19-8 lead after 6 1/2 minutes. Smith led the Tigers’ comeback, and a 3-pointer by Bryan Narcisse pulled them even at 29-all. A pair of three-point plays by Kadji helped Miami take a 42-39 halftime lead. Copyright by STATS LLC and The Associated Press