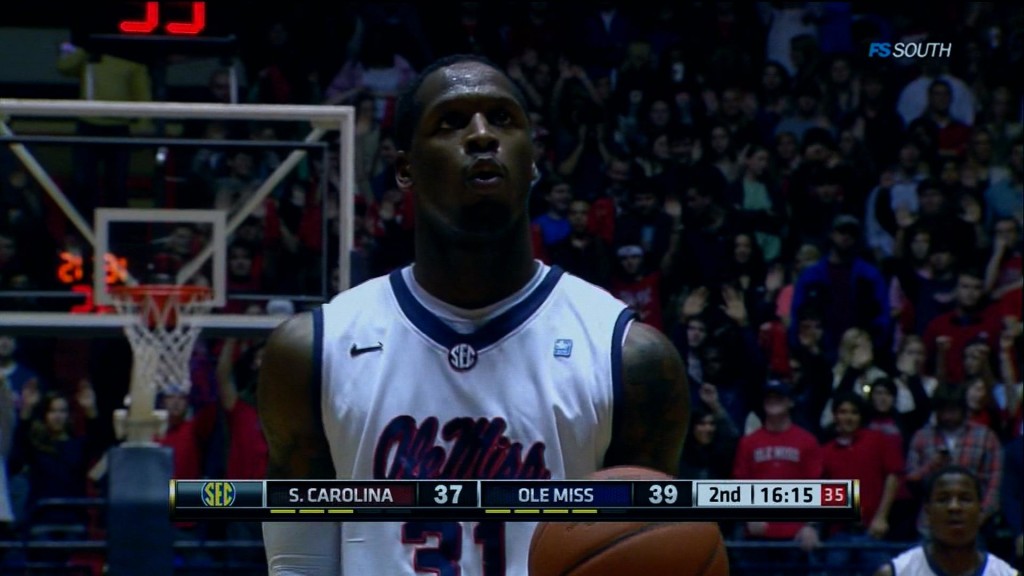 OXFORD, Miss.(Associated Press) — Terrance Henry scored 15 points, Irmo native Murphy Holloway added 14 points and Mississippi edged South Carolina 66-62 on Saturday night. Ole Miss (14-7, 4-3 Southeastern Conference) led for most of the night but had to fend off a late South Carolina rally to win. Henry made a 3-pointer from the corner with 16 seconds left that sealed the victory. Nick Williams scored 12 points and Jelan Kendrick added a career-high 11 off the bench. South Carolina (9-11, 1-5) was led by Malik Cooke’s 17 points. Brenton Williams added 15 as the Gamecocks lost for the fifth time in six games. As expected, it was a half-court, deliberate game featuring two teams that specialize in defense and struggle to put the ball in the basket. Ole Miss had 18 turnovers, but made up for that ugly number by shooting 49 percent from the field (24 of 49) and outrebounding the Gamecocks 38-28. The Rebels led 60-53 with 5:55 remaining, but South Carolina made a run. The Gamecocks pulled within 63-62 with 48 seconds left, but Cooke missed a free throw that could have tied the game. On the next possession, Ole Miss point guard Jarvis Summers found Henry in the corner for a wide-open 3-pointer, and it splashed through the hoop to seal the win. Holloway added 11 rebounds for a double-double against his former team. In a strange odyssey, he left Ole Miss after his sophomore season in 2010, transferring to South Carolina to be closer to his family which lives just outside of Columbia, S.C. He sat out last season because of NCAA transfer rules and then decided that he wanted to transfer back to Ole Miss. It wasn’t clear if Holloway would be allowed to play this season until the fall, when the NCAA and SEC cleared his return to the Rebels. He’s been outstanding this season, epitomizing the Rebels’ hard-nosed approach. He came into the game averaging 10.2 points and 9.3 rebounds despite an unorthodox left-handed shooting stroke, relying instead on relentless energy around the basket. Against the Gamecocks, he made 4 of 7 shots from the field but shot just 6 of 13 from the free-throw line. Ole Miss led by as many as 10 points in the first half, but had to settle for a 31-28 halftime lead after the Gamecocks went on a late run. Kendrick came off the bench to score seven points for the Rebels and did a serviceable job running the offense while starting point guard Jarvis Summers was on the bench with foul trouble. South Carolina briefly took the lead early in the second half, but Ole Miss quickly regained control, using the bulk of Holloway and Reginald Buckner to control the paint. Buckner had three blocked shots. South Carolina has played much better over the past week, beating Alabama on Wednesday after losing its first four SEC games. But the Gamecocks shot just 40 percent from the field (24 of 60) against the Rebels and gave up 14 offensive rebounds.