Tigers Get by Wake Forest 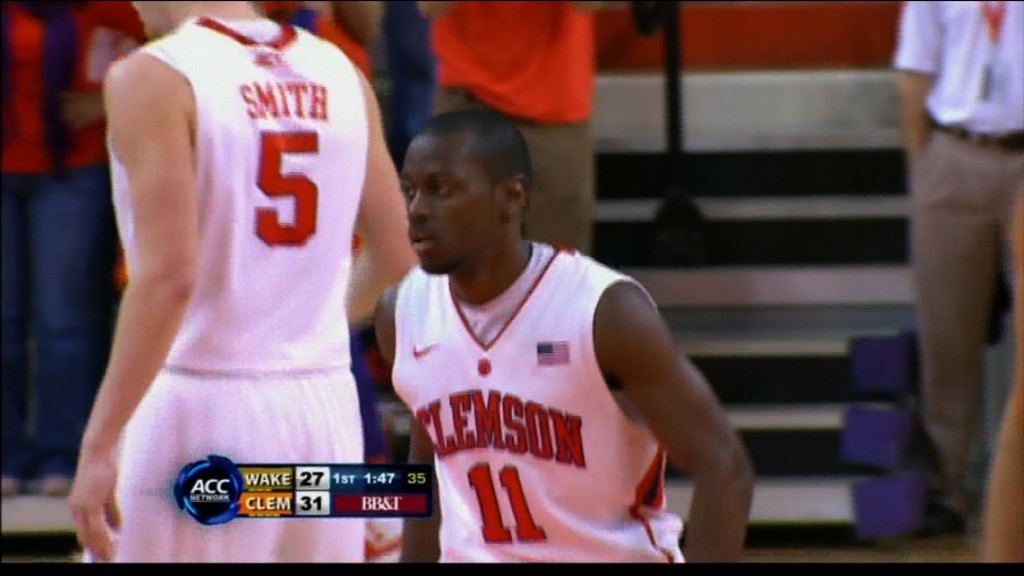 CLEMSON, S.C. (Associated Press) — Andre Young had 19 points off three 3-pointers to lift Clemson to its second straight win in a 71-60 victory over Wake Forest on Saturday. Devin Booker scored 16 points and Tanner Smith added 13 for the Tigers (11-9, 3-3 Atlantic Coast Conference), who shook off an awful start to send Wake Forest to its fifth loss in five games. Clemson took control with a 13-4 run early in the second half where Young scored six points and Booker had four. The Tigers pressured the Demon Deacons (11-10, 2-5) into four straight turnovers during the stretch, scoring off each one to move in front 51-39 with 12:25 to play. Wake Forest never got closer than 10 points the rest of the way. C.J. Harris scored 19 points to lead the Demon Deacons. Young, the 5-foot-9 senior, had set a career high with 29 points and seven 3s in the Tigers last game a week ago, a win over Georgia Tech. Bryan Narcisse had 11 points, the fourth Clemson player to hit double figures in this one. Booker had seven rebounds, three blocks and three assists for Clemson. Travis McKie added 13 points and 12 rebounds for the Demon Deacons. But starting guard Tony Chenault shot just 1 of 7, including 1 of 5 from behind the arc to finish with 3 points, seven fewer than his average. Clemson and Wake Forest each hoped to gain some traction in the race to avoid the bottom of the ACC. Both came in as two-win league teams, just ahead of one-win Virginia Tech and Georgia Tech in last place. The Demon Deacons had lost four of five coming in while the Tigers broke a three-game league losing streak last Saturday, 64-62, to the Yellow Jackets. The Demon Deacons showed more urgency at first, racing to 6-0 lead and eventually moving in front 19-13. Clemson couldn’t buy a bucket, starting an ice cold 1 of 15 from the floor. That changed midway through the period when Clemson called on its defense to spark a 23-10 run the final eight minutes of the half. Tanner Smith hit a 3-pointer to open the charge, then he and Devin Booker had breakaway jams off Wake Forest turnovers as Clemson took its first lead, 20-19. Milton Jennings basket put the Tigers in front for good, 26-25. Young followed with a 3-pointer and a basket before Smith brought the Littlejohn crowd to its feet with a 3-pointer as time ran out in the half for a 36-29 lead. The Tigers, so awful from the outside early on, rebounded to go 13 of 20. They scored on 15 of their final 17 possessions of the half and had only two turnovers. Clemson kept its touch — and the ball — in the second half. The Tigers finished with just eight turnovers and collected 10 steals on Wake Forest.