Clemson Comes Up Short At Virginia 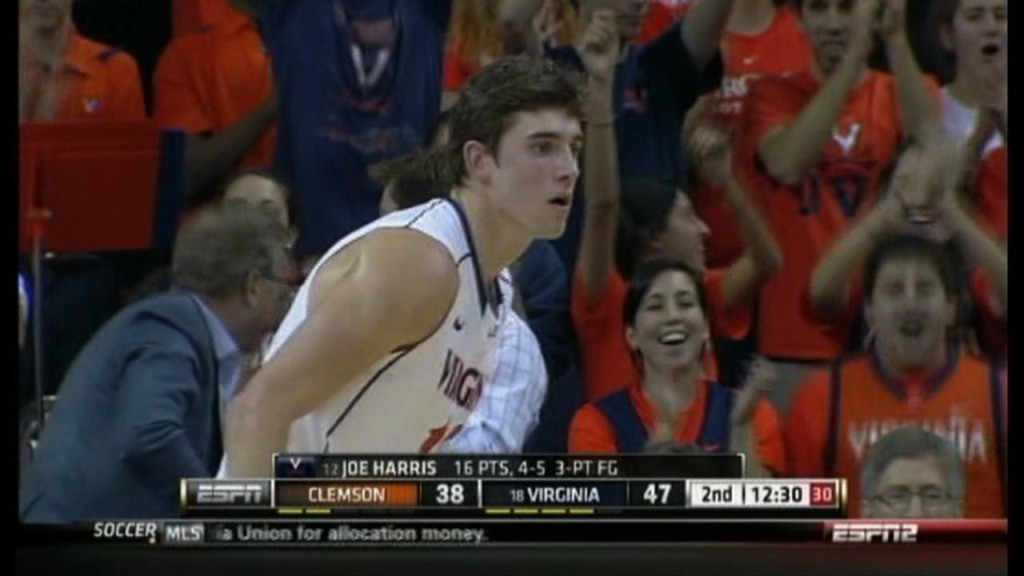 CHARLOTTESVILLE, Va. (AP) — Mike Scott is hard to stop and is always the focus of the opponent’s defense when they play No. 16 Virginia. Add a teammate also shooting well, and Scott becomes nearly unstoppable. Scott scored 23 points, including four free throws over the final 16.8 seconds, and Joe Harris had a season-high 19 Tuesday night as the Cavaliers rallied and then hung on to beat Clemson 65-61. Scott, who hit 8 of 11 shots and scored on an array of inside moves and jump shots from as far away as the 3-point line, said when a teammate is also making outside shots, his chances come easily. “It’s pretty easy because now teams are worried about Joe now and they’re forgetting about me, or they’re worried about me and forgetting about Joe,” said Scott, who had 10 rebounds. “Either way, either one of us, we’re going to get production.” Harris, who was 5 for 6 on 3-pointers, said he felt good from the beginning. “I just felt myself getting room and rhythm looks and I was getting my eyes on the basket, and when I got the chance, had the opportunity to get a clean look, I was letting it go,” he said. It all happens because of Scott, he said. “Mike, he just kind of opens up everything for everybody because most teams are so focused on stopping him, and they’re bringing two guys and all the other defenders, their eyes are on the ball when Mike has it,” Harris said. “And he does a great job of finding the open guys.” The Cavaliers (18-3, 5-2 Atlantic Coast Conference) seemed to have taken command with a 19-3 second-half run that featured three 3s by Harris, but the Tigers rallied from an 11-point deficit to get within a possession twice in the final minute, but could never get even. Virginia reached 18 victories before the end of January for the first time since 1981-82. Devin Booker scored 16 points and Tanner Smith had 14 for the Tigers (11-10, 3-4), who were without starting forward Milton Jennings after he was suspended for academic reasons on Monday. The Tigers were within 61-58 and had the ball when they called a timeout with 20.6 seconds to play. Smith, who was 4 for 5 on 3-pointers, inbounded to Andre Young, who quickly launched a 3-pointer that missed. Scott rebounded, was fouled and made both ends of a 1-and-1. “What he’s doing for their team is tremendous,” Clemson coach Brad Brownell said of Scott, calling him one of the two or three best players in the league. “He gives them a guy to go to late in the clock or when you really need a basket. He made his free throws down the stretch. He made some 17-foot jump shots that I know he can make, but you’re guarding so many things that there’s something you’ve got to give them,” Brownell said. The Tigers led 35-30 early in the second half before Harris and Sammy Zeglinski hit consecutive 3-pointers to put Virginia ahead. The shots were the start of an 11-0 run before Booker hit a 3-pointer for the Tigers. The Cavaliers then added eight straight points to open a 49-38 lead. The Cavaliers made 8 of their first 9 shots in the second half, including three 3s by Harris and one by Zeglinski. Virginia shot 56 percent against the league’s second-stingiest defense, which arrived allowing just 59.7 points per game. Still, it came down to the final minute. Trailing 57-49 with 5 minutes left, the Tigers got seven points from Booker in a 9-4 run to get within 61-58 with 58.9 seconds to play. After misses at both end, Scott was fouled and made both. Early on, the Tigers hardly missed Jennings and his 8.9 scoring average. Seven-foot-2 Catalin Baciu scored six points in the first half, exceeding his 4.2 average, and K.J. McDaniels had four, above his average of 3.1 But neither scored in the second half. The first half was tight throughout with the lead changing hands 15 times and neither team leading by more than four. The first 8:28 was up-and-down offense, with Virginia hitting 7 of its first 9 shots, and Clemson 6 of 9.