Clemson Loses at Home to Maryland 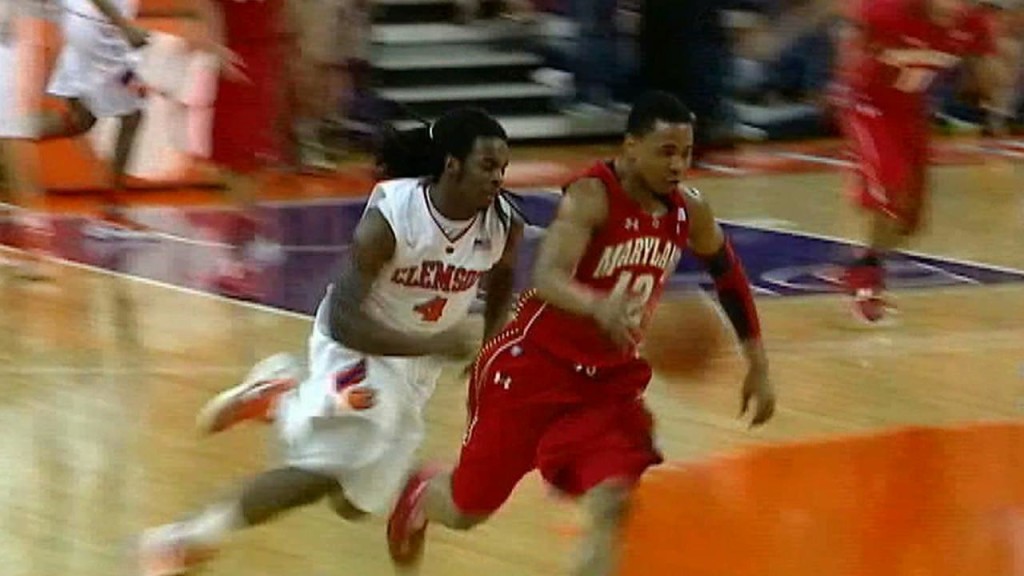 CLEMSON, S.C. (Associated Press) — Terrell Stoglin scored 27 points and helped Maryland hold off a late Clemson rally in a 64-62 victory on Tuesday night. The Terrapins (14-9, 4-5 Atlantic Coast Conference) looked like they were in control, ahead 53-39 with 7:55 to go. That’s when the Tigers (11-12, 3-6) went on a 19-6 run to cut the lead to a point on Devin Booker’s two foul shots. But Alex Len made a bucket and Stoglin followed with two foul shots to put Maryland out front 63-59. Clemson was down 64-62 with 1.7 seconds left, but Andre Young’s desperation halfcourt heave bounced off the rim and the Terps broke their two-game losing streak with their first ACC road win this season. Young led the Tigers with 15 points and made four 3-pointers. Stoglin, the ACC’s leading scorer, ended 9 of 11 shooting with four 3-pointers. It was the eighth time in nine league games Stoglin’s scored 20 or more points. Sean Mosley added 16 points. Young had the opportunity to tie the game with Clemson trailing 61-58, but made only 1 of 3 free throws after getting fouled behind the arc. The Tigers were still in it when Milton Jennings hit his third 3-pointer of the second half with 2.8 seconds to go to make it 63-62. Mosley, though, made a foul shot and Young’s long-range attempt was off the mark. Booker and Jennings had 14 points apiece. Clemson trailed Virginia Tech by 14 points in the final four minutes before rallying in a 67-65 loss this past Saturday. The Tigers have lost three in a row. Maryland and Clemson were each looking to move up in the ACC after going 3-5 halfway through the league season. The Tigers expected a boost when Jennings, the 6-foot-9 starting forward, returned after missing the past two defeats because of academic suspension. Little, though, — not even coach Brad Brownell bobblehead night — seemed to help Clemson’s shooting touch in the first half of this one. The Tigers were a dreadful 6 of 23 shooting at one point and needed to make four of their final eight shots simply to get above 30 percent. Clemson missed all seven of its 3-point attempts and Young, their leading scorer, was 1 of 5 for 2 points in the first 20 minutes. Plus, Clemson had no answer for Stoglin, the ACC’s leading scorer at 21.7 points a game. Maryland’s sophomore guard freely drove the lane for baskets and showed his range with an on-target floater for a 3 as the shot clock was winding down. That 3-pointer with 4:58 left in the half broke an 18-all tie. Stoglin followed with a midcourt steal and breakaway layup. Mosley added a 3-pointer and the Terps took a 26-22 lead into the break. Clemson struggled to score in every way. The team was just 2 of 6 on free throws, including twice missing attempts to complete three-point plays.