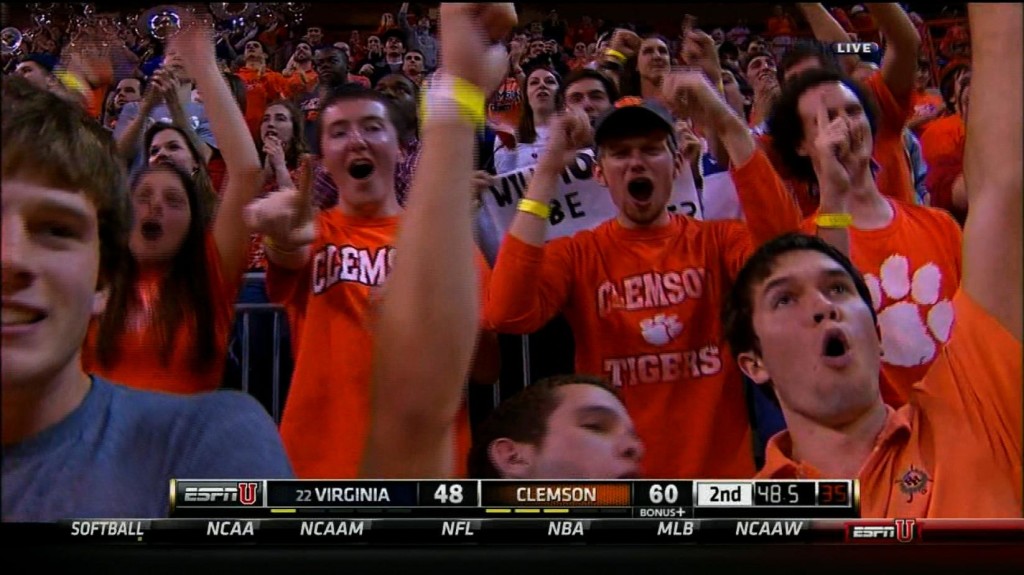 CLEMSON, S.C. (AP) — Andre Young and Tanner Smith scored 13 points each and Clemson held No. 22 Virginia to its second-lowest point total this season in a 60-48 victory on Tuesday night. The Tigers (13-12, 5-6 Atlantic Coast Conference) took control with an 18-9 run over the final eight minutes to give the Cavaliers (19-6, 6-5) their second straight loss. Virginia looked out of synch with outside threat Joe Harris playing in a cast after breaking his left hand in a loss to North Carolina last Saturday. Harris came in averaging 12 points a game, but was limited to two points on 1-of-5 shooting. Jontel Evans led the Cavaliers with 17 points and star Mike Scott finished with 13, four below his team-leading average. Devin Booker added 10 points for the Tigers. Booker was a big reason for Clemson’s second-half dominance. He was 0-for-1 with no rebounds in the opening period, scoring all 10 of his points and four rebounds after the break. He also added two blocks and two steals. The Cavaliers looked poised for a second-half charge after Evans had a three-point play and inside bucket to cut the lead to 44-41 with 7:56 remaining. That’s when Clemson got going on its charge. Smith hit a basket to start the run, while Booker had two baskets sandwiched between a shot by freshman Rod Hall. When Smith made two foul shots with 1:55 left, the Tigers were ahead 54-43 and celebrating. Virginia came in missing a big part of its attack when sophomore Harris just couldn’t get comfortable playing with his injury and did not start. When Harris did come off the bench, it was clear he was favoring the wrapped-up hand. He missed his only shot and committed two turnovers in 11 minutes of first-half action. Harris came in averaging 12.5 points and was crucial in the Cavaliers’ 65-61 win over Clemson back on Jan. 31 with 19 points off five 3-pointers. Having Harris at half speed seemed to affect his teammates, too. Clemson forced 10 turnovers in the first 20 minutes, nearly what Virginia gives up in a game with its 11.5 average. The Cavaliers finished with 18 turnovers, while Clemson picked up 14 steals. Harris’ replacement in the starting lineup, Malcolm Brogdon, picked up some of Virginia’s missing touch from the outside with seven points on 3-of-4 shooting. Young kept the Tigers in it throughout the period. He scored the first five points and added a second 3-pointer that put Clemson out front, 14-13. The Tigers eventually led 21-17 before Scott’s smooth jumper and Brogdon’s 3-pointer gave Virginia the lead. Young had the chance to send Clemson into the break ahead, but he made just one of three free throws after getting fouled behind the arc. Young had a similar situation in the Tigers previous game at Littlejohn Coliseum, having three foul shots with 10 seconds left that would’ve tied things against Maryland. Then, too, Young made just one and Clemson lost 64-62. Clemson offered discounted two-for ticket packages that drew a sellout crowd to Littlejohn. Then at halftime, one of the school’s Rally Cat dancers, Nicole, said ‘Yes’ to a marriage proposal from her boyfriend, Tad, to the cheers of all attending. Copyright by STATS LLC and The Associated Press