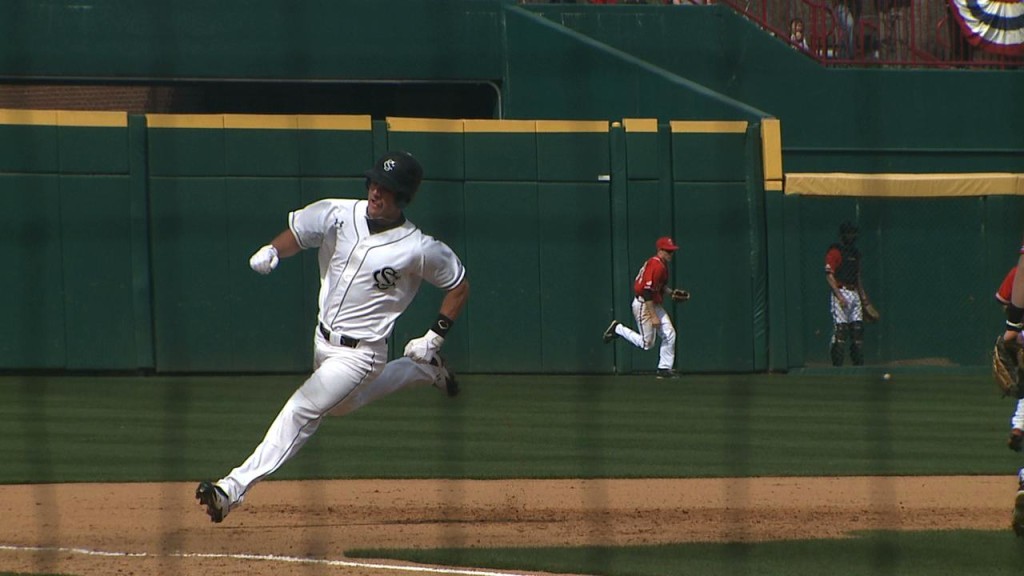 OLUMBIA, S.C. (USC Athletics) – South Carolina’s bats exploded for 16 hits in game two of Saturday’s doubleheader and six pitchers combined for 12 strikeouts as the Gamecocks defeated VMI 13-1 to sweep the doubleheader and the three-game series vs. the Keydets. LB Dantzler tallied a three-run homer and TJ Costen added a two-run shot as five players tallied multi-hit games in the series finale. South Carolina is now 3-0 on the year with VMI 0-3 after the first weekend of play. After a tight 3-2 win in game one of the doubleheader, South Carolina’s offensive output was plenty for the Gamecocks in game two. Junior right-hander Colby Holmes earned the win with five scoreless innings of work. He allowed just one hit and struck out six batters. VMI starter Jeremy Brown suffered the loss after allowing one run on four hits in three innings of work. South Carolina broke ahead 1-0 in the bottom of the first inning. With one out and Tanner English on first base, Christian Walker drilled a single into the gap in right-center to give the Gamecocks runners on the corners. English would eventually score on LB Dantzler’s RBI sacrifice fly to the warning track in left field. Carolina batted around in the fourth inning to extend the lead to 8-0. Freshman catcher Grayson Greiner led off with a double and scored on freshman first baseman Kyle Martin’s RBI base hit. After loading the bases, Martin scored on a bases loaded walk to freshman second baseman Connor Bright. With two outs and runners on second and third base, Walker drilled a two-run single to plate home Bright and Tanner English. Dantzler followed with a three-run bomb to right field, his first homer of the year that gave the Gamecocks an eight-run cushion. Dantzler finished the afternoon with four RBI as well as five for the entire series. South Carolina added three more runs in the seventh inning as well as two more in the eighth inning. Evan Marzilli would connect with a two-run triple with English driving him home with a sacrifice fly. TJ Costen stepped up in the eighth and drilled a two-run homer as well. Kyle Martin’s 3-for-5 day at the plate with two runs scored led the Gamecocks. Marzilli, Walker, Greiner and Adam Matthews all had two hits as well. South Carolina hitters looked good at the plate with a .347 average (35-for-101) for the series. Marzilli was solid in the leadoff role the entire weekend batting .500 (6-for-12) with a pair of RBI and three runs scored. The Gamecock pitching staff picked up where it left off last season with a strong effort the entire first weekend on the mound. South Carolina had 11 pitchers that saw action. They combined for 36 strikeouts and just four walks allowed in 27 innings pitched along with a 1.33 ERA. The VMI hitters hitting just .121 for the weekend with only one extra base hit and 11 total hits. South Carolina returns to action next Friday as the Gamecocks begin a three-game series with Elon. First pitch for the opener at Carolina Stadium on Friday is set for 3 p.m. with Saturday and Sunday’s contests at 1:30 p.m. All three games can be heard on the Gamecock IMG Network with live video broadcast available at GamecocksOnline.com