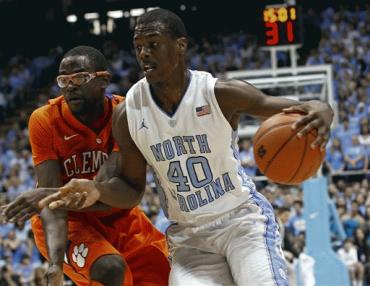 CHAPEL HILL, N.C. (AP) — With Harrison Barnes’ scoring to go with North Carolina’s defense and rebounding, the Tar Heels (No. 7 ESPN/USA Today, No. 8 AP) extended Clemson’s long run of misery here. Barnes scored 24 points in the Tar Heels’ 74-52 win Saturday, which improved UNC to 56-0 all-time in Chapel Hill against the Tigers. Tyler Zeller added 14 points for the Tar Heels (23-4, 10-2 Atlantic Coast Conference), who held Clemson to 38 percent shooting and outrebounded the Tigers 39-26. The Tar Heels have won three straight since their last-second loss to rival Duke, holding each opponent to 64 or fewer points. “Everybody thinks that defense is just sweat and slobbering and yelling at guys and stuff, but you’ve got to know what you’re doing,” UNC coach Roy Williams said. “I think our guys are more in tune with our defensive principles right now.” Defense and rebounding offered the biggest positives on a day when the Tar Heels didn’t look particularly sharp. Then again, they weren’t in any serious danger of fumbling away that long winning streak — an NCAA record for the most consecutive home wins over one opponent — against the Tigers (13-13, 5-7). With the win, the Tar Heels kept pace with Florida State (No. 21 ESPN/USA Today, No. 20 AP) in a tie atop the league standings. The Seminoles won 76-62 at North Carolina State earlier Saturday, while Duke (No. 4 ESPN/USA Today, No. 5 AP) can make it a three-way tie again by winning Sunday at Boston College. The Tar Heels won all three meetings with the Tigers last season, including in the ACC tournament semifinals when they rallied from 14 down and won in overtime. Barnes hit the go-ahead shots in the final 5 minutes of regulation or overtime in all three of those games, and finished with a freshman tournament-record 40 points in the semifinal victory in Greensboro. He went 9-for-18 from the field and hit three 3-pointers in 31 minutes Saturday. “I think we’re getting better spacing,” Barnes said. “When we space out the court, it allows people to be able to work and operate. My teammates, John (Henson) is doing a better job of either posting up and demanding for the ball or clearing out and setting a screen. I’m able to capitalize off that and make things happen.” Henson (13 points) had eight rebounds to lead the effort on the boards, while Zeller and Barnes each added seven, and Reggie Bullock had six. The Tar Heels also finished with a 16-9 edge in second-chance points. “Coach always talks about if you’re one of the guards, get to the boards,” said Bullock, who had 11 points. “With me and Harrison on the wings, we apply a lot of height. It should be easy for us to get boards.” North Carolina led by 15 points in the first half and never let Clemson closer than six in the second before blowing it open late. The Tar Heels also shot 49 percent for the game and 59 percent after halftime, though Williams also looked flustered several times by his team’s cruise-control demeanor in the second half. In fact, Clemson pulled to 47-41 when Tanner Smith knocked down a 3-pointer then followed with a layup in transition at the 12-minute mark. But the Tigers came up empty on four straight possessions with a chance to cut into the lead even more — three of those were turnovers — before Henson scored inside to end that opportunity. “You’ve got to get North Carolina to a point where they can get a little nervous,” Clemson coach Brad Brownell said. “You’ve got to get it to five minutes or six minutes in the game and it’s a couple of possessions, and then you’ve got a chance. But we couldn’t get it.” Instead, UNC’s lead grew. By the time Barnes hit a 3-pointer to beat the shot clock with 90 seconds left, UNC led 72-50. And there were soon the familiar chants of “You can’t win here!” coming from the Smith Center stands. Williams had waved off fans from continuing that cheer in past years. This time it was Kendall Marshall, who had already checked out of the game for the afternoon with 13 assists and the victory in hand. “I don’t think it has much to do with extra pressure or anything like that,” Smith said of the Tigers’ 0-56 streak. “We just didn’t make the plays down the stretch that we needed to make.” Andre Young scored 13 points to lead Clemson.