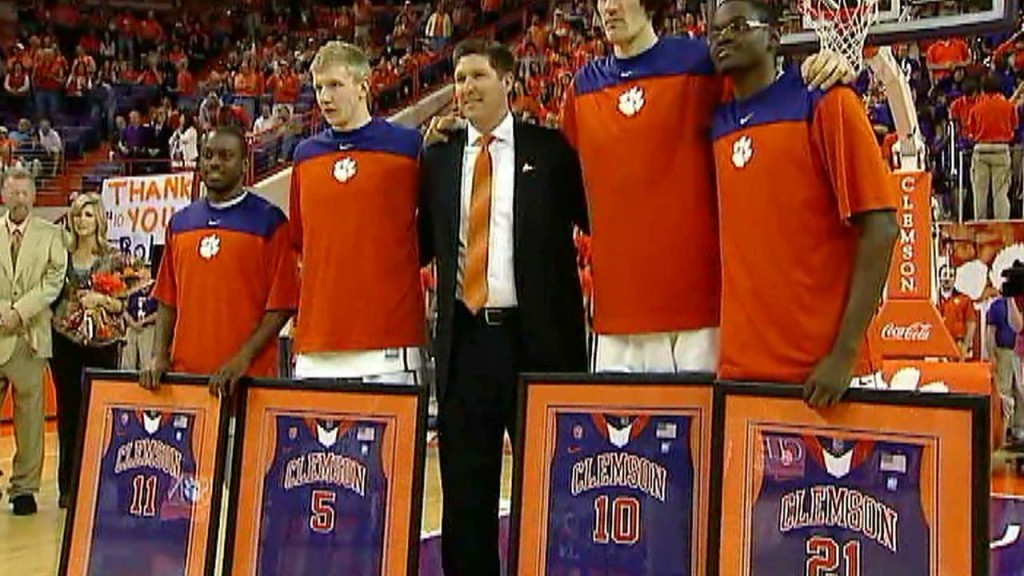 CLEMSON, S.C. (AP) — Tanner Smith had 14 points including the game-winning foul shots in his final game at Littlejohn Coliseum and Clemson held on to beat Virginia Tech 58-56 on Thursday night. The Tigers (16-13, 8-7 Atlantic Coast Conference) saw their eight-point lead slip away as the Hokies tied the game at 56-all on Robert Brown’s two free throws with 2:55 to go. Ten seconds later, it was Smith at the line to sink the go ahead field goals. Neither team scored after that. Virginia Tech (15-15, 4-11) had the chance to tie it with 2.2 seconds, but Cadarian Raines missed his first foul shot and then intentionally missed his second attempt. The ball wound up in Smith’s hands and Clemson won for the fifth time in six games. Jarrell Eddie led the Hokies with 15 points. Smith added six rebounds and two steals. Devin Booker scored 11 points. Milton Jennings had six points and 12 rebounds. The Tigers finished 0-of-10 from three-point range, the first time they won an ACC game without a long-distance basket since beating Virginia 74-63 on Feb. 10, 1990. Tech’s top scorer coming in, Erick Green, had a poor shooting night, going 3 of 11 for 8 points, just a little more than half his average. Clemson and Virginia Tech came in headed in opposite directions. The Tigers had won four of their last five and were looking to guarantee a .500 season in the ACC with its eighth league victory and stay in the hunt for the fourth and final bye at next week’s conference tournament. The Hokies, 4-11 since New Year’s Day, were looking to bounce back from a couple of disappointing near misses, falling to rival Virginia 61-59 and, in overtime, at Duke 70-65. None of it seemed to bother Virginia Tech much, which hit three 3-pointers and ran out to a 16-6 lead. The Hokies were still ahead 24-17 on Eddie’s jumper with 10:05 remaining in the half when the team went ice cold over the next seven minutes. After hitting nine of their first 14 shots, the Hokies missed their next seven shots and committed three of their six turnovers in the period. The result was a 12-2 Clemson run that put the Tigers out front. Jennings spun in a layup and was fouled with 6:10 to go in the half, converting the three-point play for Clemson’s first lead, 25-24. Freshman Devin Coleman sent the Tigers into the break out front, 33-31, on a driving jam with six seconds left. Clemson honored its four seniors in Smith, Andre Young, Bryan Narcisse and Catalin Baciu in what could be their final home game. The Tigers late-season drive is likely too late to extend their streak of five straight NCAA tournament appearances. But Clemson could certainly hold an NIT home game at Littlejohn Coliseum if it continued winning. It was an odd start to the game, too. Smith, Clemson’s mild-manner forward, was called for a technical after what officials considered taunting following his breakaway jam. The foul brought a steady, loud string of boos and catcalls from the crowd that lasted several possessions. Smith has been honored for his charitable works with “Tanner’s Totes,” an organization that provides gift bags to children and teenagers undergoing long-term hospital stays. Virginia Tech’s Green spent a few moments on the bench when he got clipped in the face by Young, swatting a ball. Green was off target the rest of the half, going 1 of 4 for 2 points. Green heated up for a stretch with two 3-pointers in the second half that cut Clemson’s lead from eight points to 51-50. Copyright by STATS LLC and The Associated Press