Long Ball Gets Gamecocks Past Clemson 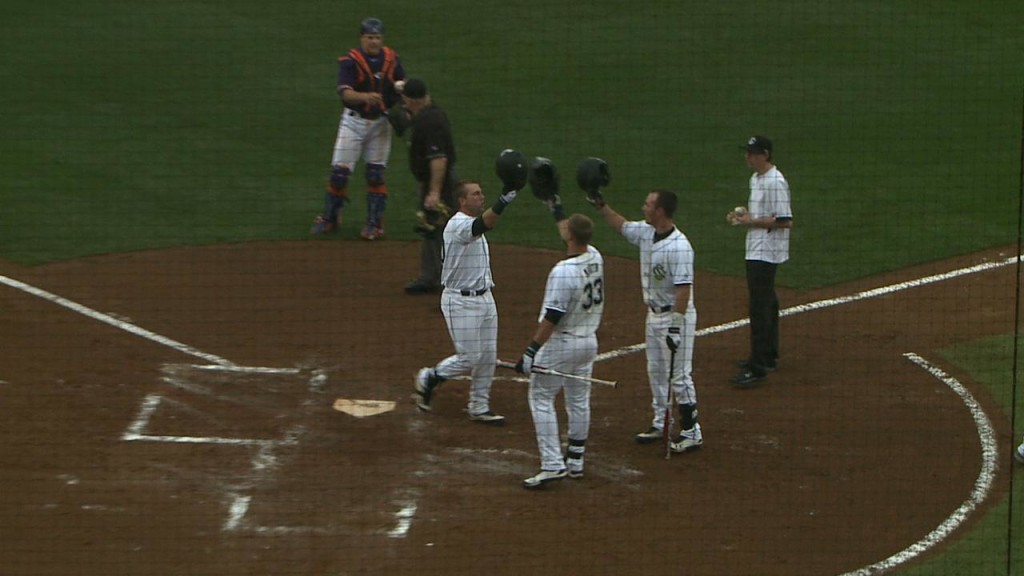 Columbia, S.C. (USC Athletics) – Second ranked South Carolina pounded out 11 hits with a three-run homer from Adam Matthews as well as a solo homer from LB Dantzler, on the way to a 9-6 victory over 15th ranked Clemson on Saturday afternoon in front of a sold out crowd of 8,242 fans at Carolina Stadium. The Gamecocks improve to 9-0 while Clemson drops to 4-4 for the season. The victory gives Carolina a series victory over the Tigers. South Carolina has defeated Clemson in 16 of the last 22 contests between the two schools dating back to the 2007 season. The series finale is scheduled for 2 p.m. on Sunday afternoon at Doug Kingsmore Stadium. The game will be broadcast live on ESPN3 and can also be heard on the Gamecock Radio Network from IMG College including flagship station 107.5 FM. Freshman right-hander Evan Beal earned the win in relief and is now 1-0 on the year. He retired nine in a row when he entered the game in the bottom of the 5th and finished allowing two runs on three hits with five strikeouts and a walk in four innings of work. Clemson junior right-hander Dominic Leone suffered the loss and is now 2-1 for the season. Leone went 2.1 innings and allowed six runs on four hits with three walks, two hit batters and a pair of strikeouts. Clemson struck first with two runs in the top of the second inning. Phil Pohl led off with a walk and Brad Felder doubled down the right field line to put runners on second and third base. South Carolina starter Matt Price battled and got the next two outs with a strikeout against Garrett Boulware and a pop up to Dominic Attanasio. Jason Stolz however responded for the Tigers with a two-out RBI single up the middle to give the Tigers a 2-0 lead. The Gamecocks had their own answer in the bottom half of the second against Leone with three runs to go ahead 3-2. Dantzler got things started with a solo home run to right field to lead off the frame, his team-leading third homer of the year. That was followed by a base hit from Kyle Martin and a walk to Joey Pankake. After Matthews‘ sacrifice bunt advanced the runners, Dante Rosenberg drove in Martin with a RBI ground out to the second baseman. With Pankake on third base and two outs, South Carolina took advantage of Leone being around the zone as Chase Vergason was hit by a pitch and Evan Marzilli walked to load the bases. Pankake would then score as Leone hit Tanner English giving the Gamecocks a one-run lead. That lead extended to 6-2 in the third inning on the back of Matthews‘ three-run homer. A one-out walk to Martin followed by an infield single from Pankake set the stage for Matthews. On Leone‘s 1-0 pitch, Matthews drilled a fastball to deep center field that cleared the wall to increase Carolina‘s lead to four runs. It was Matthews‘ first homer of the season and ended the afternoon for Leone. Clemson cut Carolina‘s lead to 6-4 in the top of the fifth inning. With one out and Steve Wilkerson on first base, Richie Shaffer roped a double down the left field line that scored Wilkerson. Shaffer would eventually be driven in by Phil Pohl cutting the Gamecock deficit in half. Price left after 4.1 innings allowing four runs on five hits with six strikeouts and two walks in a no-decision. South Carolina answered again in the bottom half with an unearned run off of Clemson reliever Jonathan Meyer to increase the lead back to three runs. Matthews reached base with one out on an infield single and advanced to third on Dante Rosenberg‘s single down the right field line. With two outs, Evan Marzilli hit a chopper up the middle that Clemson second baseman Steve Wilkerson could not handle allowing Matthews to score and increasing the Carolina lead to 7-4. The Gamecock lead stretched to 9-4 in the eighth inning. Tanner English led off with a bunt for a base hit and after a stolen base scored on Christian Walker‘s RBI double down the left field line. Walker eventually would score on Pankake‘s fielder‘s choice RBI. Clemson responded in the ninth inning as Richie Shaffer knocked a two-run homer with two outs to left field off of Beal cutting the Carolina lead to three runs. After a base hit by Phil Pohl, the Gamecocks went to the pen one more time with left-hander Nolan Belcher, who retired Brad Felder on a ground out clinching the Carolina victory. Belcher picked up a save for the second straight day. Seven of nine Gamecock starters had at least one hit. Matthews, Dantzler and Martin had two hits apiece. Martin, Pankake and Matthews all scored two runs as well. Shaffer led Clemson with a 2-for-5 day at the plate with three RBI.