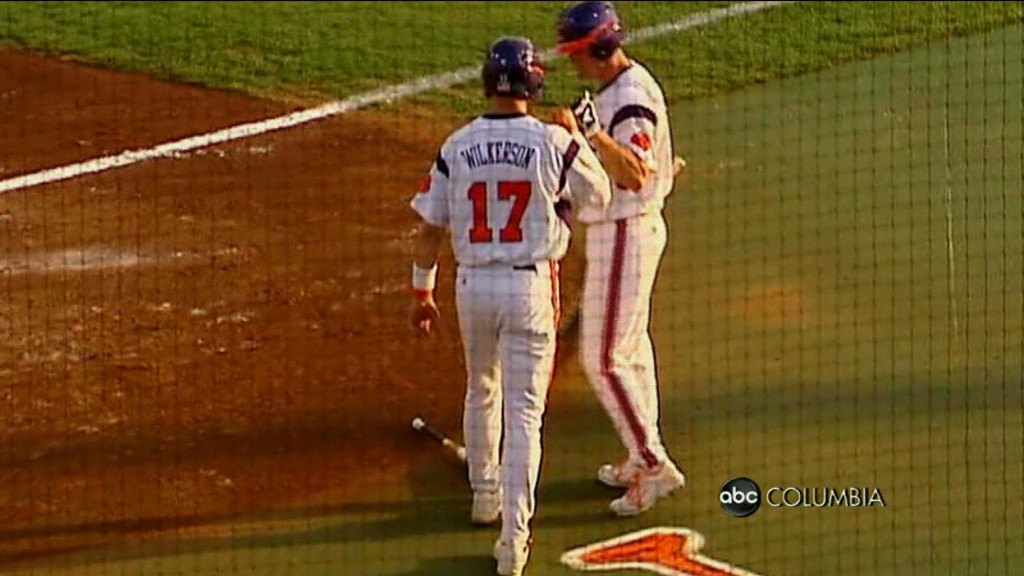 Clemson, S.C. (CU SID) — Steve Wilkerson went 4-for-4 at the plate and three Tiger pitchers combined to allow only two runs and one walk with 11 strikeouts in Clemson’s 6-2 win over Elon at Doug Kingsmore Stadium on Tuesday night. The Tigers, who took a 1-0 lead in the two-game series, improved to 10-8 on the season. The Phoenix dropped to 12-9. Wilkerson led off the game with a walk and scored the first of three Clemson runs in the first inning. The Phoenix never pulled closer than two runs the rest of the way, as Jonathan Meyer, Patrick Andrews, and Mike Kent combined to allow only two of Elon’s 12 baserunners to score in the game. Meyer (1-1) pitched 5.0 effective innings to earn the win in a starting role. He gave up seven hits, one run, and no walks with five strikeouts. Kent pitched the final 2.0 innings with three strikeouts while not allowing a hit, run, or walk. Grant McCoury (0-1), the first of three Elon hurlers, suffered the loss. He surrendered one hit, three runs, and three walks in 0.2 innings pitched. Elon pitchers combined to strand 12 Tigers on base, including seven in scoring position. In the first inning, Wilkerson, Jason Stolz, and Richie Shaffer led off with walks to load the bases with no outs, then Phil Pohl lined a single to center to score Wilkerson. Brad Felder reached on a fielder’s choice to first as Stolz scored and Pohl was retired at second base. Spencer Kieboom then lined a sacrifice fly to right-center to score Shaffer, giving Clemson a 3-0 lead. The Phoenix responded with a run in the third inning. Casey Jones led off with a single up the middle on a 1-2 pitch and advanced to second on Chris Bresnahan’s groundout to first. Eric Serra followed with a sharp single through the right side to move Jones to third, then Jake Luce struck out. But Sebastian Gomez came through with a two-out single to center to plate Jones. In the fourth inning, Tyler Slaton led off with a single up the middle, stole second, and scored on Wilkerson’s single through the right side. Elon was poised to cut into Clemson’s lead in the fifth inning, but a spectacular defensive play saved up to two runs. Bresnahan led off with a single to right-center on a 1-2 pitch. Two batters later, Luce hit a one-out single through the right side. Two batters later with two outs, Alex Swim belted a deep drive to right field, but Felder made a diving catch near the fence to end the inning and keep the Tigers ahead 4-1. The Phoenix broke through with a run in the sixth inning. Ryan Kinsella led off with a four-pitch walk, then Garrett Koster blooped a single to right-center. After both runners moved up a base on a wild pitch and Niko Fraser struck out, Jones reached on an infield single that allowed Kinsella to score. Clemson doubled its lead with two runs in the seventh inning. Jay Baum lined a one-out single to center and advanced to second on Garrett Boulware’s groundout to short. Slaton then flared a two-out single to right-center to score Baum, while Slaton moved to second on the throw home. Wilkerson followed with a line-drive single to right-center to score Slaton. Wilkerson had his second four-hit game of the season to lead Clemson’s nine-hit attack. He reached base in all five plate appearances and added two RBIs along with one run. Slaton went 2-for-4 with an RBI and two runs, while Shaffer added three of Clemson’s seven walks. Eight different Elon players had at least one hit to lead the Phoenix’s 10-hit performance. Koster and Jones totaled two hits apiece, while Swim extended his hitting streak to 14 games. Clemson and Elon will conclude their two-game, midweek series at Fluor Field in Greenville, SC on Wednesday at 5:00 PM. The Tigers will be the designated home team and occupy the first-base dugout.