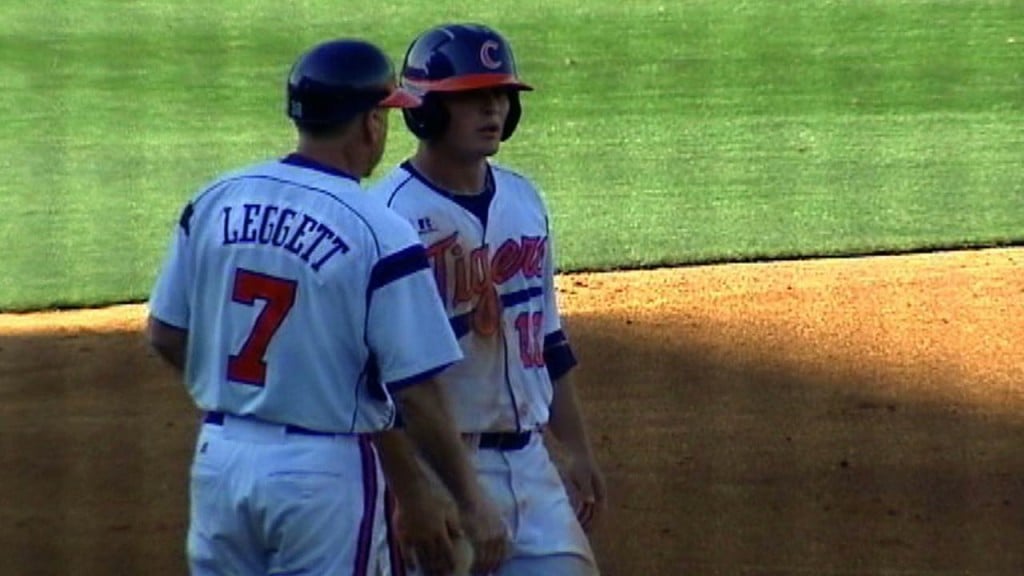 Greenville, S.C. (CU SID) — Mike Dunster’s three hits and three RBIs in his first start of the season and freshman righthander Daniel Gossett’s 10 strikeouts propelled Clemson to a 4-2 win over Elon in front of 2,319 fans at Fluor Field on Wednesday. The Tigers, who won both games of the two-game series, won their fifth game in a row and improved to 11-8 in 2012. The Phoenix fell to 12-10 on the season. Jack Leggett reached the 1,200 career win mark with Wednesday’s victory in his 33rd season as a head coach. He became the 15th coach in history to amass 1,200 wins as a Division I head coach. Gossett (1-2), a native of nearby Lyman, SC, picked up his first win as a Tiger in his second career start. His 7.0 innings pitched and 10 strikeouts were the most by a Tiger in 2012. He also allowed just three hits, including none after the first inning, two runs, and two walks. The James F. Byrnes High School graduate also retired the last 13 batters he faced and 19 of the last 20. Matt Campbell pitched a perfect ninth inning with a strikeout to record his second save of the year. Clemson’s four pitchers did not allow a leadoff batter of an inning to reach base. Elon reliever David Whitehead (0-2) suffered the loss, as he yielded four hits, two runs, and four walks with one strikeout in 2.2 innings pitched. The Phoenix struck first in the first inning after the first two batters of the frame were retired. Alex Swim lined a two-out single to right field to extend his hitting streak to 15 games and Ryan Kinsella singled through the right side. After Garrett Koster loaded the bases with a walk, Niko Fraser singled up the middle to score Swim and Kinsella. In the third inning, Tyler Slaton led off with an infield single and moved to second on Steve Wilkerson’s groundout to first. After Slaton advanced to third on a wild pitch, he scored on another wild pitch. Phil Pohl led off the fourth inning with a single through the left side, but was erased on Brad Felder’s fielder’s choice. Spencer Kieboom grounded another single through the left side to advance Felder to third, then Dunster belted a single through the right side to score Felder, tying the score 2-2. In the sixth inning, Felder led off with a single up the middle, stole second base, and moved to third on an error by the catcher on the throw to second. After Kieboom walked, Dunster lined a double, the only extra-base hit of the game, down the left-field line to score Felder and advance Kieboom to third. But with runners at second and third and no outs, the Tigers were unable to add to their one-run lead. The Tigers doubled their lead in the seventh inning. Jason Stolz led off with a single up the middle, then the next two Tigers fouled out. After Felder was intentionally walked and Kieboom walked to load the bases, Dunster laced a single up the middle to score Stolz, but Felder was gunned downed by Fraser in center in a close play at the plate to end the inning. Sebastian Gomez grounded a one-out single through the left side in the eighth inning, Elon’s first hit since the first inning, then pinch-hitter Joey Tomko singled up the middle. Both runners moved up a base on Swim’s groundout to first, but Kinsella grounded out to third to end the inning. Dunster, a sophomore from Greenwich, CT, had his first career multi-hit game in his first start of the season and just the second of his career. He went 3-for-4 with a double and a career-high three RBIs. The only time he was retired was on a hard-hit lineout to shortstop. Felder added two runs and a steal for Clemson, who accumulated nine hits and put six of its eight leadoff batters on base in the contest. Fraser had a single and two RBIs to lead Elon, who had just five hits in the game. Clemson will travel to Charlottesville, VA to take on Virginia in a three-game series starting Friday at 6:00 PM.