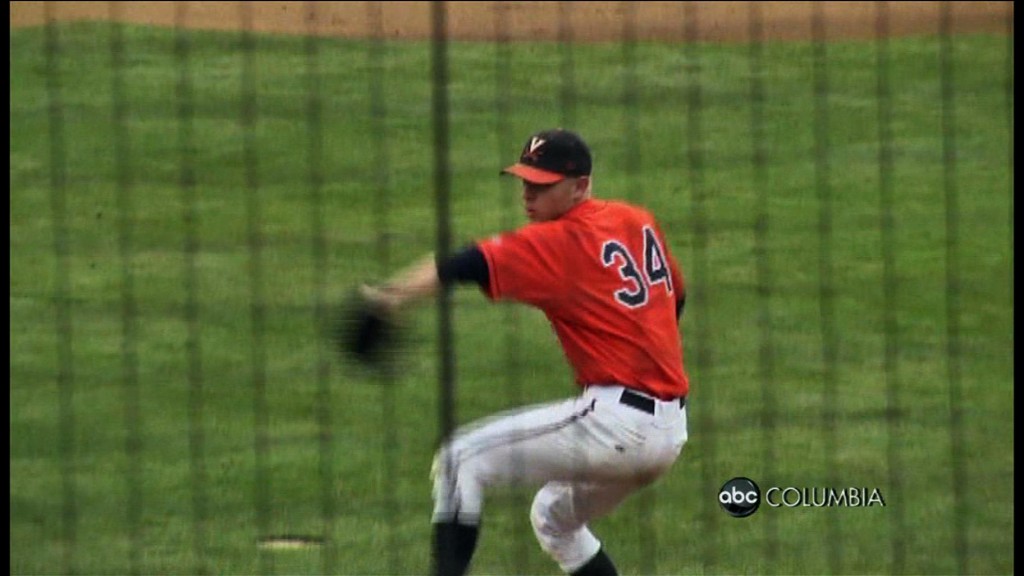 CHARLOTTESVILLE, VA (UVA Athletics) Derek Fisher went 2-for-2 with a double, triple, and three runs to lead Virginia to a 5-3 victory over Clemson in front of 3,129 fans at UVA Baseball Stadium on Sunday afternoon. The Cavaliers, who swept the series 3-0, improved to 15-8-1 overall and 5-4 in the ACC. The Tigers fell to 11-11 overall and 3-6 in ACC play. The Cavaliers jumped out to a 3-0 lead with single runs in the first, second, and fourth innings. Clemson chipped away with single runs in the fifth and sixth innings, highlighted by Phil Pohl‘s solo homer in the sixth. But Virginia never relinquished its lead and held on for a two-run win. Artie Lewicki (1-1), the first of four Cavalier hurlers, earned the win. He allowed six hits, two runs, and two walks with four strikeouts in 6.0 innings pitched. Justin Thompson pitched a scoreless ninth inning to record his fourth save of the year. Tiger starter Kevin Pohle (3-1) suffered the loss. He gave up four hits, three runs, and four walks with one strikeout in 4.0 innings pitched. The Cavaliers wasted little time taking the game‘s first lead in the first inning. Chris Taylor led off with a single to right field and advanced to third on the play when right-fielder Brad Felder misplayed the ball. Colin Harrington followed with a double down the right-field line to score Taylor. Fisher led off the second inning with a triple to right-center and Nate Irving walked. Fisher scored on Mitchell Shifflett‘s fielder‘s choice as Irving was retired at second base. In the fourth inning, Fisher led off with a hit-by-pitch and advanced to second on Irving‘s sacrifice bunt. After Fisher moved to third on Shifflett‘s flyout, Fisher scored on Keith Werman‘s two-out, infield single to give Virginia a 3-0 lead. The Tigers finally dented the scoreboard in the fifth inning. Spencer Kieboom hit a one-out single through the left side, but was erased on Dominic Attanasio‘s fielder‘s choice. Tyler Slaton kept the inning alive with a two-out single through the right side, then Steve Wilkerson lined a single to center to score Attanasio. Pohl cut the Cavaliers‘ lead in half in the top of the sixth inning when he belted a solo home run to left field, his fourth long ball of the season. Felder followed with a one-out double to left-center, but the next two Tigers were retired. The Cavaliers responded in the bottom of the sixth inning to increase their lead. Fisher led off with a double to right-center on a 1-2 pitch and moved to third on Irving‘s sacrifice bunt. Irving was also ruled safe in a close play at first on Pohl‘s error. Two batters later, Werman laid down another bunt near the first-base line that plated Fisher. Werman went towards the first-base dugout to avoid Pohl‘s tag and reached first on the single. For the first time in the series, Clemson put its first two batters of an inning on base in the top of the seventh inning. Attanasio reached on an infield single and pinch-hitter Jay Baum laced a single through the right side. Wilkerson followed with a single to right-center to score Attanasio. Jason Stolz popped up a bunt to the pitcher and pinch-runner Thomas Brittle was doubled off second for a crucial double play, then the next Tiger was retired to keep Virginia ahead by one run. In the bottom of the seventh inning, Stephen Bruno blooped a one-out double down the right-field line and advanced to third on a wild pitch. After Mike Papi walked, Jared King struck out looking for out #2 as Papi stole second. Fisher was intentionally walked to load the bases, then Irving walked after fouling off several two-strike pitches to score Bruno, giving Virginia a 5-3 lead. Kieboom led off the ninth inning with a single up the middle, then Attanasio struck out looking. Joe Costigan then grounded into a 1-6-3 double play to end the game. Fisher, Werman, and Harrington had two hits apiece to lead Virginia. Werman added two RBIs as well. Wilkerson went 3-for-4 with two RBIs for the Tigers, who outhit Virginia 10-8. Wilkerson also upped his hitting streak to 10 games. Clemson will travel to Athens, GA to take on Georgia on Tuesday at 7:00 PM. The game will be televised live by CSS.