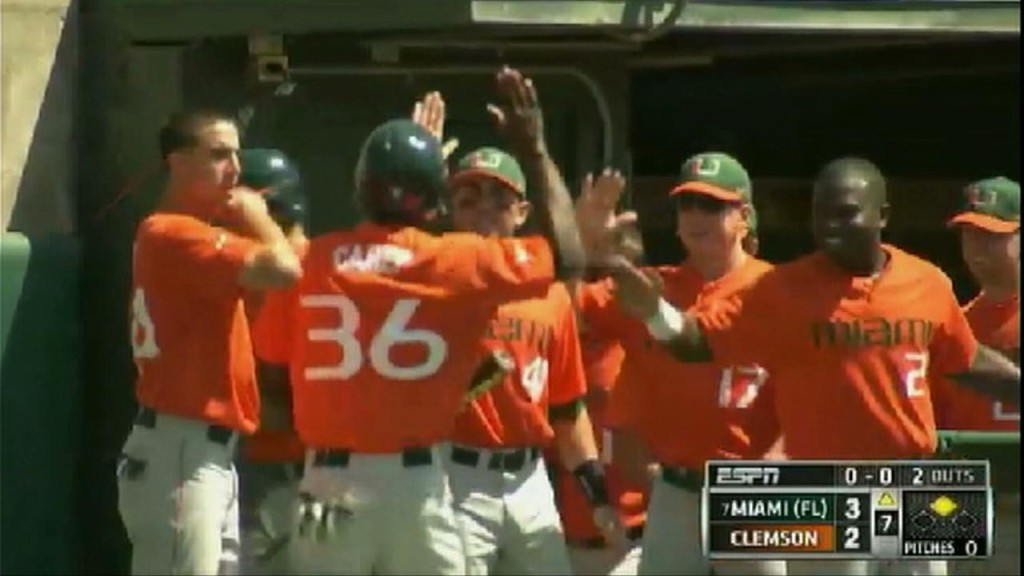 CLEMSON, SC (Clemson Athletics) – Dale Carey’s two-out, two-run single in the seventh inning gave #7 Miami (FL) a one-run lead and the Hurricanes worked out of several late-inning jams to defeat Clemson 4-2 on Sunday afternoon. The Hurricanes improved to 21-7 overall and 8-4 in the ACC. The Tigers, who won the series 2-1, dropped to 14-13 overall and 5-7 in ACC play. AJ Salcines (3-0), the third of five Miami hurlers, earned the win. He retired all four batters he faced and had one strikeout. Eric Nedeljkovic recorded his second save of the year by pitching 2.0 scoreless innings of one-hit ball. He was aided by two double plays turned by the Hurricane defense in the final two innings. The five Miami pitchers combined to allow only two of Clemson’s 13 baserunners to score. Clemson reliever Mike Kent (0-1) gave up hits to both batters he faced in the seventh innings and suffered the loss. Starter Kevin Pohle pitched 6.0 strong innings, allowing six hits, one run, and one walk with three strikeouts. Scott Firth pitched the final 2.1 innings without allowing a run as well. For the third game in a row, Clemson took the game’s first lead. Steve Wilkerson led off the first inning with a bunt single to extend his hitting streak to 15 games and moved to second two batters later on Richie Shaffer’s groundout to second. Phil Pohl then flared a two-out single to center to score Wilkerson. The Hurricanes tied the score in the fourth inning. On a controversial play, Brad Fieger laced a two-out liner to center. Centerfielder Thomas Brittle came up with the ball, but the umpire ruled that he trapped it. Rony Rodriguez followed with a double to right field to plate Fieger. It was the first extra-base hit of the series for Miami. After the Hurricanes had runners at first and second with no outs and failed to score in the top of the sixth inning, the Tigers regained the lead in the bottom of the sixth. Jay Baum led off with a single through the right side, Clemson’s first hit since the first inning. After Baum moved to second on a passed ball, he advanced to third on Shaffer’s single to right-center. Pohl followed with a hard-hit single up the middle to score Baum. After Shaffer was picked off third base and Pohl was caught stealing, the Tigers loaded the bases, but they were unable to add to their lead. The Tigers went 4-for-5 with two walks in the frame, but only managed to score one run. The Hurricanes took advantage of Clemson’s inability to extend its lead with three runs in the seventh inning. Chantz Mack led off with a single through the right side and Michael Broad followed with a single to center. After Esteban Tresgallo struck out, pinch-hitter Julian Santos grounded out to move the runners up a base. Carey came through with a two-out single up the middle to score Mack and Broad. Stephen Perez doubled Miami’s lead when he belted a triple to right field to score Carey. The Hurricanes were 1-for-18 with runners in scoring position in the series before Carey’s and Perez’s clutch hits. Shaffer led off the eighth inning with a walk, then Pohl drew another walk. But Spencer Kieboom popped up a bunt and Jon McGibbon grounded into an inning-ending 4-6-3 double play to keep Miami up 4-2. In the ninth inning, Jason Stolz led off with a single through the right side. Dominic Attanasio then hit a line drive, but Nedeljkovic got a glove on the ball and deflected it right to second base. Perez fielded the ball, stepped on second, and threw to first for the crucial double play. Brittle then grounded out to short to end the game. Every Hurricane starter had at least one hit. Perez, Fieger, and Mack totaled two hits apiece, while Carey had a team-high two RBIs. Miami accumulated 12 hits in all after registering just 11 combined hits in the first two games of the series. Pohl and Stolz had two hits apiece to lead Clemson, who amassed seven hits in the contest. Pohl added two RBIs as well. Clemson will host Winthrop at Doug Kingsmore Stadium on Tuesday at 6:30 PM.