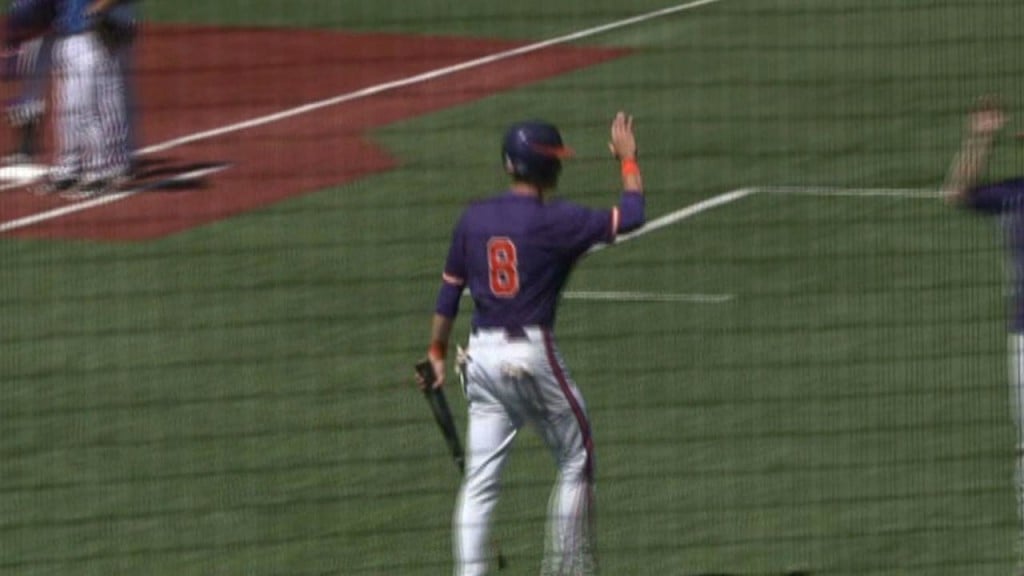 DURHAM, NC (CLEMSON ATHLETICS) – Thomas Brittle went 4-for-6 with a triple, double, five RBIs, and three runs to lead Clemson‘s 15-hit attack in its 11-5 win over Duke in front of 1,123 fans at Jack Coombs Field on Saturday afternoon. The Tigers, who took a 2-0 series lead, improved to 17-14 overall and 7-7 in the ACC. The Blue Devils fell to 13-19 overall and 5-9 in ACC play. For the second game in a row, the Tigers did not trail at any point. The Tigers held a 3-2 lead until they scored two runs in the sixth and one run in the top of the seventh to take a 6-2 lead. Duke clawed back with three runs in the bottom of the seventh to cut Clemson‘s lead to one run. However, the Tigers added five runs in the ninth inning, keyed by Brittle‘s three-run double, and won their fifth game in a row over the Blue Devils. Starter Dominic Leone (5-2) earned the victory by striking out nine in 6.1 innings pitched. He gave up nine hits, four runs, and two walks, but worked out of several jams. Patrick Andrews recorded his second save of the year by pitching the final 2.2 innings. He surrendered three hits and one run with one strikeout. Trent Swart (3-4), the first of four Duke pitchers, suffered the loss. He allowed 10 hits, four runs, and one walk with six strikeouts in 5.1 innings pitched. Like game-one on Friday, the Tigers took the game‘s first lead in the first inning. Brittle grounded a one-out single up the middle and moved to second on a wild pitch. Richie Shaffer then grounded another single up the middle to score Brittle. In the second inning, Mike Rosenfeld led off with a bunt single and scored on Will Piwnica-Worms‘ double to left-center to tie the score. Two batters later, Mark Lumpa laced a single through the right side to advance Piwnica-Worms to third, but Leone struck out the next two Blue Devils to end the inning. Clemson responded with two runs in the top of the third inning. Brittle led off with a bunt single and advanced to third on Shaffer‘s line-drive double off the top of the wall in left field. Phil Pohl‘s sacrifice fly to left-center scored Brittle, then Jon McGibbon flared a single to left field to plate Shaffer. In the bottom of the third inning, Andy Perez lined a one-out single to left-center and moved to second on a wild pitch. Two batters later with two outs, Rosenfeld grounded an 0-2 pitch through the right side for a single to score Perez. After the Tigers left runners on second and third without scoring in the fifth, they added to their lead in the sixth inning. Garrett Boulware led off with a double over the third-base bag. Two batters later with one out, Steve Wilkerson reached on an infield single to extend his hitting streak to 19 games. Brittle then ripped a triple to right-center to score Boulware and Wilkerson, giving the Tigers a 5-2 lead. Jay Baum reached as the leadoff batter of the top of the seventh inning on an error by shortstop Angelo La Bruna and advanced to second on Spencer Kieboom‘s single to right field. Boulware‘s sacrifice bunt moved the runners up a base, then Jason Stolz walked to load the bases. Wilkerson grounded out to first to score Baum. Jeff Kremer led off the bottom of the seventh inning with a single through the left side on a 1-2 pitch. Two batters later with one out, Andrew Istler reached on an infield single. After both runners moved up a base on a wild pitch, Rosenfeld grounded a single through the right side to score Kremer. Piwnica-Worms was hit-by-pitch to load the bases, then Jordan Betts plated Istler with a sacrifice fly to deep right field. Lumpa followed with a two-out single through the left side to score Rosenfeld, cutting Clemson‘s lead to 6-5. But the Tigers added five insurance runs in the ninth inning on only two hits to put the game out of reach. Baum led off with a walk and advanced to second on Kieboom‘s sacrifice bunt. Tyler Slaton, who entered the game in the eighth inning, fisted an 0-2 pitch down the right-field line for a single to score Baum. Stolz followed with a potential double-play grounder to first, but Perez‘s throw to second was errant and Slaton moved to third. Wilkerson loaded the bases with a walk, then Brittle laced a three-run double down the right-field line. Brittle, who advanced to third on the throw after his double, scored on Shaffer‘s sacrifice fly to right field. Brittle, in his first active season as a Tiger, established season highs for hits (4), RBIs (5), and runs (3) to lead Clemson‘s 15-hit attack. Shaffer went 3-for-4 with a double, two RBIs, and a walk, while Boulware went 2-for-3 with a run. Pohl added an RBI and extended his hitting streak to 10 games as well. Rosenfeld and Lumpa had three hits apiece to pace Duke, who amassed 12 hits in the contest. Rosenfeld added two RBIs and two runs. Clemson and Duke will play game-three of the three-game series on Sunday at 1:00 PM.