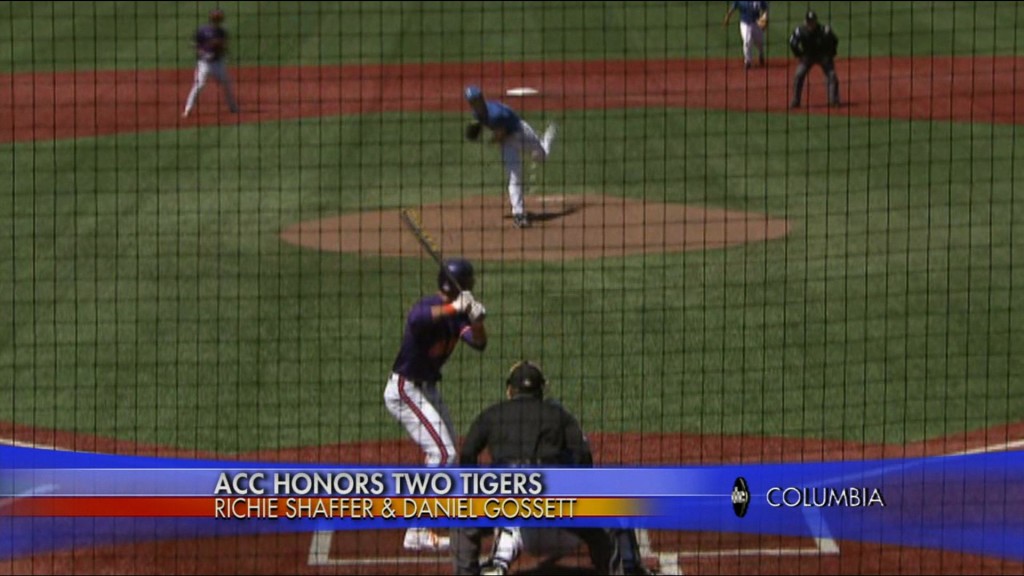 CLEMSON, SC (CLEMSON ATHLETICS) — Freshman righthander Daniel Gossett (Lyman, SC) was named one of four national players-of-the-week by Collegiate Baseball, while junior corner infielder Richie Shaffer (Charlotte, NC) was named ACC Player-of-the-Week for the third time in 2012. It was also the fourth time in Shaffer’s career that he received ACC Player-of-the-Week honors. Gossett struck out 15 batters against no walks in 9.0 scoreless innings pitched over two appearances (one start) last week. He also allowed just five hits (.156 opponents’ batting average) and played a hand in two victories. Against Winthrop on Tuesday, he struck out 13 batters while allowing just three hits (all singles), no runs, and no walks in 7.0 innings pitched to earn the win. The 13 strikeouts were the most by a Tiger since 2009. He also retired the first 15 batters of the game against the Eagles. Then at Duke on Sunday, he tossed 2.0 scoreless innings with two strikeouts to record the save in the Tigers’ 4-2 victory. On the season, he is 3-2 with two saves, a 4.66 ERA, and 37 strikeouts against 10 walks in 29.0 innings pitched over 10 appearances (four starts). Shaffer had at least two hits in all five games this past week and went 12-for-21 (.571) with seven RBIs and three steals. He also totaled one homer, one double, four runs, three walks, a .600 on-base percentage, and did not commit an error in 13 chances at third base to help the Tigers to four wins. In Clemson’s three-game sweep at Duke over the weekend, he was 7-for-13 (.538) with three RBIs and two steals. On the season, he is hitting .365 with seven homers, 12 doubles, one triple, 31 RBIs, 27 runs, 31 walks, a .493 on-base percentage, and five steals in 32 games (32 starts).