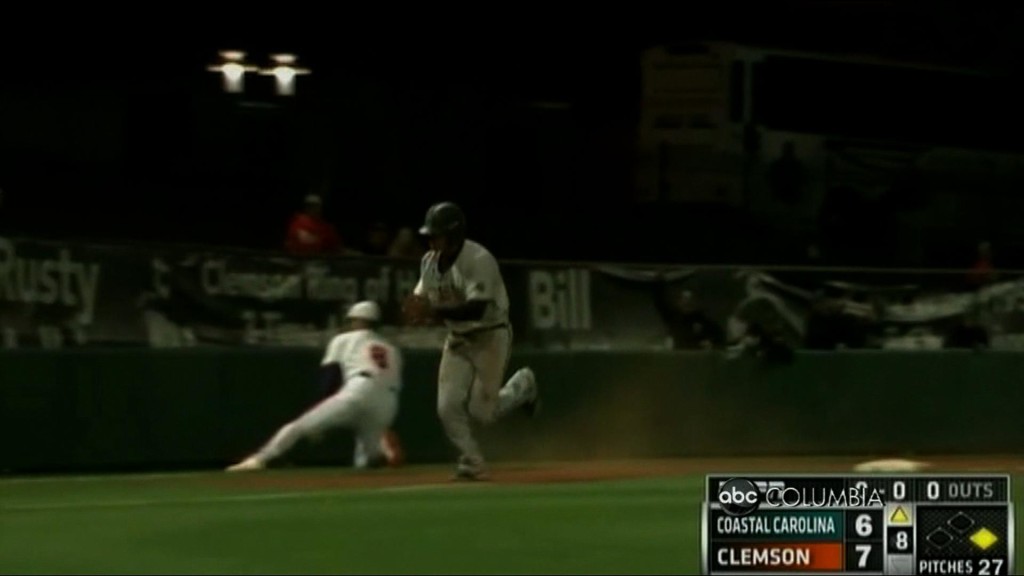 Clemson, SC (CU SID) — Rich Witten’s two-run double in the eighth inning broke a 7-7 tie and Coastal Carolina used its 15 hits to defeat Clemson 10-7 at Doug Kingsmore Stadium on Tuesday night. The Chanticleers improved to 27-13, while the Tigers dropped to 24-18. Clemson also fell to 5-1 in Tuesday games in 2012. The back-and-forth game saw the Tigers take a 2-1 lead with two runs in the third inning before Coastal Carolina scored two runs in both the fourth and fifth innings to take a 5-2 lead. Four Coastal Carolina errors in the sixth inning enabled the Tigers to score five runs and take a 7-5 lead. However, Coastal Carolina scored one run in the seventh inning and four more runs in the eighth inning to pull out the three-run win. Aaron Burke (5-3), the second of five Coastal Carolina pitchers, earned the win despite allowing four hits, two runs (one earned), and two walks in 2.2 innings pitched. Ben Smith retired all three batters he faced with two strikeouts to record his first save of the season. Patrick Andrews (1-3), the fourth of six Clemson hurlers, suffered the loss. He gave up two hits, four runs, and two walks with two strikeouts in 1.1 innings pitched. The Chanticleers grabbed the game’s first lead in the first inning. Ted Blackman grounded a one-out single through the left side and advanced to third on Daniel Bowman’s single through the right side. Blackman scored on Alex Buccilli’s groundout to first. In the third inning, Garrett Boulware and Jason Stolz led off with walks, then both runners moved up a base on Steve Wilkerson’s sacrifice bunt. Thomas Brittle grounded out to second to plate Boulware. After Richie Shaffer walked, Phil Pohl lined a two-out double to left field to score Stolz. Coastal Carolina responded with two runs in the fourth inning to regain the lead. Bowman led off with an infield single and stole second. Two batters later, Witten drew a one-out walk, then Tucker Frawley ripped an 0-2 pitch to left field for a single to load the bases. Sloan Gilliam walked on four pitches to score Bowman, then Justin Creel lofted a sacrifice fly to center to plate Witten. Jacob May led off the fifth inning with a double to right-center and advanced to third on Blackman’s sacrifice bunt. After Bowman walked, Buccilli walked on four pitches to load the bases. Witten struck out, but Frawley came through with a two-out single to center on a 1-2 pitch to score May and Bowman, giving the Chanticleers a 5-2 lead. In the sixth inning, four Coastal Carolina errors allowed the Tigers to score five runs and take a 7-5 lead. Pohl reached as the leadoff batter on a dropped pop-up by Creel and advanced to third on Jon McGibbon’s single to right-center. Jay Baum hit a potential double-play grounder to first as Pohl scored, but Gilliam’s throw to second was errant, allowing McGibbon to move to third base. Spencer Kieboom grounded a single through the right side to score McGibbon, then pinch-hitter Mike Dunster walked to load the bases. Stolz reached on a fielder’s choice back to the mound as Baum was retired at the plate. The throw from Frawley to first was errant, allowing Kieboom to score. Wilkerson grounded out to second to score Slaton, then Brittle hit a two-out single through the left side to score Stolz and up his hitting streak to 15 games. The Chanticleers responded with a run in the seventh inning. Bowman led off with a double to left field and advanced to third on Buccilli’s infield single. Witten grounded a single up the middle to score Bowman, then Frawley grounded out to advance both runners up a base. After Gilliam struck out for out #2, Creel walked to load the bases. Brian Pruett then struck out to end the inning and keep the Tigers ahead 7-6. Coastal Carolina put its leadoff batter on base for the fifth inning in a row when May led off the eighth with a walk. Blackman singled up the middle to move May to third, then May scored the tying run when Brittle’s throw to third base was errant. After Bowman was hit-by-pitch and stole second, Buccilli grounded out to short as both runners held at their bases. Witten then belted a double down the left-field line to score Blackman and Bowman, giving the Chanticleers a two-run lead. Frawley followed with a single to left-center to score Witten. Shaffer led off the ninth inning with a walk on five pitches, then Pohl singled to left field on an 0-2 pitch to bring the potential tying run to the plate. But McGibbon struck out, Baum flied out, and Kieboom struck out to end the game. Bowman went 3-for-4 with a double, four runs, a walk, and hit-by-pitch to pace the Chanticleers’ 15-hit attack. Frawley went 3-for-5 with three RBIs, while Witten went 2-for-4 with a double, three RBIs, two runs, and a walk. Blackman and Gilliam added two hits apiece as well. Pohl went 3-for-5 with a double and RBI to lead Clemson, who amassed nine hits in the contest. Brittle added a team-high two RBIs, while Stolz scored a team-high two runs. Clemson will travel to Atlanta, GA to face Georgia Tech in a three-game series starting Friday at 7:00 PM. The game will be televised live by CSS.