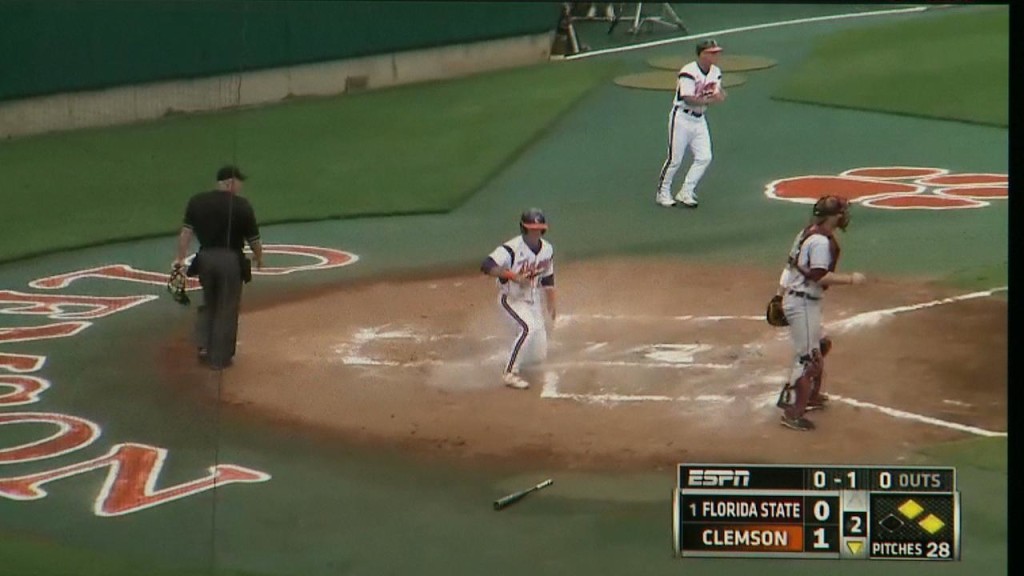 Clemson, S.C. (CU SID) — Clemson scored nine combined runs in the first four innings and held on for a 9-7 victory over #1 Florida State in the first game of a doubleheader at Doug Kingsmore Stadium on Monday afternoon. The Tigers, who took a 2-0 series lead, improved to 31-20 overall and 16-10 in the ACC. The Seminoles fell to 40-11 overall and 21-5 in ACC play. Clemson’s 31st win of the year also assured the Tigers of a final winning record for the 48th consecutive season and a final non-losing record for the 55th straight year. The loss meant that Florida State lost its first weekend series of the 2012 season. The Seminoles had won each of their last 12 regular-season weekend series dating to 2011, when Clemson handed the Seminoles a 2-1 series loss in Tallahassee to close the 2011 regular season. The win for the Tigers was also their 14th all-time victory over a top-ranked team. The Tigers built a 9-1 lead after four innings, but the Seminoles chipped away with two runs in the sixth, seventh, and ninth innings. In the ninth inning, they put the tying run on second base with one out, but fell short. Tiger starter Kevin Pohle (6-2) earned the win by tossing 6.0 strong innings. He gave up six hits, three runs (one earned), and one walk. Scott Firth pitched the final 2.2 innings with three strikeouts to record his second save of the season. Florida State starter Mike Compton (9-1) suffered his first loss of the year. He yielded six hits, six runs (three earned), and one walk with one strikeout in 1.1 innings pitched. Peter Miller pitched the final 4.1 innings without allowing a run as well. The three Florida State pitchers combined to strand 11 Tigers on base, including seven in scoring position. The Tigers grabbed the game’s first lead in the first inning after the first two batters were retired. Richie Shaffer flared a two-out double down the left-field line and scored on Phil Pohl’s single to left-center. Jay Baum followed with another double down the left-field line, but Pohl was thrown out at the plate to end the inning. In the second inning, Clemson took advantage of two Seminole errors to score five runs, three of which were unearned. Jon McGibbon led off with an infield single and Spencer Kieboom reached on a throwing error by third-baseman John Holland. Brad Felder followed with a single to center to score McGibbon. Two batters later, Steve Wilkerson laced a double to right-center to score Kieboom and Felder. The two-bagger also extended Wilkerson’s hitting streak to 13 games. After Thomas Brittle was hit-by-pitch, both Wilkerson and Brittle stole a base on the same pitch, then Wilkerson scored when the throw to third was errant. After Shaffer walked, Pohl struck out, and Baum was intentionally walked to load the bases, McGibbon drew a two-out walk on nine pitches to score Brittle. In the third inning, Josh Delph led off with a single up the middle and Jose Brizuela lined a 1-2 pitch to right field for a single. After Sherman Johnson’s lineout to right field moved Delph to third, Devon Travis reached on a fielder’s choice as Brizuela was retired at second and Delph scored. The Tigers added to their lead in the fourth inning. Shaffer led off with a walk and advanced to second on Pohl’s groundout to first. Baum walked as Shaffer moved to third on a wild pitch, then Baum stole second. Two batters later with two outs, Kieboom blooped a double down the left-field line to score Shaffer and Baum. Felder followed with a single up the middle to plate Kieboom. In the sixth inning, James Ramsey drew a one-out walk after being down in the count 0-2 and Jayce Boyd lined a 1-2 pitch to left field for a single. Both runners moved up a base on Lee Howard’s groundout, then John Nogowski reached with two outs on a throwing error by Shaffer at third that allowed Ramsey and Boyd to score. The Seminoles cut further into Clemson’s lead in the seventh inning. Delph led off with a single to right-center and Brizuela was hit-by-pitch. Giovanny Alfonzo reached on a fielder’s choice as Delph was retired at third, then Travis walked on 10 pitches to load the bases. Ramsey was hit-by-pitch to score Brizuela, then Boyd lofted a sacrifice fly to center to score Alfonzo. Travis led off the ninth inning with a double to left-center, then Ramsey reached on an infield single. Boyd’s sacrifice fly to right-center plated Travis, then pinch-hitter Stephen Spradling singled through the left side. Nogowski followed with a single to left-center to load the bases, then Seth Miller grounded a 1-2 pitch through the right side for a single to score Ramsey. But Delph flied out to right-center for out #2, then Brizuela struck out swinging to end the game. Felder led Clemson’s nine-hit performance by going 2-for-4 with two RBIs and a run, while Kieboom totaled a team-high two RBIs. Clemson also amassed a season-high five stolen bases. Delph went 3-for-5 with a run to lead the Seminoles, who accumulated 12 hits. Clemson and Florida State will conclude the doubleheader and three-game series on Monday at 6:00 PM. The game will be televised live by ESPNU.