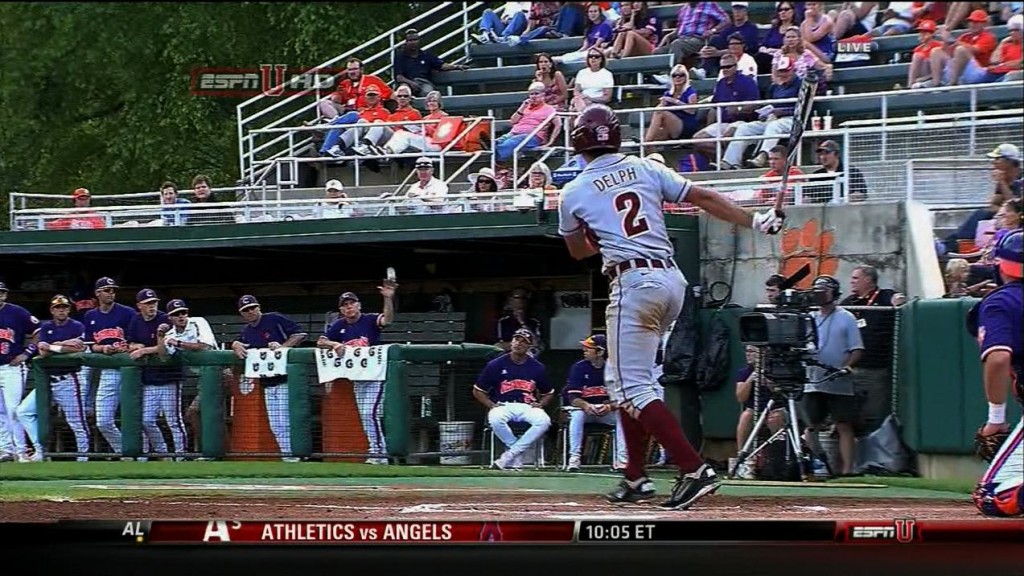 Clemson, S.C. (CU SID) — Top-ranked Florida State pounded out 16 hits en route to a 9-5 win over Clemson in front of 4,965 fans in the second game of a doubleheader at Doug Kingsmore Stadium on Monday night. The Seminoles, who clinched the ACC Atlantic Division title win the victory, improved to 41-11 overall and 22-5 in the ACC. The Tigers, who won the series 2-1, fell to 31-21 overall and 16-11 in ACC play. The Seminoles scored two runs in the first inning and four runs in the third inning to build a 6-0 lead. After Florida State scored three runs in the fifth inning to take a 9-2 lead, Jason Stolz hit a three-run homer in the sixth inning to bring the Tigers within four runs. But righty relievers Gage Smith and Robert Benincasa shut the door and preserved the Seminole win. Smith (2-0), the third of four Florida State pitchers, earned the win by tossing 2.1 hitless and scoreless innings with two strikeouts. Benincasa pitched a perfect ninth inning with two strikeouts to close out the game. Tiger starter Jonathan Meyer (2-5) suffered the loss, as he allowed six runs on 10 hits in 2.1 innings pitched. Patrick Andrews pitched a career-long 6.2 innings out of the bullpen and gave up three runs. The Seminoles wasted little time taking the game’s first lead in the first inning. Sherman Johnson led off with a single through the right side and advanced to third on Devon Travis’ double down the left-field line. James Ramsey reached on a fielder’s choice to Meyer, who turned and threw to third to retire Johnson. Jayce Boyd was hit-by-pitch to load the bases, then Stephen McGee lofted a sacrifice fly down the right-field line to score Travis. Josh Delph followed with a two-out single through the left side to plate Ramsey. In the second inning, Seth Miller led off with a single to right field and Jose Brizuela walked after being down in the count 0-2. Johnson reached on a bunt single to load the bases with no outs, but Meyer retired the next three Seminoles without allowing a run. The Seminoles added four runs to their lead in the top of the third inning thanks to five-straight hits. With one out, Delph lined a 1-2 pitch to left-center for a single, then John Nogowski lined another 1-2 pitch for a single, this time to left field. Miller followed with a single up the middle on an 0-2 pitch to score Delph, then Brizuela laced a triple down the right-field line to score Nogowski and Miller. Johnson then belted a 1-2 pitch down the right-field line for a double to plate Brizuela. In the bottom of the third inning, Thomas Brittle drew a one-out walk on 10 pitches after being down in the count 0-2, then Shaffer singled down the left-field line to move Brittle to third base. Brittle scored on Phil Pohl’s sacrifice fly to right-center. Clemson cut further into the Seminoles’ lead in the fourth inning. Brad Felder ripped a two-out double to right field and Stolz grounded a double over the third-base bag to score Felder. The Seminoles responded with three runs in the fifth inning. Nogowski led off with a single through the right side and Miller walked. After Brizuela walked on four pitches to load the bases with no outs, Johnson belted a 1-2 pitch down the right-field line for a double to score Nogowski and Miller. Two batters later, Ramsey lofted a sacrifice fly to right-center to score Brizuela. In the sixth inning, Spencer Kieboom and Felder both drew one-out walks, then Stolz blasted a three-run homer to left-center, his fifth long ball of the season. Johnson led Florida State’s 16-hit attack by going 4-for-4 with two doubles, three RBIs, and two walks, as he tied his career high for hits and reached base in all six of his plate appearances. Nogowski and Miller totaled three hits and two runs apiece, while Delph added two hits. Florida State put six of its leadoff batters on base as well. Stolz led the Tigers with a homer, double, and a career-high four RBIs. Shaffer added two hits for the Tigers, who totaled nine hits, but only put one leadoff batter on base. Wilkerson went 1-for-5 to extend his hitting streak to 14 games. With the loss on Monday night, Clemson split the doubleheader, ending its streak of six consecutive doubleheader sweeps dating to 2010. Since the beginning of the 2010 season, the Tigers are 18-2 in doubleheader games, as their only two losses came to teams ranked #1 in the nation, including at top-ranked Virginia in 2010. Clemson will return to action on Tuesday when it hosts Furman at 6:30 PM at Doug Kingsmore Stadium. It will be Clemson’s last regular-season home game in 2012.