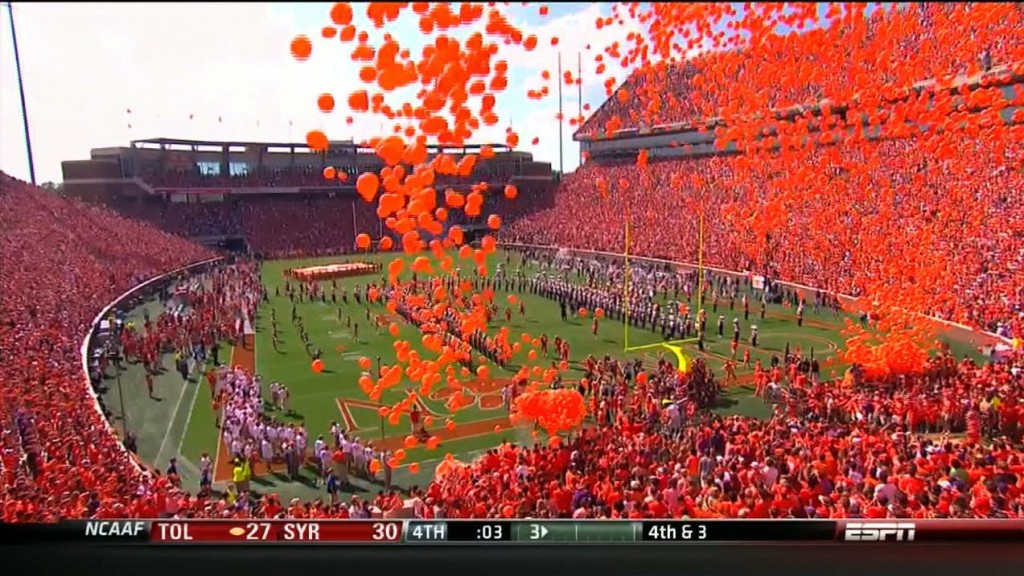 GREENSBORO, N.C. (ACC) — A prime time kickoff for the Eighth Annual Atlantic Coast Conference Football Championship Game, three national exposures on the opening weekend of the 2012 season, and a minimum of 13 nationally-televised exposures (ABC, NBC, ESPN, ESPN2 or ESPNU) highlights the early season TV and Game Time schedule announced Thursday by the Atlantic Coast Conference. Included in the release are game times and TV networks for all home games for the league in its first three weeks of the season, as well as for all of its 2012 Thursday night games on ESPN and all national television games confirmed to date. The 2012 Dr Pepper ACC Football Championship Game, which will be played on December 1 in Bank of America Stadium in Charlotte, N.C., will be nationally televised by either ABC, with an 8 p.m. kickoff, or ESPN at 7:45 p.m. It will be the fourth straight prime time exposure for the ACC title game which drew a sellout crowd of 73,675 fans last year and has averaged 73,027 fans in its two years in Charlotte. A pair of ACC teams will be playing in the two Chick-fil-A Kickoff Games this year that will be played on back-to-back days in Atlanta’s Georgia Dome. NC State faces Tennessee on Friday, Aug.31, in a 7:30 p.m. game which will be nationally televised by ESPNU. Clemson, the ACC’s 2011 champion, will then face Auburn on Saturday, Sept. 1, in a 7 p.m. contest that will be nationally televised by ESPN. The Chick-fil-A sponsored games are the first of three nationally televised games on the opening weekend of the season as Georgia Tech will travel to Blacksburg, Va., to meet Coastal Division rival Virginia Tech in the ACC’s annual Labor Day Monday night football game, which will be telecast by ESPN with an 8 p.m. kickoff. Monday’s game marks the eighth time ACC teams have met in the prime national television slot on Labor Day. It is the first appearance by Georgia Tech and the second by Virginia Tech, which faced Boise State on Labor Day Monday in 2010. The rivalry between the Hokies and Yellow Jackets has become pivotal to the ACC Football Coastal Division race, as in each of the past seven years the winner of the Virginia Tech-Georgia Tech contest has won the Coastal Division title and advanced to the ACC Football Championship Game. The ACC will again have two syndicated packages produced by the ACC Network this fall. The ACC Network will produce a game of the week which will be seen across the nation on a network of stations which last year included six of the top 10 markets in the nation–including Los Angeles (2), Philadelphia (4), San Francisco (6), Boston (7), Washington (8) and Atlanta (9)–11 of the nation’s top 20 markets and 50 of the nation’s top 100, while averaging 75 markets each week. In addition, ACC Network games are also available digitally on ESPN 3 and on the ACC App for I-Phones, I-Pads and Droid mobile devices. The ACC Network package will debut with North Carolina hosting Elon on Sept. 1. The ACC Network will also air Ball State at Clemson on Sept. 8 and Connecticut at Maryland on Sept. 15. All the games of the ACC Network this year will feature 12:30 p.m. kickoffs. The Regional Sports Networks (RSNs) throughout the ACC footprint–Fox Sports Florida, Fox Sports South, Fox Sports Carolinas, Comcast Sports Mid Atlantic and the New England Sports Network (NESN)–will again air a syndicated package of 14 games which will begin with Virginia hosting Richmond on Sept. 1, and continue on Sept. 8 with North Carolina at Wake Forest and on Sept. 15 with Furman at Clemson. All three games will have a 3 p.m. kickoff. All RSN Games are also available on a series of other RSNs outside of the ACC footprint and also digitally on ESPN3. The schedule features a minimum of 13 televised games in the first three weeks of the season, and that total will rise as several of the league’s seven away non-conference games during this period are likely to be televised as well. The game times and networks for those seven games, which are controlled by their host conferences, are expected to be announced later this year in June. ESPN will air four consecutive Thursday night games during the season featuring ACC teams, all with 7:30 p.m. kickoffs, beginning with Clemson at Wake Forest (Oct. 25), and including Virginia Tech at Miami (Nov. 1), Florida State at Virginia Tech (Nov. 8) and North Carolina at Virginia (Nov. 15). Finally, 11 ACC games will be available exclusively over ESPN’s web-streaming platform of ESPN3 which is now available in more than 73 million homes, making telecasts of all of the Conference’s home games in the first three weeks of the season available to national audiences. Clemson’s 2012 Early Season Football Television Schedule Date