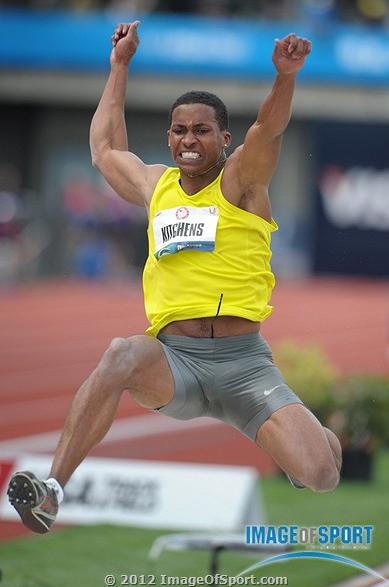 (CU SID) — Former Clemson All-American George Kitchens became the first athlete with ties to Clemson track & field to qualify for the Team USA squad headed to London, England this summer for the Olympic Games. Kitchens, who jumped for the Tigers from 2002-05, surpassed the “A” standard for London with a personal best jump of 26‘11.25″ on his third attempt Sunday at Oregon‘s Hayward Field and finished in third place at the Olympic Trials. Kitchens is the fourth Clemson athlete to qualify for the London Games, all from the Tiger track & field program. Warren Fraser (Bahamas), Patricia Mamona (Portugal) and Marlena Wesh (Haiti) have all qualified. Kitchens will team with Marquise Goodwin and Will Claye to represent the red, white and blue in the men‘s long jump. He is the first long jumper from the Tiger men‘s program to advance to the Olympic Games. Kitchens, who trained in Clemson after his collegiate eligibility expired and finished third at the USA Outdoor Championships in 2009, hit a mark of 26‘3.75″ on his second attempt to move into the top three Sunday. He improved on the mark with the A standard leap of 26‘11.25″ in the final preliminary attempt, solidifying his position. His mark held through the finals, where five competitors behind him tried to knock him out of third but all fell short. Another former Clemson athlete, George Fields (2005-09), competed alongside Kitchens in Sunday‘s long jump final. He placed eighth in his first appearance at the U.S. Olympic Trials with a mark of 24‘11.75″. Also in action Sunday were Justin Murdock and Travis Padgett in the men‘s 100 dash semifinals. Neither advanced to the final, with Padgett (10.32) edging Murdock (10.33) at the tape in the first heat. Clemson graduate and Upstate South Carolina native Alyssa Kulik will compete in the first of two semifinals of the women‘s steeplechase on Monday in Eugene. She is scheduled to run at 7:50 PM EDT.