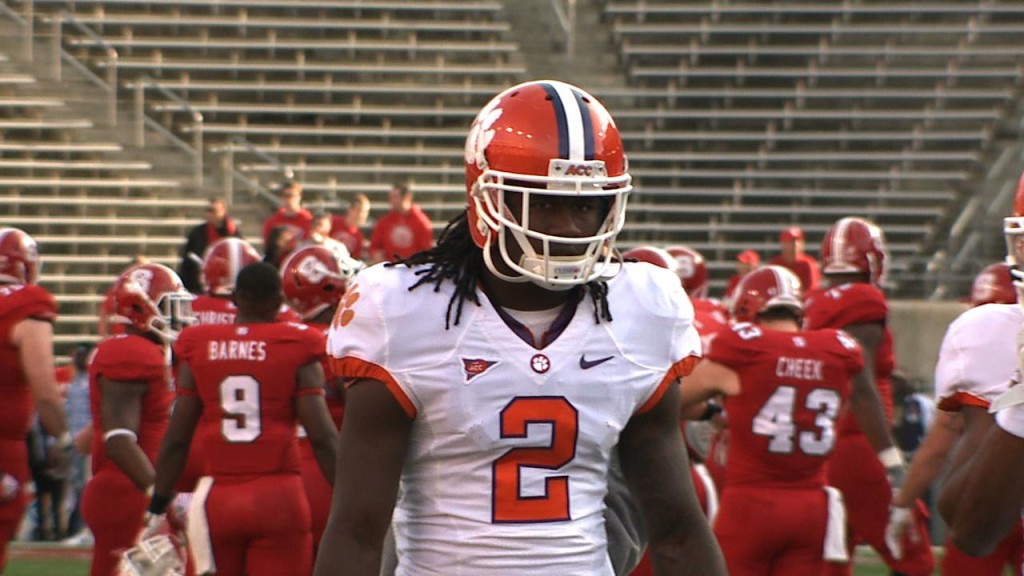 CLEMSON (AP) — Clemson coach Dabo Swinney‘s not reveling in last year‘s first Atlantic Coast Conference title in 20 years or in the unprecedented Orange Bowl flop that followed a month later. “This is a team that‘s excited about the upcoming season,” Swinney said Tuesday. “There‘s no lingering hangover from the bowl, just like there‘s no lingering hangover from winning the ACC.” The Tigers, in going 10-4 last year, knocked down several walls built up since they last captured the ACC championship in 1991. Much of those strides were forgotten in Clemson‘s first BCS game when it was thumped 70-33 by West Virginia, surrendering the most points in postseason history. “I keep hearing, ‘We weren‘t ready. We didn‘t do this,”‘ Tigers defensive end coach Marion Hobby said. “I‘m going to give the credit to West Virginia. They played well enough to kick our butts.” The defensive meltdown led to Swinney cutting ties with coordinator Kevin Steele and replacing him with longtime Oklahoma defensive coordinator Brent Venables. Swinney and his staff haven‘t talked much about last year at all — not the positives or the negatives. “We said that back in the spring, we weren‘t going to focus on what happened before,” Swinney said. “It‘s about this team.” And this is a team with plenty of questions for Swinney and his staff to address. The defensive line lost its most productive players in Andre Branch, Brandon Thompson and Rennie Moore. Last year‘s top tackler, safety Rashard Hall, missed spring practice after having knee surgery while freshman linebacker Tony Steward — one of the team‘s most promising defenders — missed half of last season with a knee injury. The offensive line lost three senior starters and will only have center Dalton Freeman back in a position he began last season at. The running back position took a hit in its depth when prized, five-star tailback Mike Bellamy did not qualify academically and left school. Clemson‘s breakout star from last year, receiver Sammy Watkins, will likely get some unwanted scrutiny after a spring arrest for drug possession. Swinney said Watkins is doing everything he must and more to regain the trust of his coaches and teammates. Swinney promised after Watkins arrest there would be punishment, but says he‘s still a couple of weeks away from announcing if Watkins will miss any or all of Clemson‘s opener against 2010 national champion Auburn at the Georgia Dome. “There‘s a chance he could play” against Auburn, Swinney said. “Anything‘s possible.” Offensive coordinator Chad Morris said the players were stung by the Orange Bowl blowout and took it on as motivation. Morris said the returning players have to come into fall camp Aug. 3 hungry to rebound from that defeat. “There‘s got to be that sense of hunger. We always talk about the hungry cat hunts best,” said Morris, in his second season with the Tigers. “How hungry are these guys? All indications from the way they worked in the spring and this summer, they‘re on a mission. That‘s what you want from your leaders.” Morris expects quarterback Tajh Boyd to be one of Clemson‘s main leaders this year. The incoming junior set school records with 38 touchdown passes and 3,824 yards passing. When Boyd was on target and mistake-free, the Tigers were 8-0 and one of the major surprises in college football. Boyd, though, stumbled along with the rest of the Tigers down the stretch in losing three of their final four regular-season games. Morris said Boyd‘s going to face plenty of pressure in practice to become more than the game manager he was a year ago. “He‘s got to be the one when he steps on the field to make those 10 other guys better,” the coordinator said. Swinney‘s confident a year of growth for his younger players like Watkins and Boyd will keep his team pointed towards a repeat championship. Swinney and his staff aren‘t naive, though. They know their players can‘t totally forget the sick feeling as they left the Orange Bowl last January. “Hey, you lost your last game. It is what it is,” Clemson secondary coach Charlie Harbison said. “I don‘t like. I can‘t sit here and tell you I do. And the bottom line is the kids don‘t like it either. But you‘ve got to go back to work and fix your problems.”