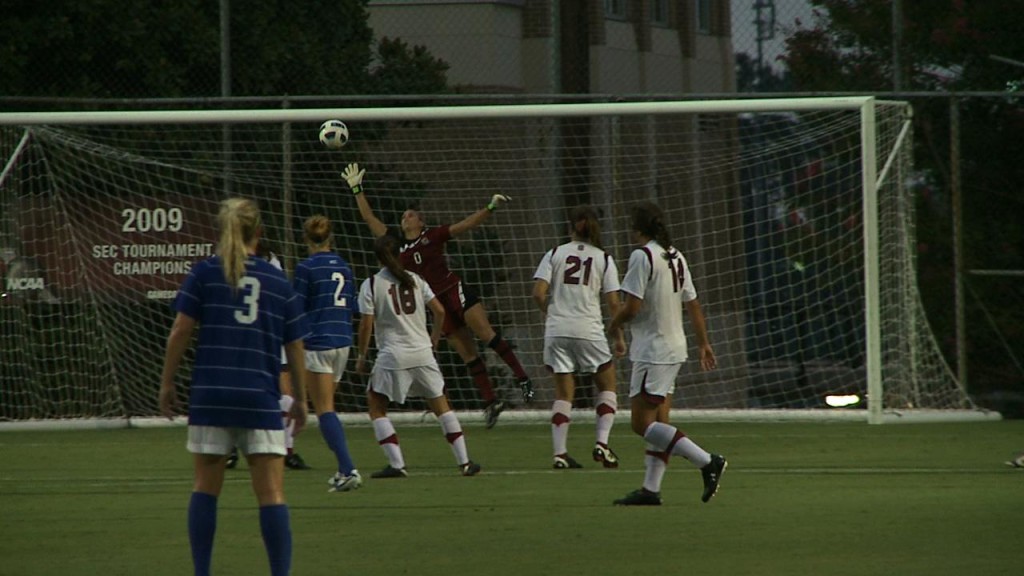 COLUMBIA, S.C. (USC SID) — No. 2 Duke topped No. 24 South Carolina, 2-0, in a non-traditional exhibition match Thursday night at Stone Stadium as both teams continue preseason training for their respective 2012 seasons. Playing three 30-minute periods that were interrupted by a 30-minute weather delay midway through, Duke earned goals by Kim DeCesare (12th) and Katie Trees (73rd) in the first and third periods, respectively. Last season‘s national runner-up maintained a strong opening period with a 6-0 shot edge before the freshman-heavy Gamecocks rallied to lead the shot count in both the second and third periods. Darien Vercillo and Alex Holland shared duties in goal for South Carolina with Holland registering three saves in 77 minutes of action. Every player available played for the Gamecocks as head coach Shelley Smith was able to tinker with lineups and formations as part of her preseason preparation for the upcoming campaign. “It was exactly what we needed out of this game,” Smith said. “We needed to see players play. We had an opportunity to play a great opponent like Duke that challenged us. We had a chance to move people around, and it was a great opportunity to see where the team is now to prepare for the start of the season next week.” South Carolina opens its season Friday, August 17 at UW-Milwaukee. Fans can get their first look at the 2012 Gamecocks this Sunday at Fan Appreciation Day slated to begin at 12:30 p.m. at the Colonial Life Arena. Posters will be available for fans to get signed by their favorite Gamecocks.