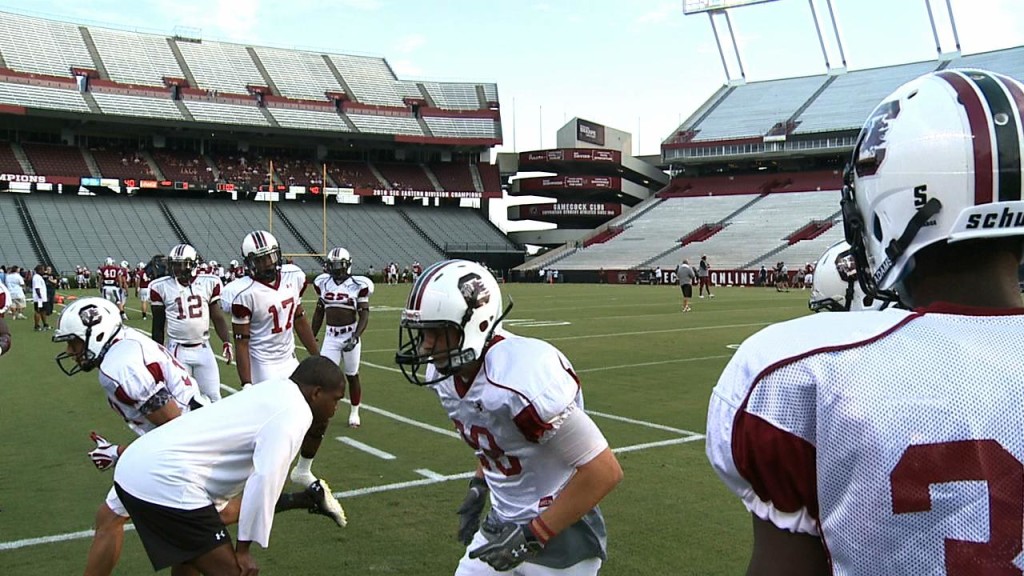 Columbia, S.C. (USC SID) –The University of South Carolina football team worked out in full pads and weathered intermittent rain showers Tuesday morning. The practice at the Bluff Road practice fields lasted a little over two hours. The Gamecock secondary is still a little bit of a work in progress as it looks to overcome the loss of senior cornerback Akeem Auguste, who has been sidelined indefinitely with a groin/thigh injury. “To be honest with you, it‘s really about whoever is playing best at that particular time,” said secondary coach Grady Brown in regards to replacing Auguste. “Jimmy (Legree) has played a lot of football for us around here. He‘s done a good job thus far in training camp and making a lot of plays. Ahmad (Christian) has a lot of talent as well. He‘s coming back from an injury, so we‘ll look to get him some reps. T.J. Gurley is a young guy that‘s doing a good job. You always hear me talk about developing players and this is a prime example as to why you have to have as many players ready as possible. “Playing on the perimeter is a situation where if you can play, you can play,” continued Brown. “It‘s not like when you‘re playing defensive line and banging on guys every play. Perimeter is really a game where if you can run, can jump, can catch the ball and know how to cover, you can go out there and play. Experience is great, I‘m not downplaying that, but if you‘re ready to play, you can go out and get it done.” “I‘m just ready to step up and accept responsibility,” said Legree. “I was anticipating (becoming a starter). I‘ve just got to be ready to handle it. It‘s time for me to step up. Corner is my natural position, it‘s where I‘m more comfortable,” said Legree, who started the first two games of the 2011 season at free safety. Among those Gamecocks who did not practice on Tuesday were linebacker Reginald Bowens (groin), defensive tackle Phillip Dukes (concussion) and wide receiver Damiere Byrd (shoulder sprain). The Gamecocks are scheduled to have their final two-a-day on Wednesday, with practices scheduled for 8:30 a.m. and 7:30 p.m. Fall semester classes at the university get underway on Thursday.