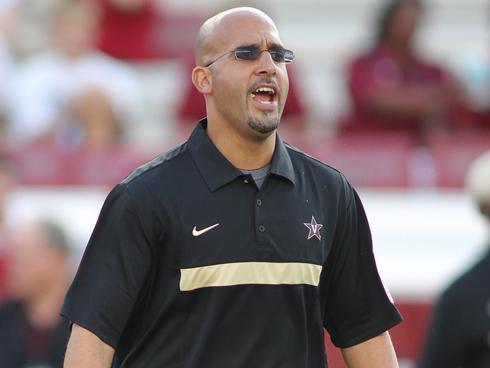 NASHVILLE, Tenn. (AP) — Vanderbilt coach James Franklin says he heard from the Southeastern Conference office 15 minutes after his Commodores left the field with a 17-13 loss to No. 9 South Carolina. He‘s not saying what he was told about the lack of a flag on an obvious pass interference that ended the Commodores‘ bid for an upset. South Carolina safety D.J. Swearinger grabbed Vanderbilt receiver Jordan Matthews‘ left arm as the ball arrived, preventing him from possibly catching the pass deep into Gamecocks‘ territory. The Gamecocks ran out the clock for the win. Franklin said Monday his Commodores didn‘t play as clean as he would‘ve liked but says they played pretty well considering it was the season opener against a ranked opponent. Vanderbilt visits Northwestern on Saturday night. Copyright 2012 The Associated Press. All rights reserved. This material may not be published, broadcast, rewritten or redistributed.