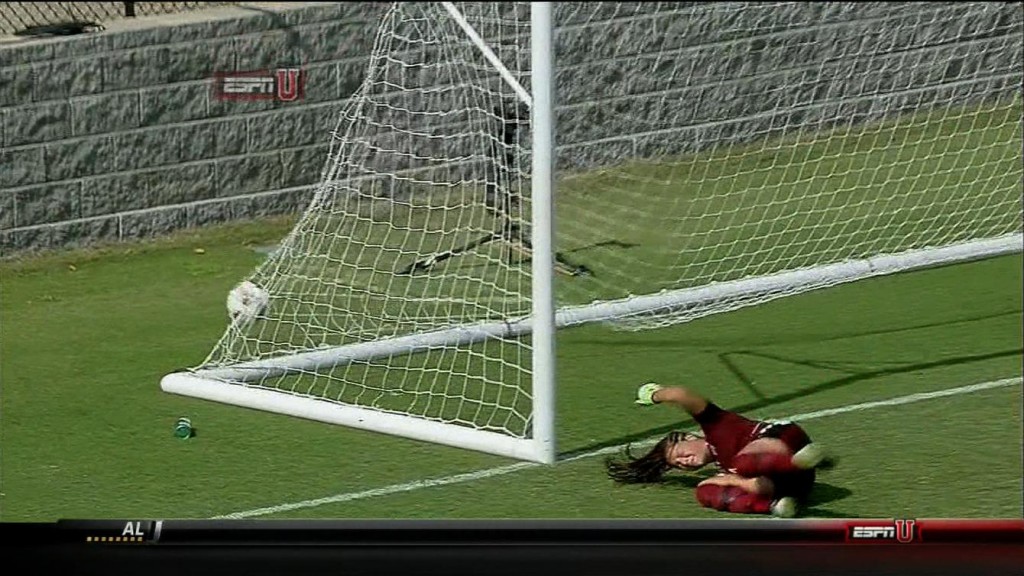 COLUMBIA, S.C. (USC SID) — South Carolina sophomore Sabrina D‘Angelo earned a career-high nine saves to weather a second half wave of attack, but No. 17 Missouri was able to earn the game-winning goal with two minutes remaining to defeat the Gamecocks, 1-0, Sunday in match that was televised nationally on ESPNU. D‘Angelo surpassed her previous career-high of eight saves set against Stanford in the 2011 NCAA Second Round and played one of her most stellar matches between the pipes after coming back from Friday‘s game that she was forced to leave due to injury, but the Tigers (7-1-0, 2-0-0 SEC) had a late goal by Dominique Richardson at 87:58 to hand the Gamecocks (3-3-2, 0-1-1 SEC) the loss in the first meeting between the new SEC rivals. “Sabrina had an amazing game,” South Carolina head coach Shelley Smith said. “Nothing was a threat. For as many shots as they had, they were long range and nothing that we were nervous about going in. She did a great job to stifle opportunities off corners and set pieces. It‘s unfortunate to have a player that could turn and get free in the box to shoot. You hope Sabrina can come up with the save, but that‘s unfair to ask her to come up with everything like that. She‘s a solid goalkeeper and deserved the shutout today.” The Gamecocks, playing with a new lineup with the loss of Christa Neary on the backline, nearly broke the game open with attacking opportunities in both halves that ended with the partisan crowd asking for penalty kicks on three occasions, but it was the Tigers who would come through with the goal when Richardson collected a ball from Abi Raymer from 12 yards out and turned for a strike that hit low and to the left. “They brought a lot of energy,” Smith said of the attitude after the lineup change. “They wanted to compete and win. After a disappointing tie on Friday night, we wanted to come out and prove ourselves. I thought they did that, and they deserved more. A few of those plays in the box I thought we had chances to score. We didn‘t get the call we needed and deserved, but our effort was tremendous.” South Carolina came out in the opening half as if it didn‘t play a double-overtime match Friday by coming out and attacking the Tigers early. With a 3-1 shot edge in the opening 20 minutes, the Gamecocks nearly put a goal on the board in the 21st when Coryn Bajema rifled a shot from range that necessitated a tip-save into the cross bar by Missouri goalkeeper McKenzie Sauerwein. The follow-up attempt by Stevi Parker was also saved by the keeper to keep the Gamecocks off the board. Danielle Au hoped for a penalty kick opportunity in the 29th after going down while battling two Tigers in the penalty area, but the junior was whistled for a handball to negate the potential goal-scoring opportunity. Missouri‘s best look in the half came in the 32nd when Reagan Russell was able to get a look on D‘Angelo, but the goalkeeper pulled out the save. After trailing 7-3 in shots in the first 45 minutes, Missouri came out firing in a second half that saw them attempt 14 shots. Kaysie Clark had the first good look of the day for the Tigers in the 58th from within 18 yards, but her attempt was saved by D‘Angelo. Richardson took a shot in front of the mouth of the goal in the 68th that D‘Angelo was again able to muffle before South Carolina began to reclaim possession in the final 15 minutes. Courtney Angotti-Smith seemingly gave the Gamecocks their opportunity at the win after beating the backline in the 79th minute before getting clipped inside the penalty area, but the contact was ruled clean. The Gamecocks continued the role of aggressor until the Tigers were able to muster their final attacks in the last two minutes that led to Richardson‘s goal. “I felt good about the step forward we made today to battle and compete,” Smith said. “It‘s difficult on Sundays against a good time like Missouri. We had to come out fighting. We knew we‘d have a battle. I thought we stepped up our play and had great chances to put ourselves in position to win the game with several opportunities. Unfortunately it didn‘t go our way, but we battled. If we played that way in games prior we would have more wins at this point.” South Carolina hits the road for the first time in a month with a trip to take on SEC West foes Texas A&M and Arkansas. The match against the No. 10 Aggies will be the first SEC conference game at Ellis Field for new edition Texas A&M.