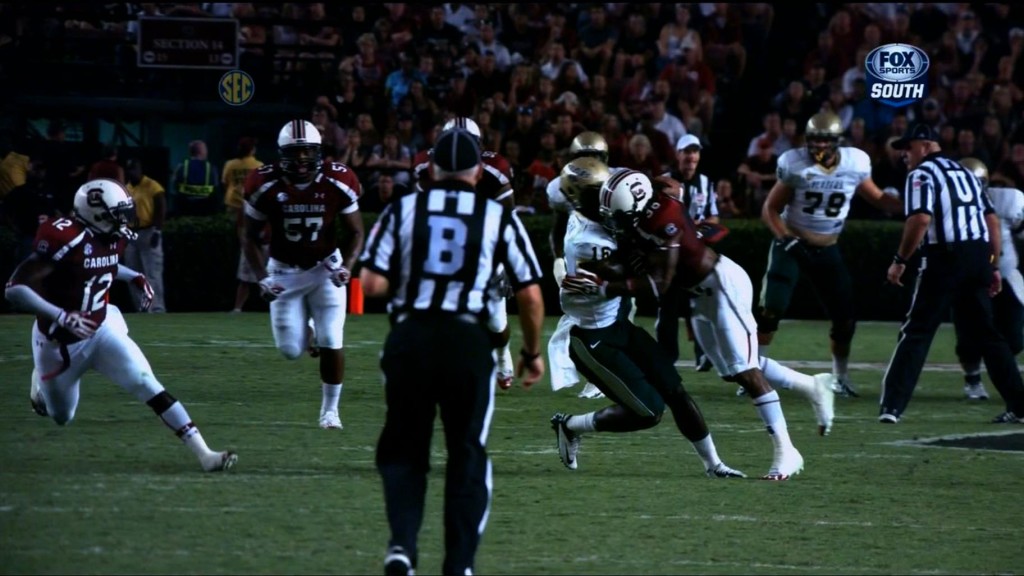 BIRMINGHAM, Ala. (SEC) — Upon review of game tapes of the football game between the University of Alabama-Birmingham and the University of South Carolina, played in Columbia, S.C. on Saturday, Sept. 15, 2012, Southeastern Conference Commissioner Mike Slive has announced that South Carolina senior defensive back D.J. Swearinger has been suspended for the Sept. 22 Missouri at South Carolina football game. This action is the result of a flagrant and dangerous act which occurred at the 5:46 mark in the third quarter. The action is in violation of Rule 9-1-4 of the NCAA Football Rule Book, which reads, “No player shall target and initiate contact to the head or neck area of a defenseless opponent with the helmet, forearm, elbow or shoulder.” By playing rule, a defenseless opponent is defined by “one who because his physical position and focus of concentration is especially vulnerable to injury.” One of the examples in the rule book is a receiver whose focus is on catching a pass. The NCAA Football Rules Committee and the SEC have made protection of defenseless players a point of emphasis for the 2012 season. The NCAA Football Rule Book requires a conference to automatically initiate a video review for possible additional sanctions before the next scheduled game (Rule 9-6-2). This action is taken in accordance with Southeastern Conference Constitution, Article 4.4.2 (d) which states that a student-athlete may be suspended if it is determined that the student-athlete has committed a flagrant or unsportsmanlike act. “These rules are for the protection of the health and safety of our players on both sides of the ball,” said SEC Commissioner Mike Slive. “It is imperative that our student-athletes understand the importance of this rule. Our motivation in making these decisions is to protect our student-athletes.”