Lattimore Out For The Season 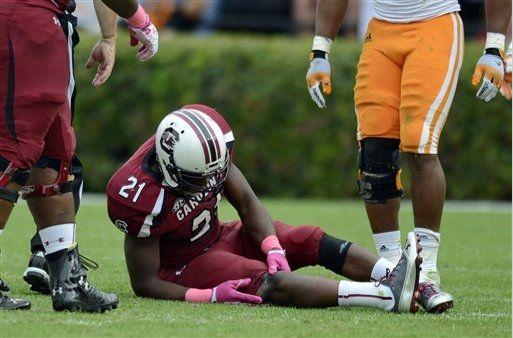 COLUMBIA, S.C. (AP) — South Carolina star Marcus Lattimore was taken to a hospital and is out indefinitely because of an injury to his right knee suffered against Tennessee on Saturday. Lattimore was running through the left side when he was struck around the knees by Volunteers defensive back Eric Gordon, Lattimore’s right leg whipping around and slamming against the turf. South Carolina trainers immediately rushed to his side, keeping Lattimore flat on his back as the junior attempted to sit up and see the injury. “I just tried to tell him to stay mentally strong,” said receiver Ace Sanders, whose eyes teared up when discussing Lattimore. “I saw the look in in his eyes when he was on the ground and he was really heartbroken.” Lattimore was taken off the field on a cart and went to the hospital for further evaluation. Gamecocks coach Steve Spurrier didn’t give details of the injury, only that it was every bit as devastating as the one to Lattimore’s left knee last fall at Mississippi State. Lattimore had surgery to repair ligaments and cartilage, then needed six months of rehabilitation and recovery before he was cleared to return to action. The school announced after South Carolina’s 38-35 win that Lattimore was out indefinitely. Quarterback Connor Shaw said the Gamecocks (No. 13 BCS, No. 17 AP) were feeling down on the sidelines after watching Lattimore leave. “But I felt like we bounced back and really played for him,” Shaw said. Shaw threw for a career-high 356 yards. He passed for three touchdowns and ran for another as the Gamecocks (7-2, 5-2 Southeastern Conference) broke a two-game losing streak. Despite last season’s injury, Lattimore was considered one of the SEC’s best running backs and a likely NFL first-round pick if he opted to leave school early. This injury looked as devastating as in 2011 and could keep Lattimore off the field the rest of this year, too. After several minutes lying on the field, Tennessee’s players came out to wish Lattimore well. South Carolina’s entire team followed as the crowd at Williams-Brice Stadium chanted Lattimore’s name. “I told him we loved him and to hang in there,” Spurrier said. Spurrier sent Lattimore a game ball through the team chaplain. Lattimore’s mother, Yolanda Smith, joined her son in the locker room. Former South Carolina defensive lineman Melvin Ingram, a first-round pick of the San Diego Chargers last April, posted on Twitter, “Your in my prayers bro.” Several other sports figures sent their wishes via social media, including U.S. women’s soccer star Abby Wambach, LSU coach Les Miles and Washington Redskins quarterback Robert Griffin III. Lattimore started the season strongly, but he and the Gamecocks ran into problems the past two weeks at LSU and Florida. Lattimore rushed for 48 yards combined in those games because of a hip bruise. Coming into this game, Spurrier had said Lattimore was 100 percent and would carry the load for the Gamecocks. Lattimore rushed for 65 yards, including a breakaway 28-yard TD run, in the first half against Tennessee after coming in with 597 yards rushing and 10 touchdowns this season. He became an instant star as a freshman, rushing for 1,149 yards and 17 touchdowns. Lattimore was on his way to eclipsing those numbers as a sophomore until the injury at Mississippi State. He holds South Carolina records with 41 overall touchdowns and 38 on the ground. Tennessee coach Derek Dooley said his players rallying to Lattimore’s side was indication of the enormous respect players have for South Carolina’s star. “Nobody wants to see that happen,” he said.