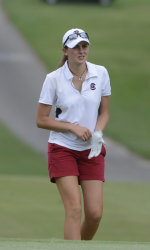 LAUSANNE, Switzerland (USC SID) — South Carolina junior Justine Dreher made a charge up the leaderboard on Sunday at the Women‘s Swiss International Amateur Championship to finish tied for third at the Golf Club de Lausanne. Dreher carded a 6-over 78 in the second round on Sunday morning but bounced back with a 2-under 70 in the third round in the afternoon to come up two strokes shy of tournament champion Ursa Orehek with a total of 224 (+8). Orehek won the event with a three-round total of 222 (+6). The finish marks the second top-10 finish at an international amateur championship for Dreher this summer. She advanced to the final eight in match play before being eliminated at the Ladies‘ British Open Amateur Championship earlier in June.