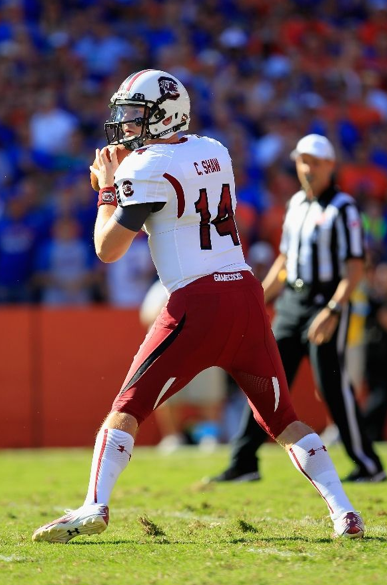 The No. 12/13 Gamecocks are continuing their preparations for Saturday’s non-conference matchup in Orlando with the UCF Knights. The game is set for 12:07 p.m. and will be televised nationally on ABC with Dave Pasch and Brian Griese in the booth and Tom Luginbill working the sidelines. The Gamecocks (2-1, 1-1 SEC) and Knights (3-0, 0-0 AAC) will play in front of a sold out Bright House Networks Stadium (45,323) on the UCF campus.

Senior quarterback Connor Shaw left the practice early on Wednesday to get some treatment for minor back spasms.

Offensive line coach Shawn Elliott was not willing to say who would start at center on Saturday. Cody Waldrop started the season opener but has not played since with a foot injury. Clayton Stadnik started each of the last two games and was named the SEC Offensive Lineman of the Week for his efforts in the win over Vanderbilt. “I don’t know that there could be a rotation,” said Elliott.  “Fortunately, we’ve got two good centers we can win with. Cody started today’s practice. We’ll see. You’ll find out Saturday (who starts).”

Mason Zandi has been working at both tackle and tight end over the last few weeks. “Mason is a big, strong athletic man who can play both. We needed some things done at that (tight end) position so we moved him in there and he did a good job. He’s an offensive tackle that can play tight end as well.”

“They’re a good team,” said Steve Spurrier Jr. of the Knights’ defense. “They play fast, they’re physical. They get after it. They played an awfully good game against Penn State. So we’ve got to be ready to go play. They’re fundamentally very sound. They play a little bit of everything. We’re expecting a good mix of coverages.”

The Gamecocks are scheduled to practice again on Thursday afternoon.