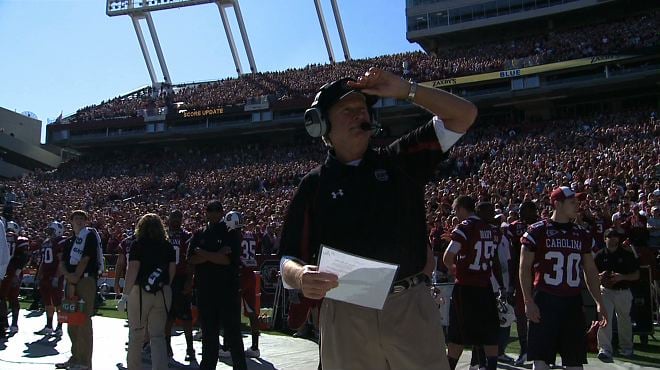 COLUMBIA, S.C. (USC SID) – With the temperature dropping steadily, the No. 11/12 South Carolina football team worked out at the Bluff Road practice fields on Tuesday afternoon. The Gamecocks (7-2, 5-2 SEC) are preparing for Saturday’s SEC Eastern Division showdown with the Florida Gators (4-5, 3-4 SEC).

Chaz Elder is another secondary player who has seen his playing time increase over recent weeks. “We just like the guys that make tackles and make plays,” noted Brown. “He’s a tall guy that is athletic and he does not shy away from contact. When he’s gotten in there, he’s done a fairly good job of being active and playing fast and making plays. That’s what it’s about for us. Some guys just have it in them where they don’t shy away from contact and he’s one of those guys.”

In other news, special teams performer Sidney Rhodes was one of 53 nominations for the 2013 Burlsworth Trophy, presented by the Springdale (Ark.) Rotary Club. The Burlsworth Trophy is given to the most outstanding collegiate football player who began his career as a walk-on. A walk-on is defined as a player who began his first season of participation with a Division I (FBS) football program without financial aid of any kind from his university’s athletic department.

The Gamecocks will return to the practice fields on Wednesday afternoon.

Saturday’s game at a sold out Williams-Brice Stadium (80,250) is scheduled for 7 p.m. ET. ESPN2 will have the national television broadcast with Joe Tessitore and Matt Millen in the booth and Maria Taylor working the sidelines.

Tips to help raise your kids to becomes healthy eaters

Local Living: Cola Concert Series returns this summer, get ready for the Battle of the Badges Blood Drive and more!