Bradley To Start Season In Minors 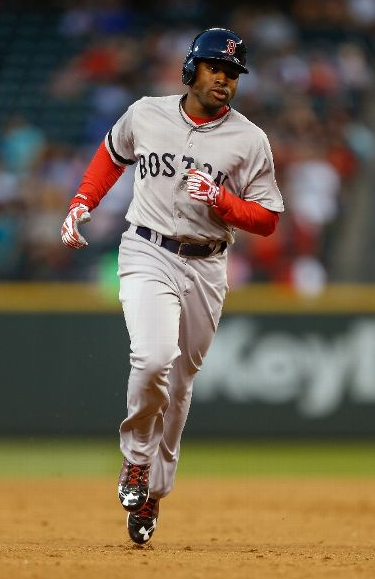 FORT MYERS, FL (AP) — Grady Sizemore’s long journey back from a series of injuries that almost ended his promising career is complete: He will be the Boston Red Sox’s starting center fielder on opening day.

The three-time All-Star is set to play for the World Series champions Monday at Baltimore.

“It’s very exciting,” Sizemore said Friday. “It’s been a long road for me and I’m happy to keep moving forward and to be in this position for this team.”

Sizemore has not played in the majors since September 2011 with Cleveland. He has undergone seven operations since 2009, including surgery on both knees, his back and elbow.

The Red Sox lost star center fielder Jacoby Ellsbury to the Yankees in free agency during the offseason. Boston signed the 31-year-old Sizemore in January, hoping he could still make an impact.

Sizemore hit .333 in spring training, going 13 for 39 with a home run, two doubles, three walks, and four strikeouts. He held up well in the outfield, playing 82 innings.

“This is one of those situations where the game was taken away from a player and now that it’s back in his reach, that appreciation is only going to grow,” Farrell said. “There’s a greater appreciation that I think any player goes through when they’re able to attain that level again.

“He hasn’t had any push back with the repetition and the volume in spring training, saying his body can’t take it,” Farrell added. “We have had a cautious level of optimism with each passing day.”

Entering spring training, the Red Sox were not sure what to expect from Sizemore. But he’s passed every marker. What’s left is to see how he holds up during the rigors of a full season.

Sizemore was a third-round pick of the Montreal Expos in 2000 before being acquired in a six-player deal by Cleveland in 2002 when Farrell was the Indians’ director of player development.

Before his injuries, Sizemore was one of baseball’s most dynamic players. A left-handed batter, he hit 20 or more home runs with 20 or more stolen bases in each of his first four full seasons, from 2005-08, the most 20-20 seasons in Indians history. The only other players ever to record three 20-20 seasons within their first four big league seasons are Darryl Strawberry (1984-86) and Bobby Bonds (1969-71).

Despite his time away from the game, Sizemore never gave up on his baseball career, though.

“I didn’t think it was over,” he said. “I just didn’t know if I’d ever get back to feeling healthy. It wasn’t really a matter of playing baseball. It was the little things like being able to run. It was one of those things where you’re just trying to find answers.”

But, on Monday, expect that to change.

“It’s nice to have some positive news,” Sizemore said. “In the last couple of years everything’s been so negative. It’s almost hard to realize what’s going on. Hard to sink in.”