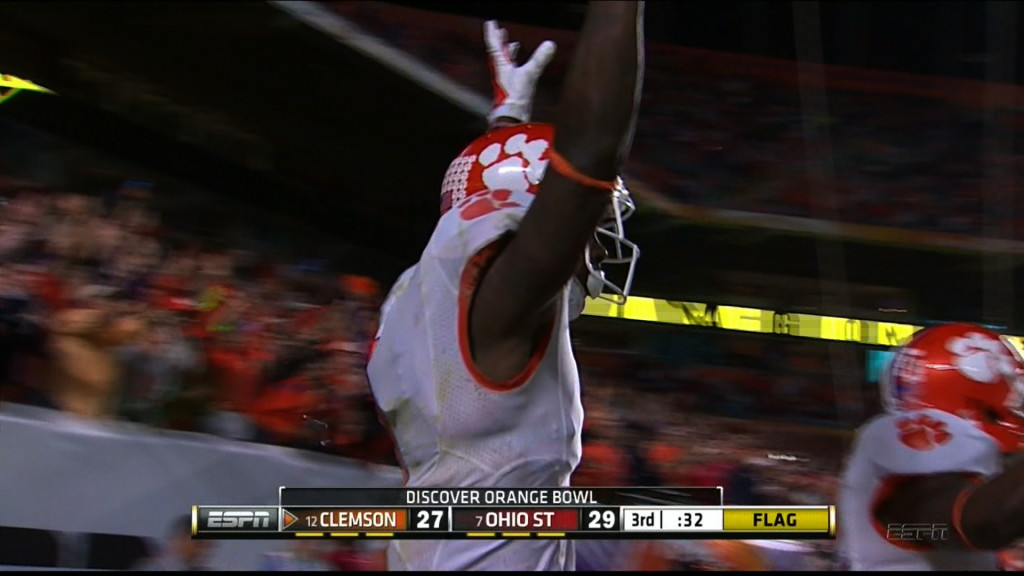 PITTSBURGH (AP) — Pittsburgh Steelers quarterback Ben Roethlisberger can finally look one of his receivers in the eye. Well, almost. The Steelers took 6-foot-4 Martavis Bryant of Clemson in the fourth round of the NFL draft on Saturday, giving the 6-5 Roethlisberger the big red zone target the team has long coveted. “We needed a guy different from what we have,” wide receivers coach Richard Mann said. Bryant caught 42 passes for 828 yards and seven touchdowns for the Tigers last fall while playing alongside star Sammy Watkins. While he creates matchup problems near the end zone, Bryant isn’t exactly a red zone specialist. He averaged nearly 20 yards per catch last season. Given Roethlisberger’s penchant for extending plays and testing the limits of his arm, Bryant doesn’t see why he can’t come in and make an immediate impact. “I know that Big Ben knows how to get the ball down the field and they’ve had some great wide receivers over the years,” Bryant said. “He loves throwing the ball deep and I just want to come and help.” The Steelers need help at receiver after Emmanuel Sanders and Jerricho Cotchery — the closest thing they had to a red zone target — left via free agency. Pittsburgh signed former New Orleans slot receiver Lance Moore and former Oakland first-round pick Darrius Heyward-Bey to offset the losses but neither are considered long-term solutions. Mann believes Bryant could be a starter in the NFL, perhaps sooner rather than later. The team hasn’t had a true “big” receiver since Plaxico Burress left for the New York Giants in 2005. Antonio Brown made the Pro Bowl last season and set a team record for yards receiving in a season with 1,499 but at 5-10 isn’t the type to go up and get it. That won’t be a problem for Bryant. “With the reach that he has, the arms, and the wingspan, I feel like we can get some cheap touchdowns down there,” Mann said. “He’s not afraid.” Pittsburgh grabbed Bryant one round after taking undersized running back/wide receiver/kick returner Dri Archer. Mann sees the 5-8 Archer spending time at wide out in certain packages. “I can visualize us ‘jerry-rigging’ stuff for him, the things he can do well and not just put him in every down,” Mann said. The Steelers entered the draft with a glaring need at wide receiver and defensive back but waited until the final day to bolster either position. Pittsburgh selected former Arizona defensive back Shaquille Richardson with their first pick in the fifth round then took Vanderbilt offensive lineman Wesley Johnson with a compensatory selection. Richardson collected 10 interceptions during his collegiate career, one that began at UCLA. He was actually recruited by current Steelers secondary coach Carnell Lake, who was a coach with the Bruins at the time. Richardson never played a down for UCLA, getting kicked off the team after being charged with stealing a purse before school started. The charges were dropped and he ended up in Arizona, where he used his 6-foot frame to challenge opposing receivers. “He has some height, he has some size to him and he has some coverage ability,” Lake said. Like Richardson, Johnson is expected to provide depth. He started more than 50 games in Southeastern Conference play for the Commodores, with the starts spread out between all three line positions. The Steelers coveted Johnson’s versatility. Pittsburgh’s offensive line has spent most of the last few seasons dealing with injuries that have forced them to get creative with their combinations. That’s fine by Johnson, who says he’s most comfortable at tackle but is only too happy to go in whatever direction helps the team.