Watson off to Fast Start 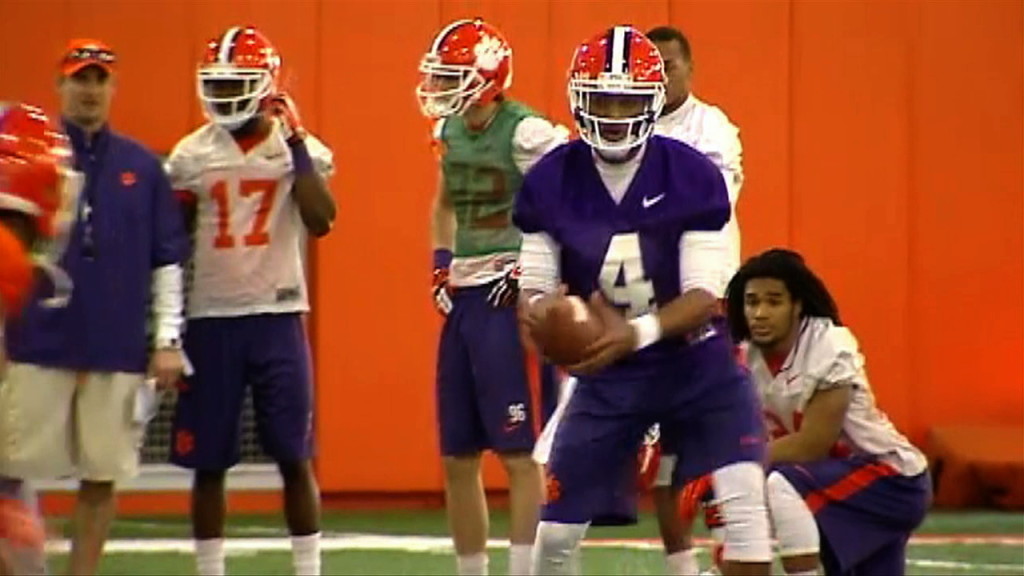 CLEMSON, S.C. (AP) — Deshaun Watson is more concerned about building on his successful start at Clemson rather than celebrating what he accomplished. The freshman quarterback passed for a school record six touchdowns and 435 yards passing — the second best total in Tigers’ history — to defeat North Carolina 50-35 last week. He’s been stopped frequently for pictures and congratulations ever since, yet would rather focus on taking the next step forward before Clemson (2-2, 1-1 Atlantic Coast Conference) plays North Carolina State (4-1, 0-1) Saturday. “We can do a lot more than what we did” against the Tar Heels, Watson said this week. That’s hard to fathom for anyone who watched Watson run Clemson’s fast-paced attack. Watson had TD passes of 74, 50, 24, 33 and 33 before ending his barrage with a 5-yard scoring pass in the final period. He completed 27 of 36 throws with one interception. The performance earned the 19-year-old several national honors, including the Davey O’Brien Award’s national quarterback of the week. He was the ACC’s rookie of the week and shared offensive honors with North Carolina State quarterback Jacoby Brissett, who Watson will square off against at Death Valley this weekend. More than the arm strength and accuracy was Watson’s poise, something Clemson coach Dabo Swinney found rare in a teenager leading a major college team at its most important position. “I’ve never been around a freshman like him,” Swinney said Tuesday. Neither had most of Clemson’s players. Senior safety Robert Smith recalls when he arrived on campus in summer 2011 before his freshman year, the high-school quarterback watched prep passers at Clemson’s yearly camp and noticed a gangly quarterback who was prepping for his sophomore season at Gainesville High in Georgia. Smith, a quarterback in high school too, said Watson instantly stood out. “There’s no way,” Smith remembered telling teammates, “this guy’s not going to get offered. I didn’t know who he was. Everything after that is just history.” Or at least history in the making. A crack in his collarbone in the spring kept Watson from playing in the Orange-and-White game last April as senior Cole Stoudt was named starting quarterback. Watson played as backup in a loss at Georgia and a victory over South Carolina State the first two weeks. Watson entered on Clemson’s fourth series at Florida State and stood strong in the face of the Seminoles’ fierce defense. Swinney kept looking for evidence of freshman errors with Watson and didn’t find that many. Clemson’s seventh-year coach said Watson combines a strong work ethic, talent and an ability to accept coaching that’s unique in young players. “He’s just a very serious person about what he’s doing,” Swinney said. “Very purposeful. He just has a different presence.” North Carolina State coach Dave Doeren said preparing for Watson will be similar to the dual threat posed by Clemson’s previous quarterback in Tajh Boyd. “Tajh was a guy that could throw it down the field and he could run,” Doeren said. “We know what this guy (Watson) was like in high school. He was the no. 1 spread quarterback in the nation coming out. We know he has legs.” Not everything went perfectly for Watson, Swinney said. Watson had three or four errors where he put the Tigers in a bad spot, the coach said. “There’s also some plays on there you just go, ‘Wow,'” Swinney said. “He just makes us look good.” Watson is grateful for the praise, just not yet ready to fully embrace it with so much left to achieve. He wants to add about 15 pounds to his 6-foot-2, 205-pound frame so he better handles the hits he’ll take as he runs the football more frequently. While he’s comfortable guiding the offense, Watson understands he’s still gaining the trust of coordinator Chad Morris. That won’t be an issue if Watson keeps playing like he has so far. “What I’m most proud of is getting that win, especially my first win as a starter and just keep on continuing to get better every week,” Watson said.