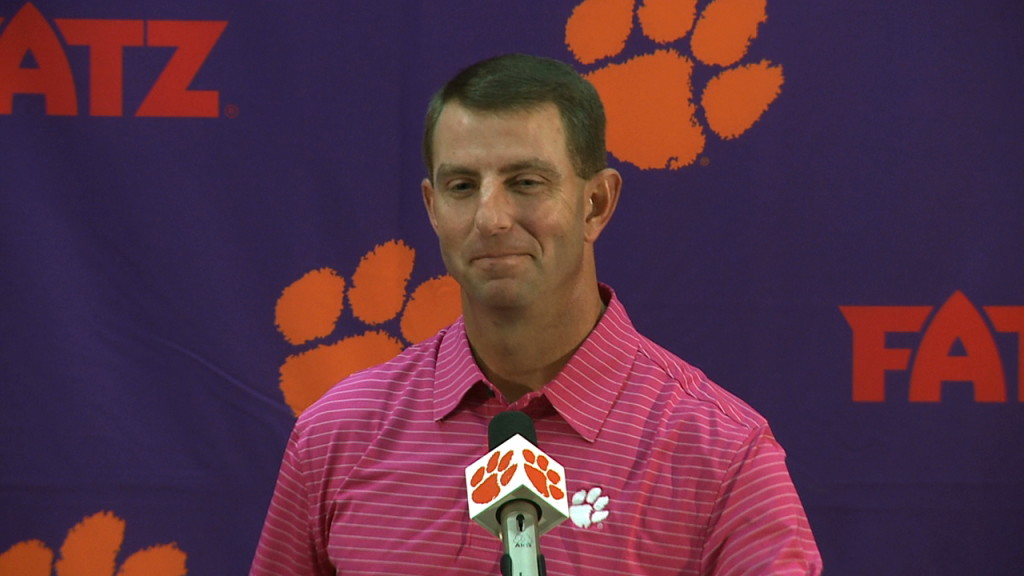 CLEMSON, S.C. (AP) — Clemson coach Dabo Swinney still believes he made the correct decision coming out of fall camp: Deshaun Watson was the team’s backup quarterback. That hasn’t stop people asking if the freshman might’ve prevented the team’s rough start had he opened behind center from game one. “I don’t sit around and play hypotheticals or ‘What ifs’ or whatever,” Swinney said Tuesday. “I’m just worried about that windshield and what’s in front.” Watson has helped the Tigers (3-2, 2-1 Atlantic Coast Conference) turn things around since supplanting senior Cole Stoudt as starter early in a loss at top-ranked Florida State three weeks ago. He has accounted for 1,088 yards and 11 touchdowns the past three games, earning three straight ACC rookie of the week honors. With Watson leading the way, the Tigers have won two in a row after their first 1-2 start in 10 years. Clemson goes for its third straight Saturday against ACC newcomer Louisville (5-1, 3-1) at Death Valley. Swinney has heard often from fans and outsiders wondering if those early defeats at Georgia and Florida State could’ve been avoided had Watson gotten the call earlier. He flatly said Stoudt won the job and was Clemson’s best chance at success against the Bulldogs and Seminoles. But now that Watson is getting his chance, he’s making the most of the opportunity. Watson enrolled in January after tallying a Georgia prep record of 17,134 yards and 218 touchdowns at Gainesville High. A collarbone injury late in spring practice kept him out of the spring game while Stoudt, Clemson’s backup to Tajh Boyd the previous three years, was cementing his hold on the starting the job. That order continued into fall camp, although both Swinney and offensive coordinator Chad Morris said Watson would see time in every game. Watson showed his talent quickly, throwing a TD pass against Georgia in his first college series although the Tigers lost 45-21. Watson had three of Clemson’s four scoring passes in a 73-7 blowout of FCS opponent South Carolina State a week later. At Tallahassee, Florida, Watson entered on Clemson’s fourth series with the Tigers down 3-0 and played the reset of the way. He rushed for a 2-yard touchdown as Clemson led 17-10 in the fourth quarter before Florida State rallied in overtime for the 23-17 victory. In Clemson’s postgame, Swinney said Watson would keep the starting job. And Watson has not disappointed since. He had a school record six touchdown passes and 435 yards — the second best total in Clemson history — in the 50-35 win over North Carolina two weeks ago. Watson led the Tigers to a 21-0 lead in the opening quarter last Saturday against North Carolina State on the way to a 41-0 win. Watson’s signature moment so far was on a 5-yard scoring run when he cleanly hurdled a Wolfpack defender on the way to the end zone. He’s played so well the countdown is on about him leaving for the NFL after his junior year in 2016. “Gosh, let him a win a few games first,” Swinney said. “He hasn’t even passed freshman biology.” Louisville coach Bobby Petrino said Watson has a first-class arm and that makes Clemson’s offense go. “He can really wing it deep. That’s the thing that you see that jumps out at you on the video, how they throw the ball down the field,” he said. It’s been a heady time for Watson, who said he understands how quickly the adulation of winning can fade away with losses. Watson said coaches have kept him focused on improving play by play and practice by practice. “The hype is something that’s fake,” he said. “One bad game and the hype can go down. So I don’t pay too much attention to all that.” Swinney seems more impressed by the 19-year-old’s maturity and polish as his football abilities. “He’s not one of those guys that sit around the apartment playing video games,” the coach said. “When he’s in the apartment, he’s drawing up plays.” Swinney’s biggest issue with Watson thus far? “I’d like for him not to hurdle people,” he said. For Watson, it was just part of a successful play — something he’s done quite well for the Tigers. “I’m having a blast, man,” the freshman said.