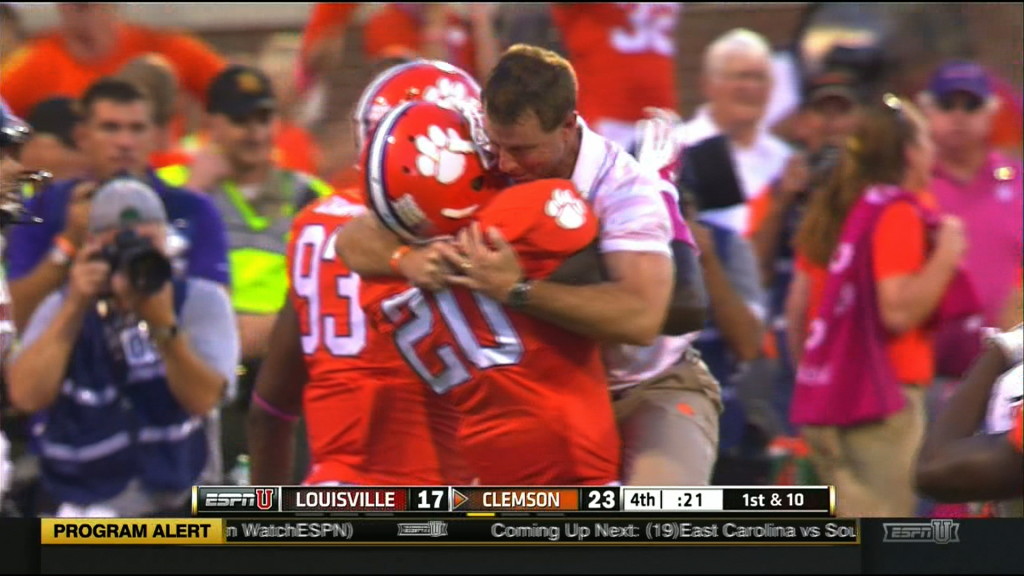 CLEMSON, S.C. (AP) — Ammon Lakip bounced through the go-ahead, 40-yard field goal and Clemson stopped Louisville on fourth-and-goal from its 2 with 21 seconds remaining for a 23-17 victory Saturday. The Tigers (4-2, 3-1 Atlantic Coast Conference) held on despite losing freshman phenom quarterback Deshaun Watson to injury in the second quarter. But it took a dramatic late stop to do it after Will Gardner’s 73-yard pass to James Quick put the Cardinals (5-2, 3-2) on Clemson’s 8 with 1:08 left. Gardner was forced to spike the ball on third down to stop the clock at the Tigers 2 on third down. After rolling right on the final play, defensive tackle DeShawn Williams batted away the pass. Clemson’s Cole Stoudt ran a final play from the 1 and Tigers fans filled the field in celebration. Clemson got a 72-yard punt return TD from Adam Humphries and a 2-yard fumble return score by Tavaris Barnes to win its third straight game — and overcome a poor offensive showing against Louisville’s No. 1 rated defense. The Tigers finished with 229 yards, 261 yards fewer than their ACC-leading average coming in. Gardner came in in the second half after a poor start by Reggie Bonnafon and nearly rallied the Cardinals to victory. He finished 10 of 16 for 150 yards and a 22-yard TD pass to Eli Rogers that tied things at 17-all in the third quarter. Clemson and five-star freshman Watson had hoped to keep the momentum going from two consecutive victories over North Carolina and North Carolina State to rebound from the team’s first 1-2 start in 10 years. Humphries punt return was Clemson’s first such score since ACC player of the year C.J. Spiller did it against Boston College in 2009. That’s when Louisville’s defense, the country’s top-ranked unit, showed its teeth. It forced a pair of three-and-outs and picked off Watson — the Cardinals’ leading 13th this season — deep in Clemson territory. After the Tigers held Louisville to a field goal, the air came out of jam-packed Death Valley when Watson hit his right, throwing hand against an opposing helmet on a 9-yard run and came to the sidelines holding it. Watson was soon off to the locker room and Clemson announced he would not return with a broken hand, yielding the offense to senior Cole Stoudt. Louisville coach Bobby Petrino wrankled some Clemson fans with his comments early this week he didn’t expect Death Valley to be much louder than Syracuse’s Carrier Dome was last game — despite the fact Clemson would have more than twice the crowd. But the noise drained from the arena after Watson’s departure. Stoudt, the backup to record-setting Tajh Boyd the previous three seasons, had started Clemson’s first three games before Watson took over early in a 23-17 overtime loss at Florida State. Stoudt was rattled by the Cardinals’ pass rush and struggled to move the team. Clemson finished the half with 70 yards and squandered its best chance at an offensive touchdown when Stoudt was stopped short on the Louisville 1 and could not get the clock stopped before the half ran out. Clemson senior defensive end Vic Beasley picked up one of three sacks against Bonnafon, giving him a school record 29 for his career and moving past former NFL standouts Michael Dean Perry and the late Gaines Adams.