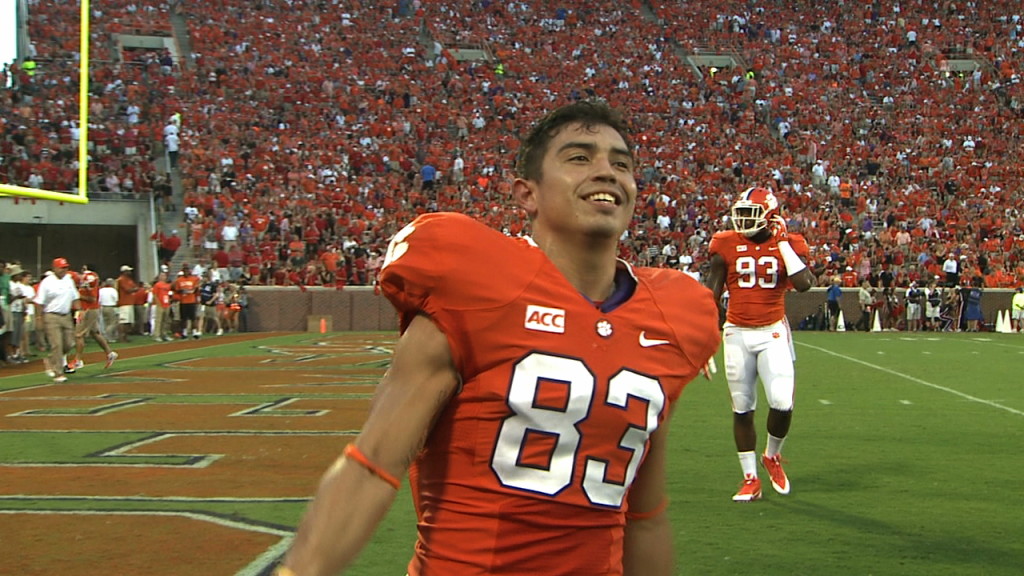 CLEMSON, S.C. (CU SID) — Daniel Rodriguez, a senior wide receiver and special-teams player at Clemson, is the third recipient of the Armed Forces Merit Award, presented by the Football Writers Association of America (FWAA). Coordinated by the staff at the Lockheed Martin Armed Forces Bowl, the Armed Forces Merit Award presented by the FWAA was created in June 2012 “to honor an individual and/or a group with a military background and/or involvement that has an impact within the realm of college football.” Selected by a seven-person committee made up of representatives from the FWAA and the Lockheed Martin Armed Forces Bowl, Rodriguez joins Nate Boyer of Texas and Brandon McCoy of the North Texas as recipients of the Armed Forces Merit Award presented by the FWAA. Boyer, who is completing his third season as the long snapper for the Longhorns, was honored in 2012, while McCoy was the 2013 recipient during his fourth and final season as a defensive lineman for the Mean Green. Rodriguez was an Armed Forces Merit Award semifinalist both years while playing at Clemson, where he was the 2012 recipient of the Orange Bowl-FWAA Courage and USAA Athletic Inspiration Awards while being an ESPY finalist for the Jim Valvano Perseverance Award. Attending college on the GI Bill, Rodriguez was offered a spot on the 2012 Clemson team as a walk-on after Head Coach Dabo Swinney saw a video about the former U.S. Army Sergeant and recipient of the Purple Heart and Bronze Star Medal with Valor Device for his heroism at Kamdesh in Afghanistan. “On this very special day, Veterans‘ Day 2014, we are pleased to join with the Football Writers Association of America to honor Daniel Rodriguez from Clemson University as the third recipient of the Armed Forces Merit Award,” said Brant Ringler, executive director of the Bell Helicopter Armed Forces Bowl. “We had list of outstanding nominations for this year‘s award and it is difficult to honor only one each year when we have men and programs that are very deserving of the honor.” Kirk Bohls, the FWAA‘s President and a columnist for the Austin American-Statesman, echoed Ringler‘s sentiments along with adding that the FWAA is “pleased to team with the Lockheed Martin Armed Forces Bowl to recognize Rodriguez‘s achievement as a veteran who used his armed forces experiences to benefit his teammates and coaches at Clemson University. The FWAA also salutes the other 2014 nominations for their contributions on and off the field of play.” Since starting his Clemson career in 2012, Rodriguez has played in 35-straight games for the Tigers, as the school has a 29-6 record with bowl wins over Louisiana State (Chick-fil-A) and Ohio State (Orange). He has 10 receptions during his career with one touchdown in a 2013 Tiger win over The Citadel on Military Appreciation Day. Rodriguez will graduate next month from Clemson with a degree in parks, recreation & tourism management. While serving in the Army (2006-10), Rodriguez served approximately 18 months in Iraq and one year in Afghanistan. He was involved in the Battle of Kamdesh in Afghanistan on Oct. 3, 2009 when 300 Taliban insurgents battled with 38 U.S. troops (eight Americans lost their lives and 22 were injured, including Rodriguez). Swinney believes Rodriguez’s “presence has helped the team, and he never forces his leadership. It has really made the team appreciate our military and realize that there are a lot more problems in the world than our third-down conversion rate.” Sammy Watkins, Clemson‘s all-time receiving leader and the fourth overall pick in the 2014 NFL draft, spoke highly of Rodriguez, as the two were playing together during the 2012 and 2013 seasons. “I loved having him on our team,” said Watkins about Rodriguez. “He’s a motivator and he brings fire to our team. Daniel’s hyped up every day, hyped up just to be living. We know what he’s been through. I like the way he comes in every day and goes to work, just like everybody else. He practices hard, he plays hard.” Tajh Boyd, the Tigers‘ all-time leader in passing yards and touchdowns before becoming a sixth-round pick in the 2014 NFL draft, said that “when you come to Clemson, you learn about the military heritage and history, but when you’ve got a guy like Daniel on your team, it changes your whole perspective. It’s exciting to have him on our team.”