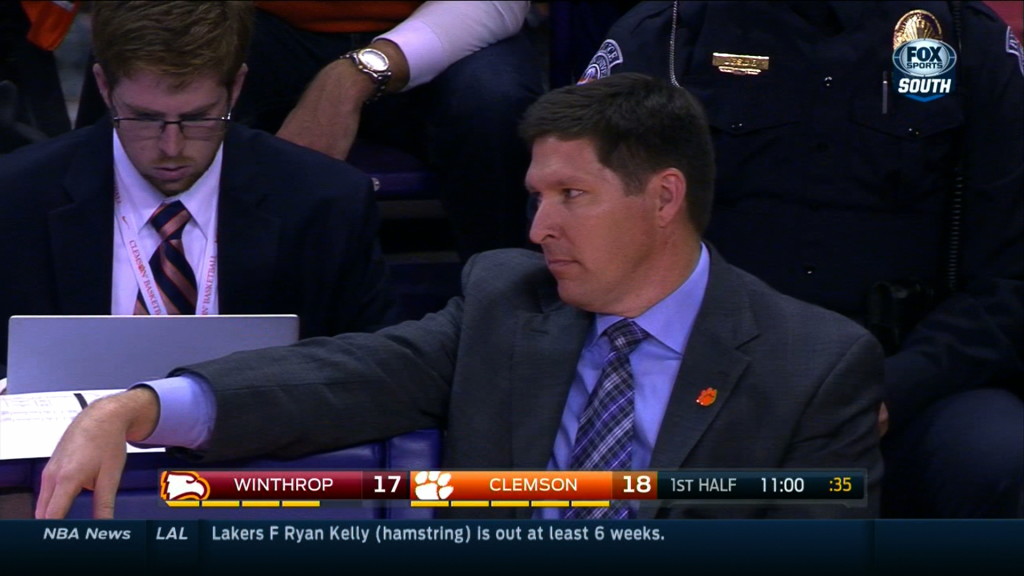 CLEMSON, S.C. (CU SID) — Clutch shooting from the free throw line and three-point line propelled Winthrop to a 77-74 victory over Clemson in Littlejohn Coliseum on Monday. The Tigers struggled in both areas, conversely, and fell to 1-1 on the season. The Eagles moved to 2-0 on the young season. Winthrop shot just 39 percent overall but made 9-of-23 (.391) from three and 20-of-25 (.800) free throws. The Tigers shot just 3-of-13 (.231) from three and 23-of-39 (.590) at the charity stripe. Clemson shot 48 percent overall and dominated the glass, 46-29, but suffered a negative assist-to-turnover ratio (8-to-16). Landry Nnoko led the Tigers again with a career-high 19 points. He made 6-of-9 field goals and 7-of-10 at the foul line. Donte Grantham posted 13 points, while Jaron Blossomgame (12) and Rod Hall (11) also added double figures. Keon Johnson (19) and Keon Moore (16) led the Eagles. A back and forth affair in the opening half, Winthrop led 22-21 before the Tigers clamped down on defense. The Eagles started 7-of-14 from the floor in the opening frame, but finished with just four makes on their last 17 shots. Unfortunately for Clemson, one was a long three as the buzzer sounded to pull Winthrop within two at 36-34. The Eagles led for much of the second half, and their advantage reached 63-56 after two three-pointers in a three-possession span. Grantham answered with a three from the top and added a free throw, but Johnson again answered with a contested trifecta to keep Clemson at bay. With Winthrop up one just one, the Tigers were guilty of an intentional foul and the Eagles converted three of four at the line to make it 73-69 inside the final 35 seconds. But Hall answered with a big three to trim it to one. Winthrop calmly salted the game away in the final seconds at the stripe to escape with its second victory over the Tigers in the series history. The Tigers embark on the U.S. Virgin Islands for the Paradise Jam this week. Clemson will face Gardner-Webb in the first round on Friday, Nov. 21 at 1:30 p.m. ET.