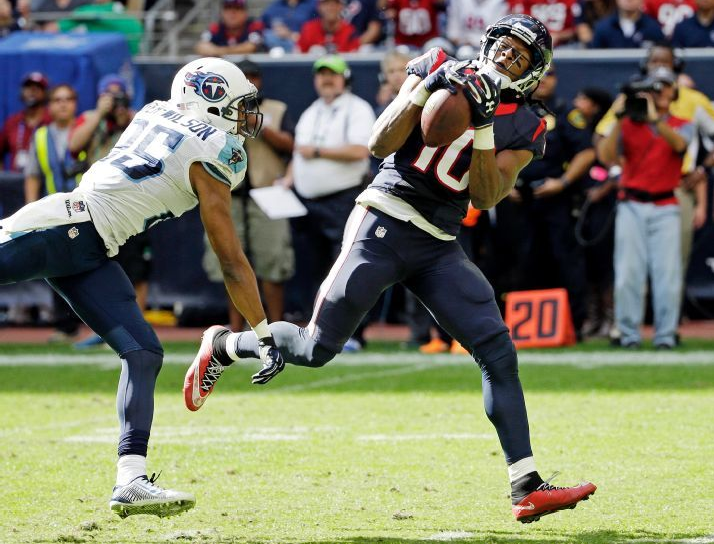 HOUSTON (AP) — Ryan Fitzpatrick made the most of his second chance and J.J. Watt continued to make a case for MVP. Fitzpatrick threw for a franchise-record six touchdowns and former Clemson standout DeAndre Hopkins had a career-best 238 yards receiving and two scores as the Houston Texans set a team-record for points, rolling to a 45-21 win over the Tennessee Titans on Sunday. A third-quarter false start by Andy Levitre was among the plays that summed up the Titans’ Week 13 loss — and their dreadful season. Story Watt had his third touchdown reception, two sacks, forced and recovered a fumble for Houston (6-6) and enhanced his shot to become the first defensive MVP since Lawrence Taylor in 1986. So does he think he should be in the conversation for the award? “All I can do is play as hard as I can play, make as many plays as I can make and try to help my team win football games,” he said. Fitzpatrick started after being benched for two games for Ryan Mallett, who suffered a season-ending chest injury last week. “I didn’t know if I’d ever have a chance to play again,” Fitzpatrick said. “It was eye-opening for me not to take it for granted and to embrace it.” Tennessee’s Zach Mettenberger injured his right shoulder playing behind a makeshift offensive line missing three starters. He said he has a sprain and thinks he’ll be able to play next week, but that he’ll have an MRI on Monday. “Our win-loss (record) is not reflective of how mentally tough we are or how hard we work,” Mettenberger said. “We just make dumb mistakes that keep putting us deeper and deeper in a hole.” Jake Locker took over in the third quarter and threw for 91 yards with a touchdown and two interceptions for the Titans (2-10), who have lost six straight. Fitzpatrick passed for 358 yards and came up one short of tying the NFL record by throwing touchdown passes of 8, 7, 58, 34, 4 yards to his receivers before ending his day with a 1-yard TD toss to Watt. It came on the drive after Watt’s forced fumble and elicited chants of “MVP” from the crowd. Watt has 11 1/2 sacks and five touchdowns to make him the first player to have at least 10 sacks and three or more touchdowns in a season since 1982, when sacks became an official statistic. “I don’t think I could have imagined … scoring one touchdown anywhere,” he said. “Five right now is very cool.” Hopkins was asked why he thinks Watt’s a better choice for MVP than someone like Green Bay quarterback Aaron Rodgers. “Aaron Rodgers doesn’t sack quarterbacks and catch touchdowns,” Hopkins said. “(Watt’s) multitalented. When’s the last time you’ve seen a defensive end with this many touchdowns and be able to make the catches he’s made?” The Titans were missing rookie left tackle Taylor Lewan (ankle), center Brian Schwenke (knee), who was placed on the injured reserve Tuesday, and right tackle Michael Oher (toe), who was active but did not play. Mettenberger found Kendall Wright on a 36-yard pass early in the third quarter to cut the lead to 24-7. Mettenberger said he wouldn’t dare take a fake selfie as a celebration after Watt mocked him with one after a sack in his last game against Houston; Watt was irked that the rookie had been posting them all week. But Wright apparently didn’t feel the same way and pantomimed one after his score. Mettenberger was injured on the next series when driven to the ground by Watt. He had 184 yards passing with a touchdown and an interception. Locker was intercepted by Jumal Rolle on his first play. That didn’t matter much as Jason McCourty caused a fumble, recovered it and raced 62 yards for a touchdown to get Tennessee within 24-14. Hopkins caught a 58-yard touchdown pass to extend Houston’s lead to 24-0 at halftime. The second score by Hopkins made it 31-14 later in the third quarter. Andre Johnson had a nifty catch in the end zone to extend Houston’s lead to 38-14. An interception by Johnathan Joseph on Tennessee’s first offensive play set up a 7-yard catch by Arian Foster, who returned after missing two games with a groin injury, and pushed Houston’s lead to 14-0. Game notes Joseph injured his Achilles tendon in the third quarter and didn’t return, but said after the game that he was OK. … The Titans said that WR Justin Hunter has a lacerated spleen and will spend the night in a Houston hospital.