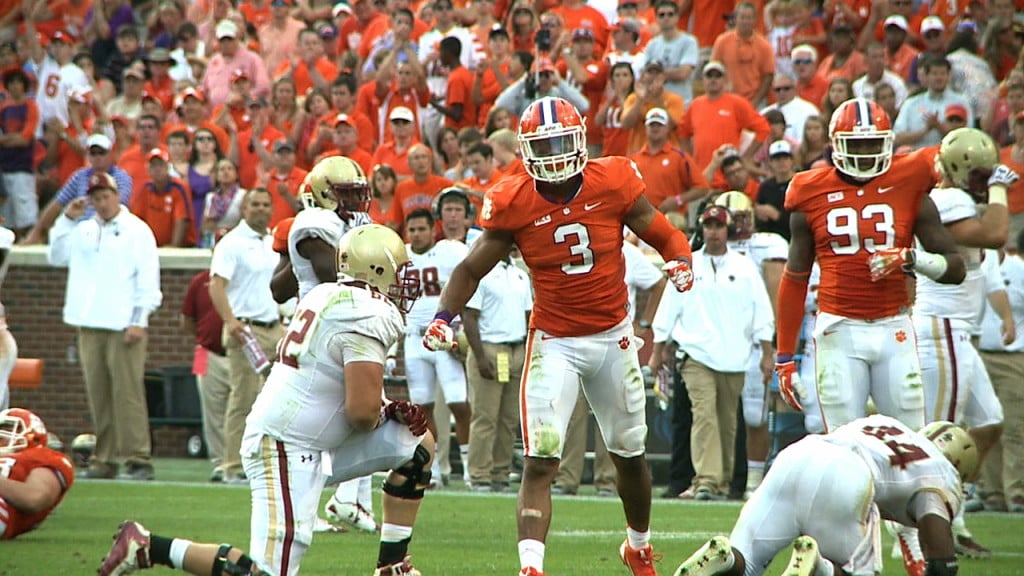 Clemson, S.C. (Clemson SID) — Clemson defensive end Vic Beasley has been named one of six finalists for the Ted Hendricks Award. The honor is presented each year to the top defensive end in the nation and is given in honor of former Miami (FL) and Baltimore Colt All-Pro defensive end Ted Hendricks. The finalists for the 2014 award are Beasley, Joey Bosa of Ohio State, Hau‘oli Kikaha of Washington, Nate Orchard of Utah, Shane Ray of Missouri and Leonard Williams of Southern Cal. Beasley was also a finalist in 2013. This is the fourth time in the last five years Clemson has had a finalist for the Hendricks Award. Da‘Quan Bowers won the honor in 2010. Andre Branch was a finalist in 2011, while Beasley has been a finalist in 2013 and 2014. Beasley leads the ACC in quarterback sacks with 11 as Clemson (9-3) prepares for its bowl game. The native of Adairsville, Ga. also has 18.5 total tackles for loss this year to lead the conference. He ranks 10th in the nation in both categories this year. He was named the ACC Defensive Player of the Week against South Carolina last week when he had two sacks, three tackles for loss and six total tackles in Clemson‘s 35-17 victory. Beasley is a major reason Clemson leads the nation in total defense and tackles for loss, and ranks in the top 10 in pass defense, rushing defense and scoring defense. The 6-foot-3, 235-pound Clemson graduate, holds the Clemson school record and leads all active FBS players with 32 career sacks. Beasley‘s 49.5 career tackles for loss have accounted for 292 negative yards, 62 more yards than any other active FBS player. Earlier this week Beasley was named the ACC Defensive Player of the Year. He is also a finalist for the Lombardi Award and the Bednarik Award and was a first-team All-ACC selection.