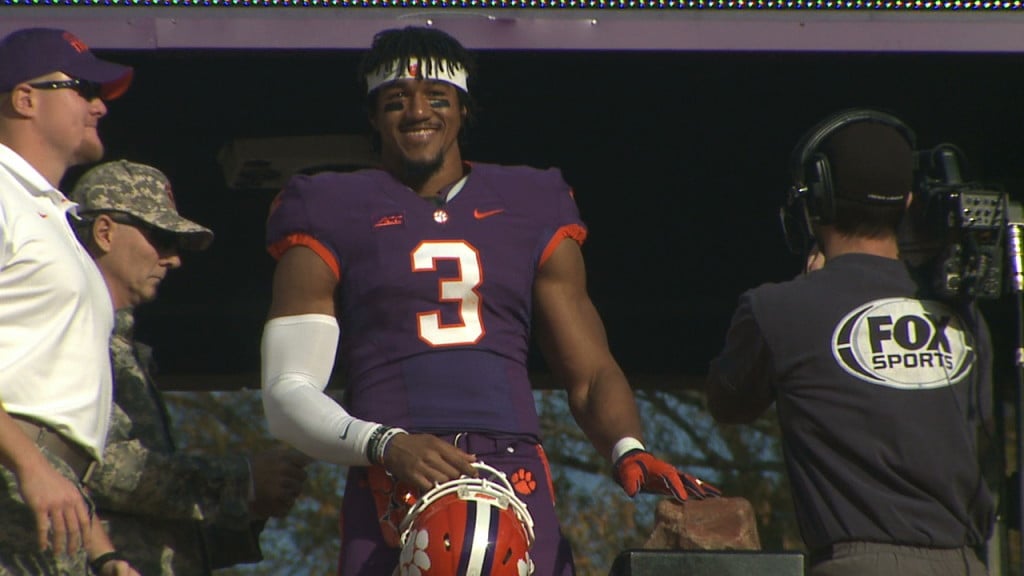 Clemson, S.C.—Clemson defensive players Vic Beasley, Grady Jarrett, Garry Peters and Stephone Anthony all were named first-team All-ACC by the ACC Football Coaches on Wednesday. Clemson had the most first-team players on the defensive side of the ball. Beasley was named ACC Defensive Player of the Year as well by the ACC Coaches. The Clemson graduate defensive end was named ACC Defensive Player of the Year last week by the ACC Sports Media and is a finalist for the Lombardi Award, the Bednarik Award and the Hendricks Award. All will be announced this week. Clemson receivers Artavis Scott and Mike Williams, were named third-team All-ACC by the coaches. Clemson offensive guard David Beasley, kicker Ammon Lakip, and defensive backs Robert Smith and MacKensie Alexander were honorable mention selections. Beasley, Jarrett, Peters and Anthony have been leaders of Clemson‘s number-one ranked defense all year. Beasley has 32 total tackles, including 11 sacks, 18.5 tackles for loss and two caused fumbles on sacks. He leads the ACC and ranks ninth in the nation in sacks and is seventh nationally in tackles for loss. Jarrett has been a big reason the Tigers are ranked in the top five in the nation in rushing defense. The senior has 69 tackles to lead Clemson defensive linemen. Anthony is Clemson‘s top tackler with 87 tackles and has 9.5 tackles for loss. Peters has been a most productive cornerback with a team best 13 passes defensed and has 51 tackles. He was Clemson‘s top tackler in the win over South Carolina. Scott and Williams are Clemson‘s top two receivers and both rank in the top five in the ACC in reception yardage. Scott has 68 receptions for 851 yards and seven scores. He had seven receptions for 185 yards and two scores in the win over South Carolina, the most receiving yards in Clemson history by a freshman and the most by any Clemson player against South Carolina. Williams has 48 receptions for a team best 918 yards and five touchdowns. His 19.1 yards per reception average is second best in the nation among players with at least 45 catches. He is fourth in Clemson history in that category on a career basis. Lakip ranks 12th in the nation in field goals per game by making 19-25 attempts and he is Clemson‘s top scorer with 96 points. David Beasley have been a senior leader and three year starter on Clemson‘s offense that has averaged 30 points and 410 yards per game. Smith is second on the team in tackles with 76, while Alexander has been an effective shutdown corner who is a big reason Clemson ranks fifth in the nation in pass efficiency defense.