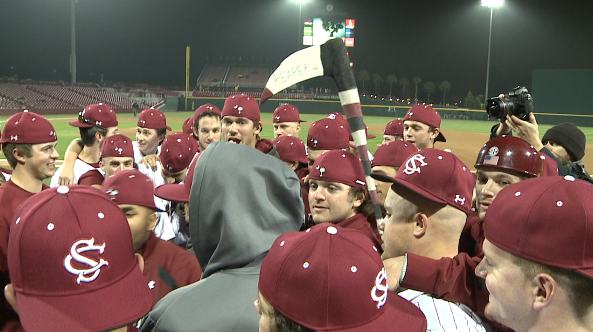 COLUMBIA, S.C. – Logan Koch belted a two-run homer and Wil Crowe, Vince Fiori and Taylor Widener combined for a five-hit shutout as fifth-ranked South Carolina defeated Miami (Ohio) 2-0 on Friday night at Carolina Stadium. The Gamecocks improve to 10-3 on the year while the loss drops the RedHawks to 2-6. After a one-out single from Jordan Gore in the bottom of the second, Koch sent a 0-1 pitch from Miami starter Ryan Powers over the wall in right field to put the Gamecocks ahead 2-0. Sophomore right-hander Wil Crowe earned the win and improves to 2-1 on the year. He hurled seven scoreless innings allowing five hits and three walks while striking out eight batters. Vince Fiori added 1.2 perfect innings of relief and struck out two batters. Taylor Widener picked up his fourth save of the season as he recorded a strikeout in 0.1 innings of work. GAME CHANGER Koch‘s two-run homer in the second inning gave the Gamecocks all the offense they needed. KEY STAT Crowe, Fiori and Widener limited Miami to just five hits. They struck out a combined 13 batters and walked only three. NOTABLES one space· Logan Koch hit his first career home run, recorded his first multi-hit game of the season and tied a career high of two hits in a game. one space· Gene Cone has reached base in all 13 games this season. QUOTABLE South Carolina Head Coach Chad Holbrook “It was a well played game, a great college baseball game. (Ryan) Powers and (Wil) Crowe were phenomenal, two big boys out there. Powers was good coming into the game. He was 9-3 a year ago with great numbers. I see why after watching him throw tonight. Wil was very effective and we played incredible defense behind Wil. (Vince) Fiori came in and was perfect and then Taylor (Widener) got the last out. We made some great plays defensively. The cut off relay play Jordan (Gore) threw home was just like we practiced it. Jordan made a great play on a one-hop line drive play. Fiori made a great play on a bunt that went probably unnoticed, I think that was a great play. Elliott (Caldwell) made a nice play in right field. We pitched and played defense today and that’s kind of what we talk about all the time. If you pitch and play defense you have a chance to win and that’s what we did. It was just a great college baseball game.” UP NEXT South Carolina and Miami (Ohio) face off at Carolina Stadium on Saturday with first pitch set for 4 p.m. The game will be broadcast on SEC Network Plus and can be heard on WISW-1320 AM “The Fan.”