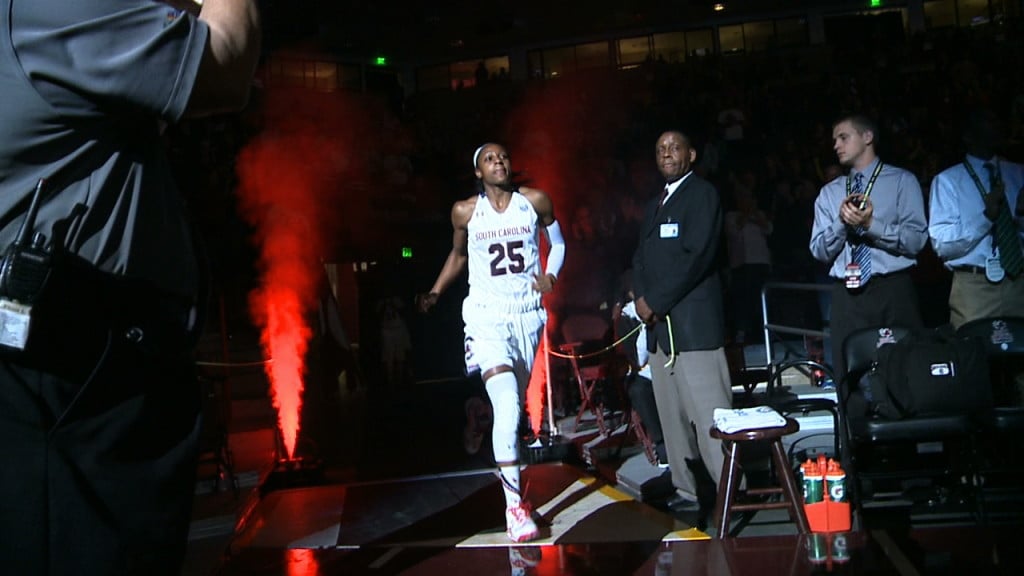 COLUMBIA, S.C. (USC SID) — South Carolina junior guard Tiffany Mitchell remains present in national player of the year conversations as one of 12 finalists for The Wade Trophy. The two-time SEC Player of the Year is a finalist for all three premier national player of the year awards as she is one of four still in the running for the Naismith Trophy and the Wooden Award. Additionally, Mitchell is one of four finalist for the Dawn Staley Award, recognizing the nation‘s top guard. The Gamecocks‘ leading scorer, Mitchell ranks third in the SEC in both field goal (.499) and free throw (.840) percentage and is among the league‘s top-10 scorers at 14.2 points per game. A versatile guard who can impact the game on both sides of the ball, she is one of two players this season to rank among the SEC‘s top 15 in scoring, assists (12th, 2.8 apg) and steals (10th, 1.9 spg). Mitchell has been the Gamecocks‘ leading scorer a team-high 15 times and has 27 double-figure scoring games. She has also led the team in assists 10 times. The Wade Trophy finalists were selected by a vote of committee members consisting of leading basketball coaches, journalists and administrators. The committee will select the winner of The Wade Trophy from the 12 finalists, announcing it during the WBCA Awards Show, which will be held at 5:30 p.m. on Mon., April 6, in the Grand Ballroom at the Tampa Marriott Waterside. South Carolina will play in its third NCAA Sweet 16 in the last four seasons on Fri., March 27, taking on No. 15/12 North Carolina at 7 p.m. in Greensboro. The game will air live nationally on ESPN. 2015 The Wade Trophy Finalists Brittany Boyd, California, Sr., G Nina Davis, Baylor, So., F Reshanda Gray, California, Sr., F Dearica Hamby, Wake Forest, Sr., F Brittany Hrynko, DePaul, Sr., G Jewell Loyd, Notre Dame, Jr., G Tiffany Mitchell, South Carolina, Jr., G Kaleena Mosqueda-Lewis, Connecticut, Sr., F Breanna Stewart, Connecticut, Sr., F Courtney Williams, South Florida, Jr., G Elizabeth Williams, Duke, Sr., C Amanda Zahui B., Minnesota, So., C