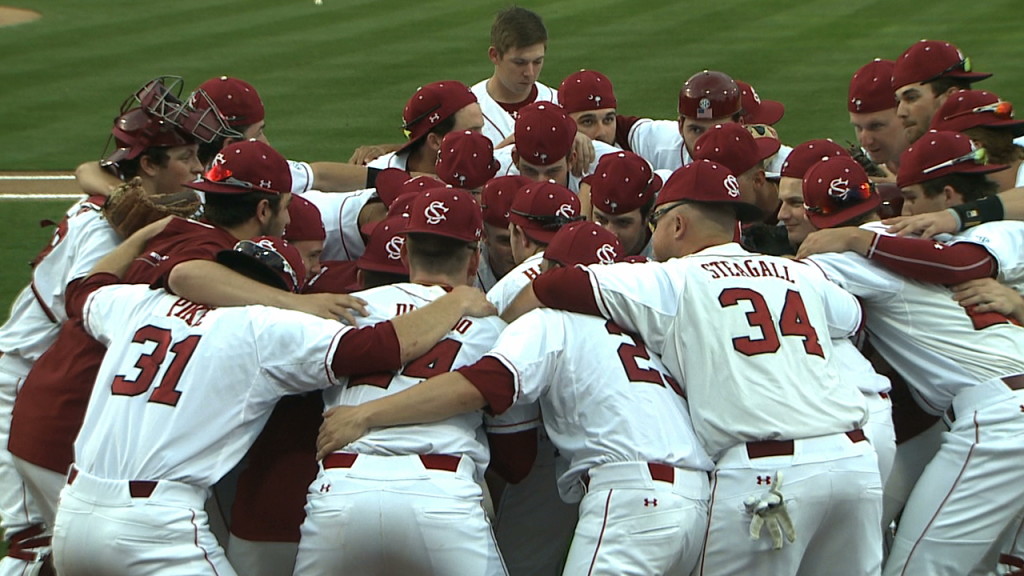 COLUMBIA, S.C. – Tied 4-4 in the bottom of the sixth, freshman Hunter Taylor belted his first career home run and Madison Stokes added a two run double in the bottom of the seventh as seventh-ranked South Carolina defeated Georgia 8-5 in the final game of a three-game series on Sunday afternoon at Carolina stadium. The Gamecocks improve to 19-9 and 5-4 in the SEC while the loss drops the Bulldogs to 18-11 and 5-4 in the league. Georgia took an early 2-0 lead in the top of the first. Stephen Wrenn knocked the first pitch he saw from Gamecock starter Clarke Schmidt to right field for a home run and a RBI single off the bat of Jared Walsh drove in Skyler Weber. The Gamecocks cut the Bulldogs‘ lead in half with a run in the bottom of the first. Gene Cone led off with a double to left field and advanced to third on a wild pitch. Jordan Gore brought Cone home with a sacrifice fly to center. South Carolina tied the game at 2-2 plating a run in the bottom of the second. Alex Destino drew a leadoff walk and eventually scored on Clark Scolamiero‘s sacrifice fly to left field. Kyle Martin put the Gamecocks ahead 3-2 in the bottom of the third with a solo home run to right-center. The Gamecocks‘ increased their lead to 4-2 in the fifth inning on a second sacrifice fly from Gore that scored Cone. In the top of the sixth Georgia tied the game at 4-4 after a wild pitch from South Carolina reliever Vince Fiori scored Walsh and sacrifice fly from Mike Bell that scored Brandon Stephens. The Gamecocks reclaimed the lead in the bottom of the six with a solo home run off the bat of Taylor. South Carolina added three runs in the in the seventh to take an 8-4 lead over the Bulldogs. Max Schrock opened the frame with a walk and safely advanced to second on Kyle Martin‘s fielder‘s choice. A sacrifice bunt from Elliott Caldwell advanced both runners into scoring position before Patrick Harrington drew a walk to load the bases. Taylor followed with a sacrifice fly to bring home Schrock and a two-run double off the bat of Madison Stokes scored Martin and Harrington. Georgia pushed across a run in the top of the ninth to cut the Gamecocks‘ lead to 8-5 on a RBI double from Zack Bowers. Freshman right-hander Brandon Murray earned the win in relief. He worked 1.1 perfect innings and struck out one batter. He is now 3-0 on the year. Junior left-hander Jack Wynkoop picked up his first career save after hurling 2.1 innings while allowing one run on three hits and striking out three batters. Connor Jones suffered the loss for the Bulldogs after allowing four runs on three hits and three walks and striking out one batter in 2.0 innings of relief. GAME CHANGER Hunter Taylor‘s home run in the sixth inning broke a 4-4 tie. KEY STAT Freshman catcher Hunter Taylor and freshman infielder Madison Stokes combined 4-for-6 with four RBI in the victory. NOTABLES “¢ Clark Scolamiero made his first career start. “¢ Martin has reached base in 18 straight games and has a 15-game hitting streak. He tallied his team-leading sixth home run and 29th RBI of the season. “¢ Clarke Schmidt struck out a career-high eight batters. “¢ Gene Cone tied a career-high with three hits in a game and tallied eight hits in the series. “¢ Hunter Taylor notched his first career home run and tallied a career-high two RBI in the game. “¢ The Gamecocks had a Carolina Stadium record four sacrifice flies. “¢ Madison Stokes tied a career-high of two RBIs in a game. “¢ Jack Wynkoop earned his first career save. QUOTABLE Head Coach Chad Holbrook “First thing, on behalf of our baseball team, the program, coaching staff and players we want to congratulate Coach (Dawn) Staley and her team. Awesome, awesome accomplishment to go to the Final Four for the first time in school history. Coach Staley was with us on the plane ride back from Omaha after we won those national championships. It‘s a close-knit group on this campus. I got chill bumps when our crowd was cheering for them when the final horn sounded. That‘s a neat deal and we‘re awful proud of that. With that being said, the game was obviously a very important game for our team, the psyche of our team and the sanity of its coach. I asked the players to give us everything they had. I put some freshman in there and they did good job, Hunter Taylor had a big hit and Madison Stokes had a big hit. Clarke Schmidt handled adversity the right way and gave us a chance even though his line‘s not great. We lost the first two games and the first pitch Clarke throws gets hit in the seats. I like the way he gathered himself and gave us a fighting chance, ending that first inning with just two runs. Jack Wynkoop really bowed up for our team. Sometimes, over the course of the season you get the feeling that some games are more important than others and this game was important for a lot of reasons. It was really, really neat to see Jack want the ball in his hands and want the importance of this game in his hands. Other than that, we live to fight another day and we look forward to this week going on the road and hopefully playing a good solid game on Tuesday in Charleston.” UP NEXT The Gamecocks travel to Charleston S.C. on Tuesday to face The Citadel with first pitch set for 7 p.m. The game can be heard on the Gamecock IMG Network including flagship station, 107.5 FM, “The Game.”