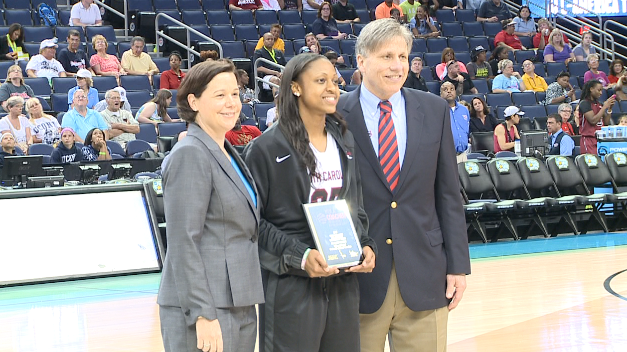 TAMPA, Fla. (USC SID) — South Carolina junior guard Tiffany Mitchell collected yet another award as the Women‘s Basketball Coaches Association (WBCA) announced her as a part of its 10-member team at a ceremony during the NCAA Women‘s Final Four Super Saturday festivities. Mitchell also earned the distinction last season when she became the program‘s first All-American since Jocelyn Penn in 2003. Senior forward Aleighsa Welch and freshman guard/forward A‘ja Wilson were named honorable mention All-Americans by the organization as well. Earlier this week, Mitchell became the first Gamecock to earn First-Team All-American honors from the Associated Press. Wilson (third team) and Welch (honorable mention) completed South Carolina‘s historic haul from the organization. The program‘s first USBWA All-American, Mitchell is was also named a Wooden Award finalist, making her a finalist for all three national player of the year awards, also a program first. Mitchell repeated as SEC Player of the Year this season as voted by the league’s coaches, adding the honor in the Associated Press list this season. A versatile guard, she is the only player the conference who completed the entire season and ranked in the top 15 in scoring (6th, 14.5 ppg), assists (10th, 2.9 apg) and steals (11th, 1.8 spg). Mitchell has led the team in scoring a team-high 17 times and has scored in double figures 28 times in 36 games this season. Even with so much focus on stopping her, the nation’s best teams have not succeeded as she averages 15.8 points, 4.7 rebounds and 3.4 assists in the Gamecocks’ 12 games against nationally ranked opponents, during which they are 10-2 this season. In the NCAA Tournament action, Mitchell’s production has hit another level as her 15.0 points and 5.0 assists per game have powered the Gamecocks into their first-ever NCAA Women’s Final Four. With South Carolina trailing by two in the final three minutes of its first NCAA Elite Eight appearance, Mitchell took over – assisting on Welch’s game-tying basket, hitting a layup, draining a 3-pointer, grabbing her own offensive rebound and hitting two free throws that put the Gamecocks up by five with 27 seconds remaining. Her effort against No. 15/12 North Carolina in the Sweet 16 and No. 7/7 Florida State in the Elite Eight, which included a team-high five assists and six rebounds, earned her a spot on the NCAA Greensboro Regional All-Tournament Team. The SEC Freshman of the Year and First-Team All-SEC honoree, Wilson is second on the team in scoring with 12.9 points per game on 51.3 percent field goal shooting. Wilson did not shy away from lofty expectations after joining the Gamecocks as the No. 1 recruit in the nation, reaching double figures in 28 of 36 contests this season while producing five double-doubles. The versatile player scored 218 points in just 329 minutes of SEC regular-season action and ended the regular season with a South Carolina freshman record-setting 19-rebound performance against No. 13/15 Kentucky. In the NCAA Tournament, the Hopkins, S.C., native is scoring 10.5 points per game on 63.6 percent shooting (14-of-22). The Gamecocks’ emotional leader, Welch is South Carolina’s record holder with 440 career offensive rebounds and ranks third in total rebounds and is one of just four Gamecocks all-time to score 1,000 points and 900 rebounds in her career. Against the top competition, the program’s first SEC Scholar Athlete of the Year is at her best, leading South Carolina to a program-record 10 wins over ranked opponents by averaging 9.6 points and 8.6 rebounds in 12 games against top-25 teams compared to 8.8 points and 5.4 rebounds in the Gamecocks’ other 24 contests. The forward has notched four double-doubles in the last 14 games. 2015 WBCA Division I Coaches‘ All-America Team Brittany Boyd, Sr., G, California Nina Davis, So., F, Baylor Moriah Jefferson, Jr., G, Connecticut Samantha Logic, Sr., G, Iowa Jewell Loyd, Jr., G, Notre Dame Kaleena Mosqueda-Lewis, Sr., F, Connecticut Tiffany Mitchell, Jr., G, South Carolina Breanna Stewart, Jr., F, Connecticut Elizabeth Williams, Sr., C, Duke Amanda Zahui B., Sr., C, Minnesota