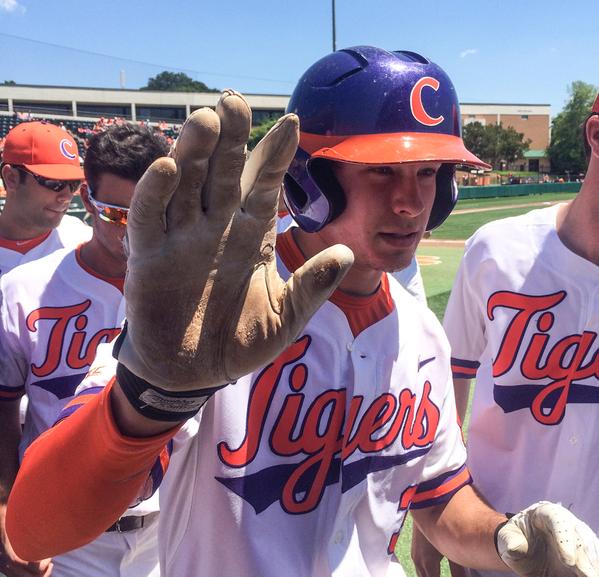 CLEMSON, S.C. (CU SID) — Behind three runs in the first inning, two runs in the third inning, four runs in the seventh inning and another strong outing from Matthew Crownover, Clemson defeated No. 3 Louisville 9-1 at Doug Kingsmore Stadium on Saturday afternoon. The Tigers, who took a 1-0 lead in the series, improved to 24-21 overall and 13-11 in the ACC. The Cardinals fell to 35-11 overall and 19-3 in ACC play. It was the first-ever meeting as ACC foes and the first meeting since 1972. Run-scoring singles by Reed Rohlman, Chase Pinder and Weston Wilson in the first inning gave Clemson a 3-0 lead, then Rohlman and Wilson, who went 3-for-4 with three RBIs, hit run-scoring singles in the third inning. Brendan McKay lined a two-out single in the sixth inning to score Sutton Whiting, but Clemson responded with four runs in the seventh inning, highlighted by Steven Duggar‘s run-scoring double. Crownover (8-1) earned the win by allowing just five hits, one run and three walks with four strikeouts in 7.0 innings pitched. Louisville starter Kyle Funkhouser (6-3) suffered the loss, as he allowed seven hits, five runs and no walks with two strikeouts in 6.0 innings pitched. “This was one of our better games,” said Head Coach Jack Leggett. “Matthew (Crownover) continued to do his thing and was exceptionally good with men on base. He’s a great competitor. Then, Alex Bostic came in and did a really nice job for us in relief. “We played really good defense and were aggressive offensively. I’m really pleased with how we played today. We got hits with men on base, and that always gives you confidence. It was important to come out early and get some confidence. From start to finish, we played a good nine innings.” The series continues Sunday at 6:30 p.m. on ESPN3. Fans can purchase two reserved adult and two reserved youth tickets for only $20. Youth 12 and under receive free admission by showing their report card. It is also Sunday Funday, with family-friendly activities during the game and throughout Doug Kingsmore Stadium.