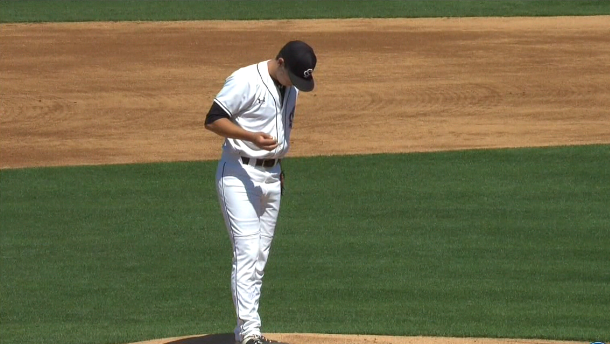 COLUMBIA, S.C. (USC SID) — South Carolina jumped out to a 2-0 lead but Auburn rallied with two runs apiece in the seventh, eighth and ninth innings on the way to a 6-2 victory over the Gamecocks. The Tigers improve to 31-17 and 11-12 in the SEC while the loss drops the Gamecocks to 27-20 and 10-13 in league play. Auburn starter Rocky McCord allowed just two runs, one earned, on four hits and three walks while striking out four batters in seven innings of work to pick up the win. He is 5-3 on the year. Cody Mincey suffered the loss in relief for South Carolina after giving up one run on two hits and walking one batter in one inning of work. He is now 2-3 for the season. Auburn reliever Izaac Yarbrough pitched two scoreless innings of relief for his first save of the year. The Gamecocks scored a run in the second and third inning to take a 2-0 lead. Elliott Caldwell drew a walk to lead off the bottom of the second, advanced to third after a single from Alex Destino and a sacrifice bunt by DC Arendas before scoring on Connor Bright‘s RBI groundout. Caldwell drove in Gore in the third on a bases loaded walk. The Tigers scored six runs in the final three innings to go ahead 6-2 over South Carolina. A pair of RBI singles off the bats of Cody Nulph and Sam Gillikin drove in two runs in the top of the seventh while a sacrifice fly from Daniel Robert and a fielding error scored two more in the eighth. In the top of the ninth Kyler Deese‘s squeeze bunt brought home Nulph and Deese then scored on a RBI single from Melvin Gray. GAME CHANGER The Tigers’ two-run eighth inning gave them a 4-2 advantage over South Carolina. KEY STAT From the fourth to the ninth the Gamecocks were limited to just three singles. NOTABLES one space· Taylor Widener‘s seven strikeouts is a career-high. Widener pitched a season-high five-plus innings and allowed just one hit and two walks. He did not allow a run. one space· Kyle Martin went 2-for-3 at the plate and has reached base seven of nine plate appearances this weekend with a sacrifice fly as well. QUOTABLE Head Coach Chad Holbrook “I thought we got off to a pretty dang good start. I couldn‘t ask anything more out of Taylor Widener. He threw five innings, punched out seven and gave us a great chance to win. If someone had told me he was going to throw like that before the game I would‘ve liked our chances. But, we had a couple of scoring opportunities there that could have added to our 2-0 lead. We had bases loaded with one out and [Alex] Destino up and we just couldn‘t get a run across. Sometimes our scoring opportunities are few far and between and we have to maximize them, and we didn‘t today. Two runs is asking too much of our pitching staff to hold Auburn off, to win a game 2-0 or 2-1. Auburn‘s just too solid of a team offensively. Our bullpen didn‘t throw the ball particularly well; two runs in three consecutive innings, you‘re not going to win a ball game that way. But Taylor [Widener] was the bright spot today obviously. The series is at stake tomorrow and a lot of things are at stake tomorrow from where were concerned. I hope we‘ll come down here ready to play, ready to compete and ready to fight. Obviously it‘s an important game.” UP NEXT The Gamecock and Tigers conclude the series on Sunday with first pitch set for 2:00 p.m. at Carolina Stadium. The game will be televised on ESPNU and can be heard on the Gamecock IMG Network including flagship station, 107.5 FM, “The Game.”