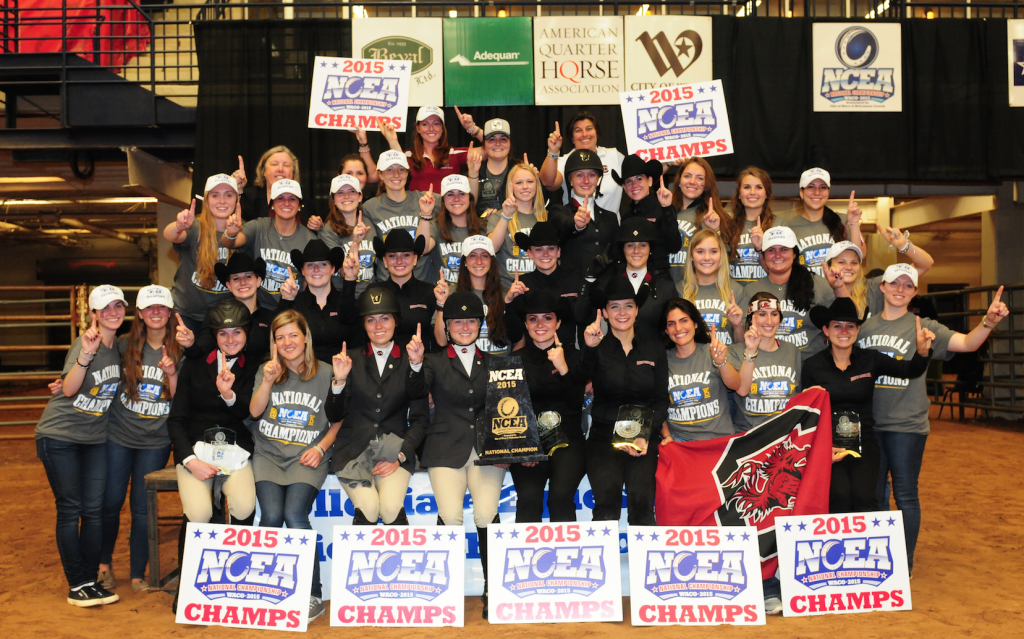 COLUMBIA, S.C. (USC SID) — Defending national champion South Carolina has announced its schedule for the 2015-16 season, featuring five competitions against teams that advanced to the semifinals at last year‘s national championship. For the first time in the dual meet era, the Gamecocks will open the regular season on the road in back-to-back seasons. South Carolina will travel to Brookings, S.D. to face South Dakota State in the season opener on September 25. One week later, Carolina returns to Blythewood for the first of two home meets in eight days. On October 2, the Gamecocks will face TCU in their home opener, marking the first regular season meeting between the two teams since September 30, 2011. One week later on October 9, the Gamecocks open SEC play when they host Auburn, which advanced to the national championship semifinals last season. South Carolina will then begin a stretch of four straight road meets against teams that advanced to their respective conference championship finals last season. Three of those meets will take place in a span of just 10 days. The Gamecocks will look to snap a four-meet losing streak in College Station when Carolina faces Texas A&M on October 29. The Gamecocks return to Texas the following weekend for a pair of non-conference meets. South Carolina will face Big 12 champion Baylor on November 6 in Waco, followed by a meet at United Equestrian Conference runner-up SMU on November 7. The Gamecocks went a combined 3-0 against the Bears and Mustangs last season, outscoring the two opponents, 35-14. South Carolina will close out its fall schedule on November 20 when the Gamecocks travel to Bishop, Ga. to face Georgia in a rematch of the last two national championship meets. The Gamecocks open their spring schedule with three straight home meets before closing out their regular season slate with three straight road meets. Carolina kicks off its spring schedule on January 30 when the Gamecocks host Tennessee Martin in Blythewood. One week later, the Gamecocks will host Georgia in their spring SEC opener on February 6, which will also serve as the team‘s annual Equifest Kids Day. Two weeks after the Georgia meet, South Carolina will host Texas A&M on February 20 in its final home meet of the season. Before the competition, the Gamecocks will recognize their eight seniors in a Senior Day ceremony. One week later, the Gamecocks will close out their regular season with three straight road meets in a span of eight days. On February 27, the Gamecocks will travel to face Auburn for the spring meeting in the home-and-home series with the Tigers, which will also wrap up Carolina‘s SEC schedule. The Gamecocks‘ regular season finale will be on March 4 as Carolina travels to Dover, Del. for a pair of meets against Delaware State and SMU. The 2016 SEC Championship will take place March 25-26 in Athens, Ga. The 2016 National Collegiate Equestrian Association (NCEA) National Championship will take place April 14-16 in Waco, Texas. Admission is free to all University of South Carolina equestrian meets, which take place at One Wood Farm in Blythewood. Fans can follow the Gamecock equestrian team on Twitter, Facebook, and Instagram.